Mohr’s salt is popular for crystal growing because it gives nice green crystals, which are also stable in air.

I jumped with excitement.

My order of ammonium sulfate and iron (II) sulfate powder had arrived.

Having successfully grown iron sulfate crystals a few weeks ago using solution I made from scratch, it was time to move on to something new. I now had all I needed to grow Mohr’s salt crystals.

Mohr’s salt is a double salt made up of both ammonium and iron (II) ions in a 1:1 ratio. It is also called iron (II) ammonium sulfate.

Part of the reason I was so excited was because Mohr’s salt is supposedly much more stable compared to pure iron (II) sulfate. This means it does not oxidize and turn brown easily.

As oxidation was a big problem in my attempt at growing pure iron sulfate, this was a huge bonus.

To start things off, I decided to do a test run. I weighed out 20g of iron sulfate powder and 17.4g of ammonium sulfate powder. This corresponded with a 1:1 molar ratio.

Next, I dissolved the two compounds in 116 ml of water, and heated the solution using a hot plate. At first, everything was beige and cloudy, looking exactly like watery Milo. Then, after 10 minutes of vigorous stirring, the solution cleared up and turned the brown color of rust. 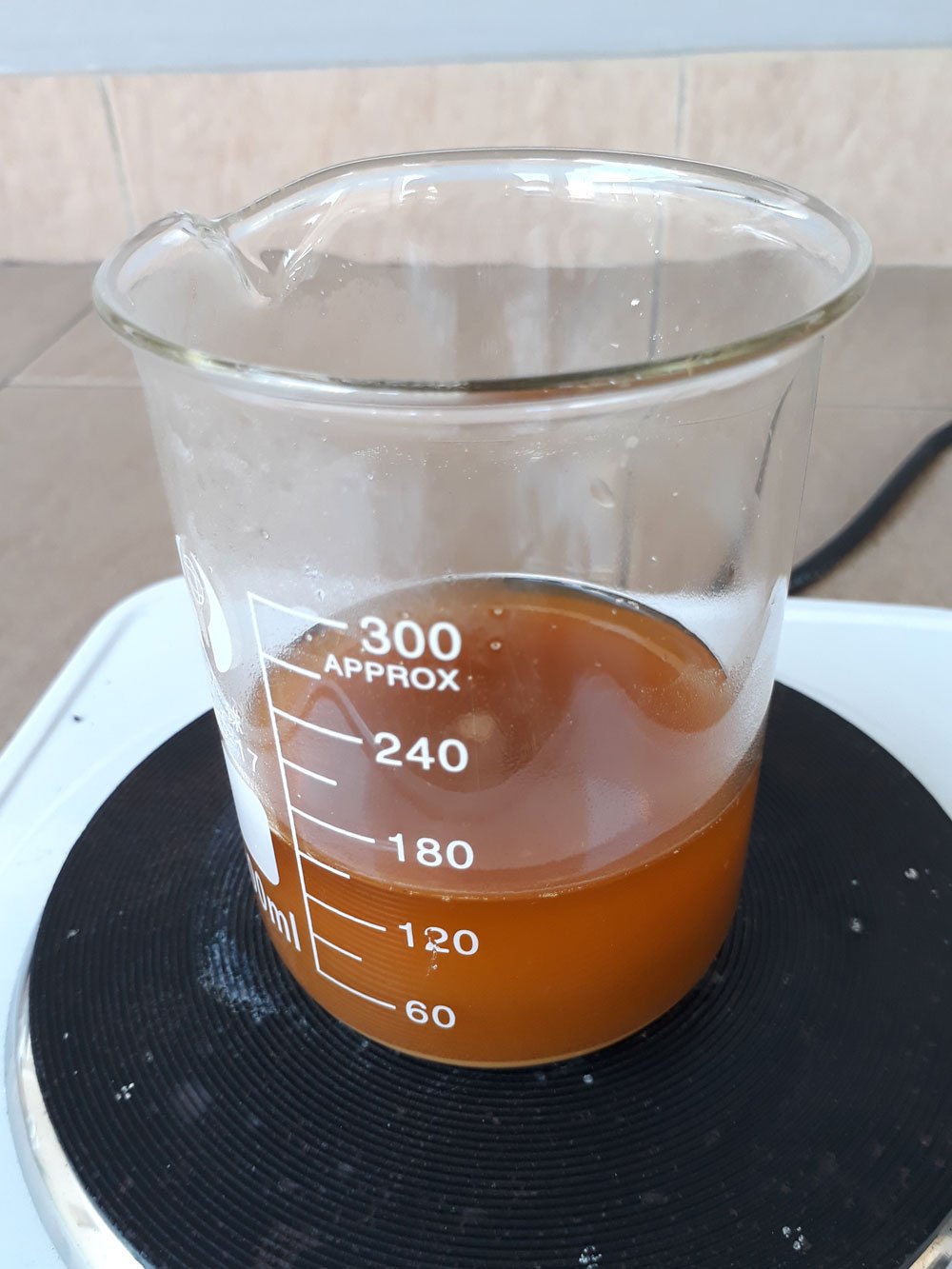 As a solution of Mohr’s salt is supposed to be green, this wasn’t a good sign. It meant that there was a bunch of brown iron oxides and hydroxides in the solution.

I let the brown solution cool down, and sure enough, the top part started to turn from brown to yellow, and what looked like mud started settling to the bottom. After a few more hours, the top of the solution became greenish. 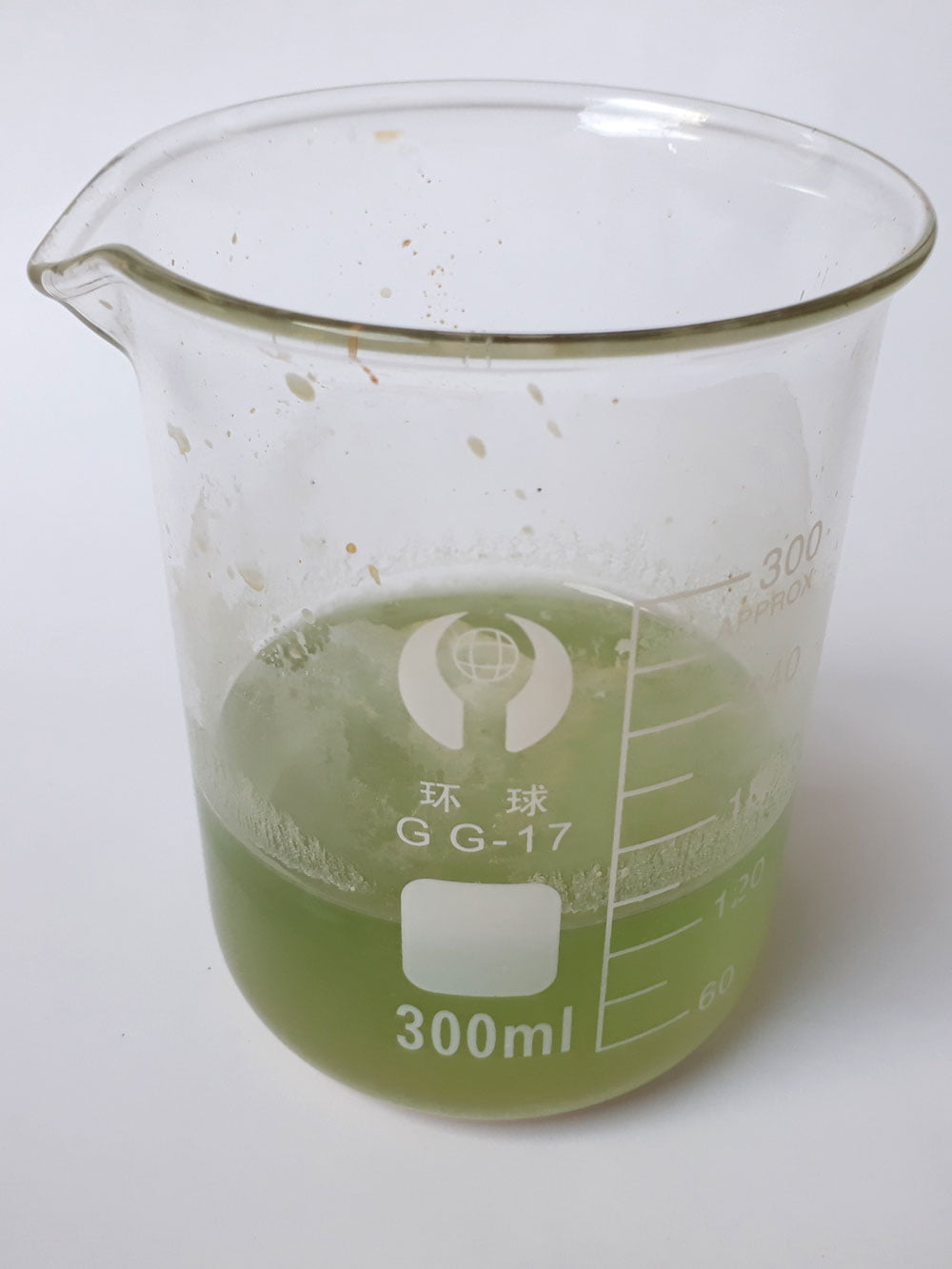 On the second day, my Mohr’s salt solution was a pale green, while the bottom of the beaker was covered in a layer of sediment. I carefully decanted off the solution and filtered it. I ended up with this beautiful liquid. 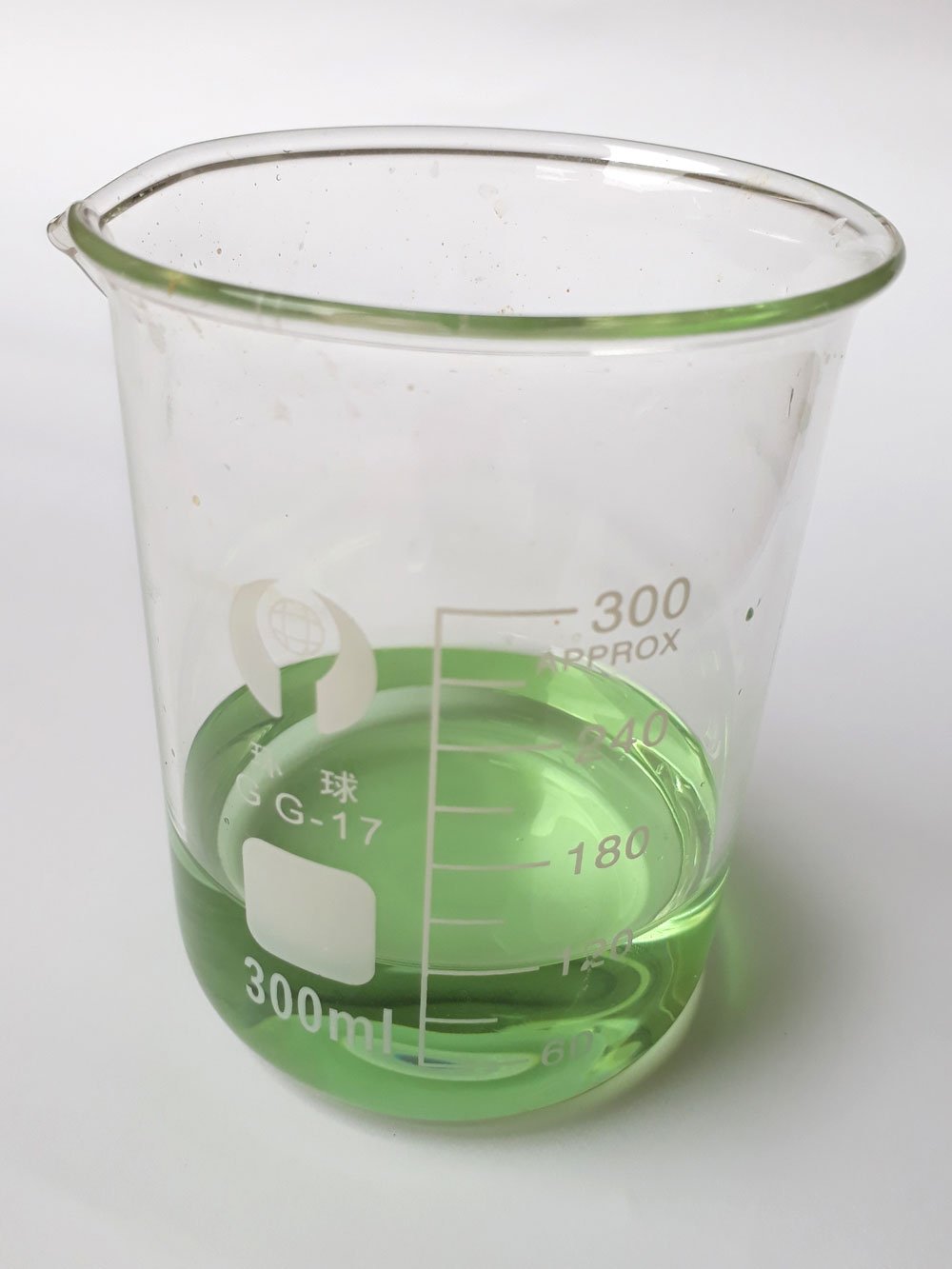 Based on my calculations, the solution was already saturated, and thus, ready for crystal growing. However, no crystals were forming. This is a common problem when growing crystals for the first time – as they need a nucleation site to “kick start” the crystallization process.

To solve this problem, I dipped a glass rod into the solution, removed it, and let it dry. Soon, tiny crystals began to form on the glass rod.

Then, I dipped the glass rod back into the solution to knock some crystals off. These would act as seeds to initiate crystal growth.

Sure enough, small crystals started growing at the bottom. They got bigger as extra salt in the supersaturated solution started to deposit on them. After just a day, there was a mass of crystals at the bottom of the beaker. 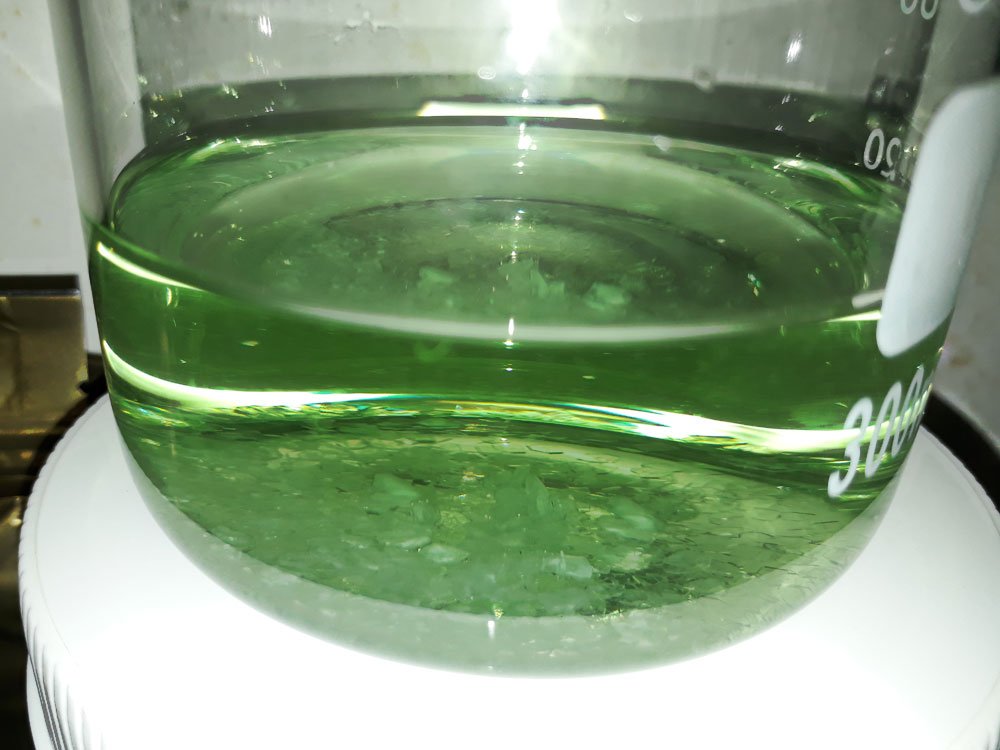 But it wouldn’t do. I wanted clear single crystals. So, I decanted the solution into a second beaker, leaving the crude crystals at the bottom of the first one. As I had already seeded the solution with crystals, there was no need for me to repeat the process with the glass rod again.

Furthermore, I partially covered the top of the second beaker with a piece of filter paper. This was to slow down evaporation, so that the crystals would grow more slowly. It’s the golden rule of crystal growing – the slower you grow your crystals, the more pretty they’ll be.

I was delighted when new crystals formed at the bottom of the second beaker within hours. And unlike the crude crystal mass, these were small, flat, and completely transparent. They were also shaped like hexagons. Perfect! 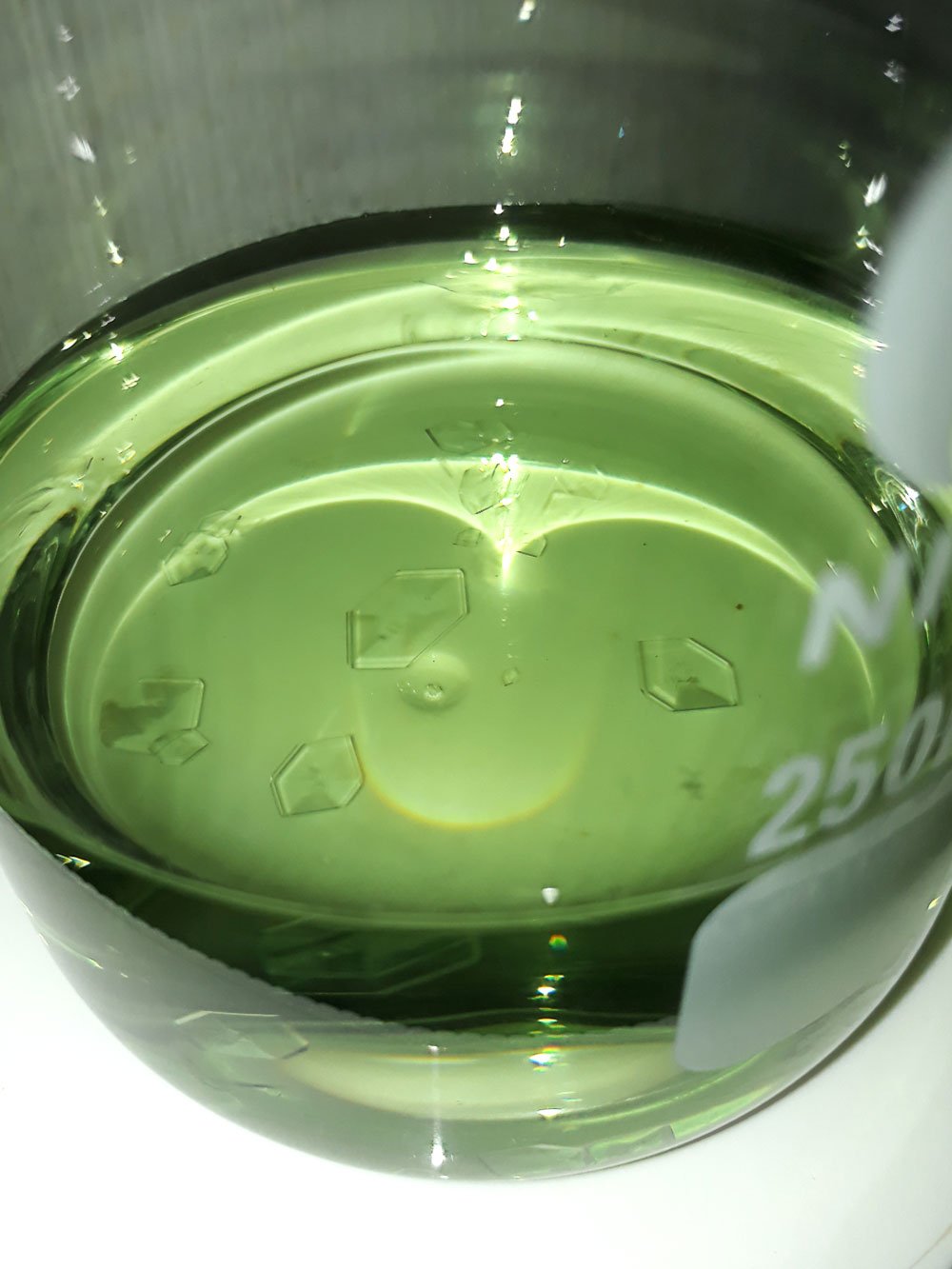 Over time, more and more hexagonal crystals appeared. Meanwhile, the existing ones grew quite quickly. Within 2 days, the largest was already over 1 cm in length.

I decided to remove them from solution on the 4th day, as they were at risk of fusing with each other. To stop growing the crystals, I decanted the solution one more time into a third container, and used a pair of tweezers to remove the leftover crystals in the second beaker. 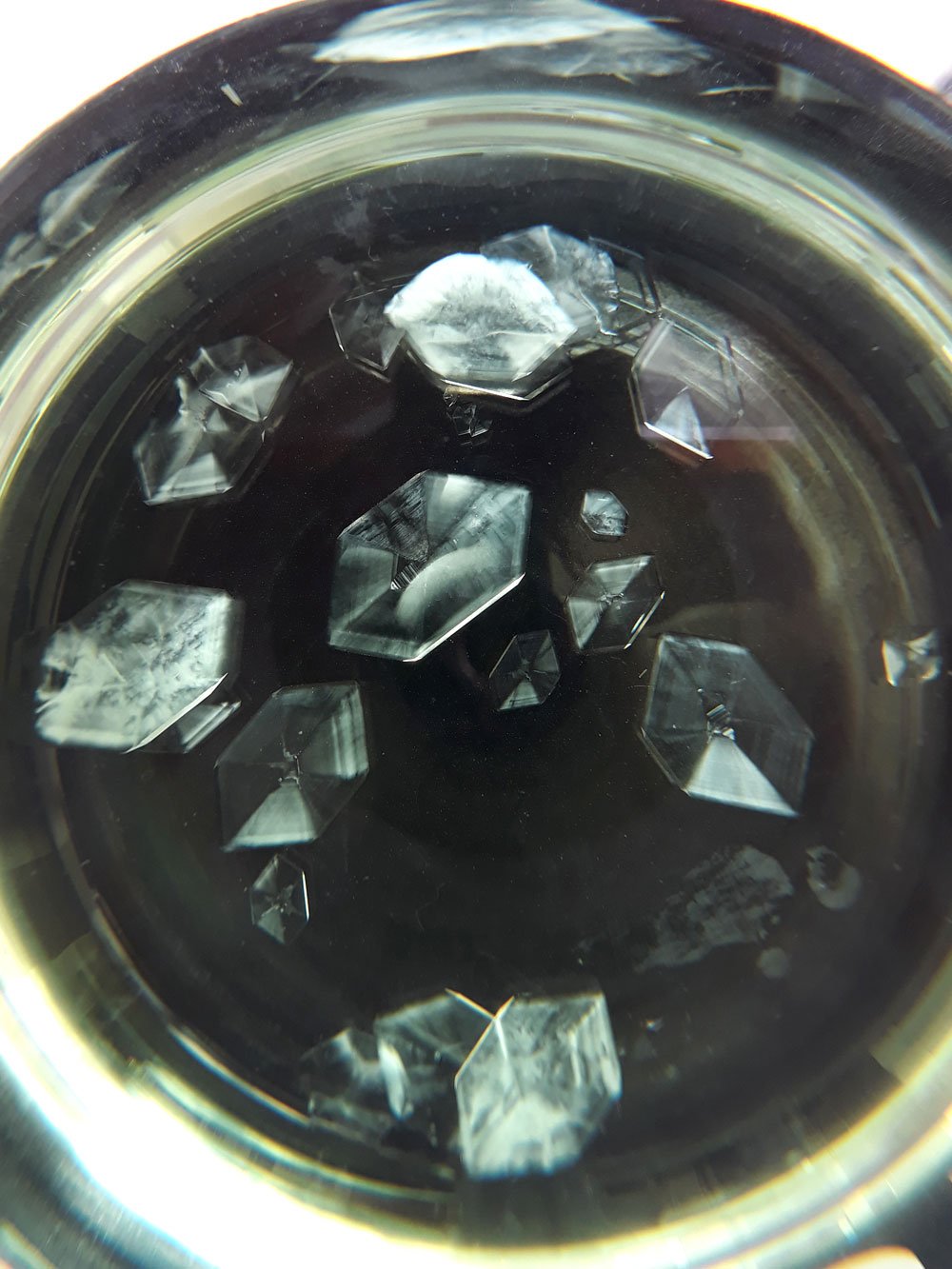 Then, I dried them on a piece of filter paper.

The Mohr’s salt crystals were all hexagonal – and extremely flat. I’ve heard that this is because they were grown from a pure solution. In other words, the solution is still fresh, and not contaminated with iron (III) ions. As the solution steadily turns browner, the crystals also change shape. I’ll be sure to investigate this further.

But for now, I admired the gems that I had just created. Since they were so flat, they were also super clear. Clear enough that you can see through them and barely notice the difference. 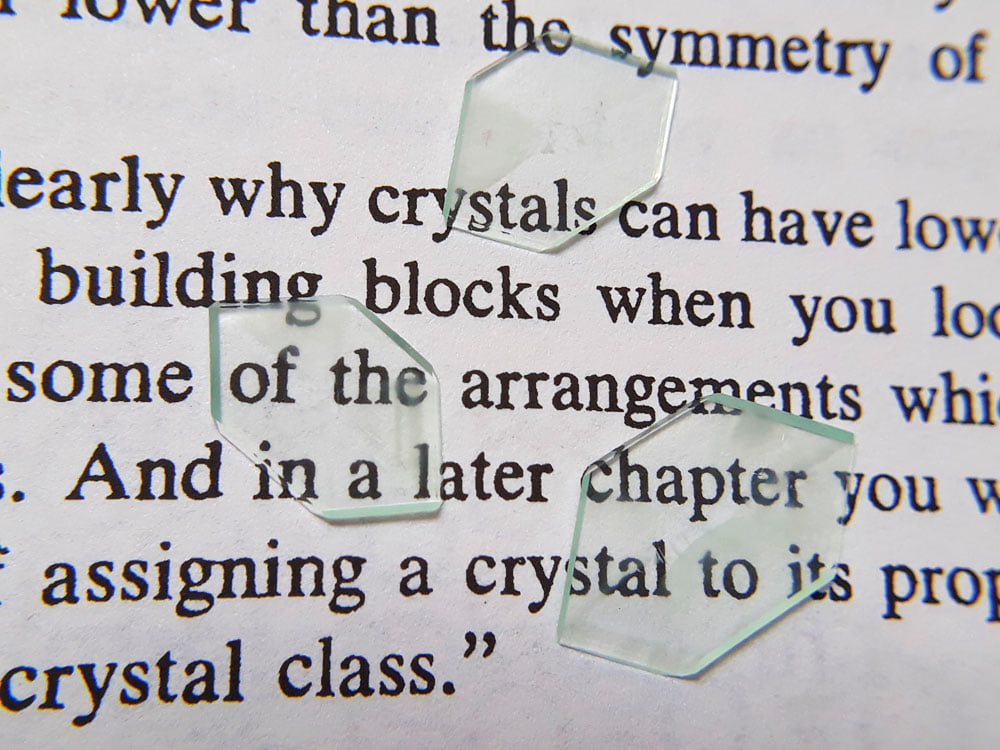 Another surprising thing was that they had a different color as compared to pure iron (II) sulfate. The Mohr’s salt crystals looked pale green instead of blue-green, and in some places, even milky white. This was very interesting, as iron (II) ions are the source of color for both the compounds.

As this was just a trial run, I’ll be sure to grow much larger crystals, as well as investigate the cause of their flatness in the future. From what I’ve seen, there are no pictures of Mohr’s salt single crystals as flat as mine on the Internet. Weird.

But for now, sit back and enjoy some pictures! 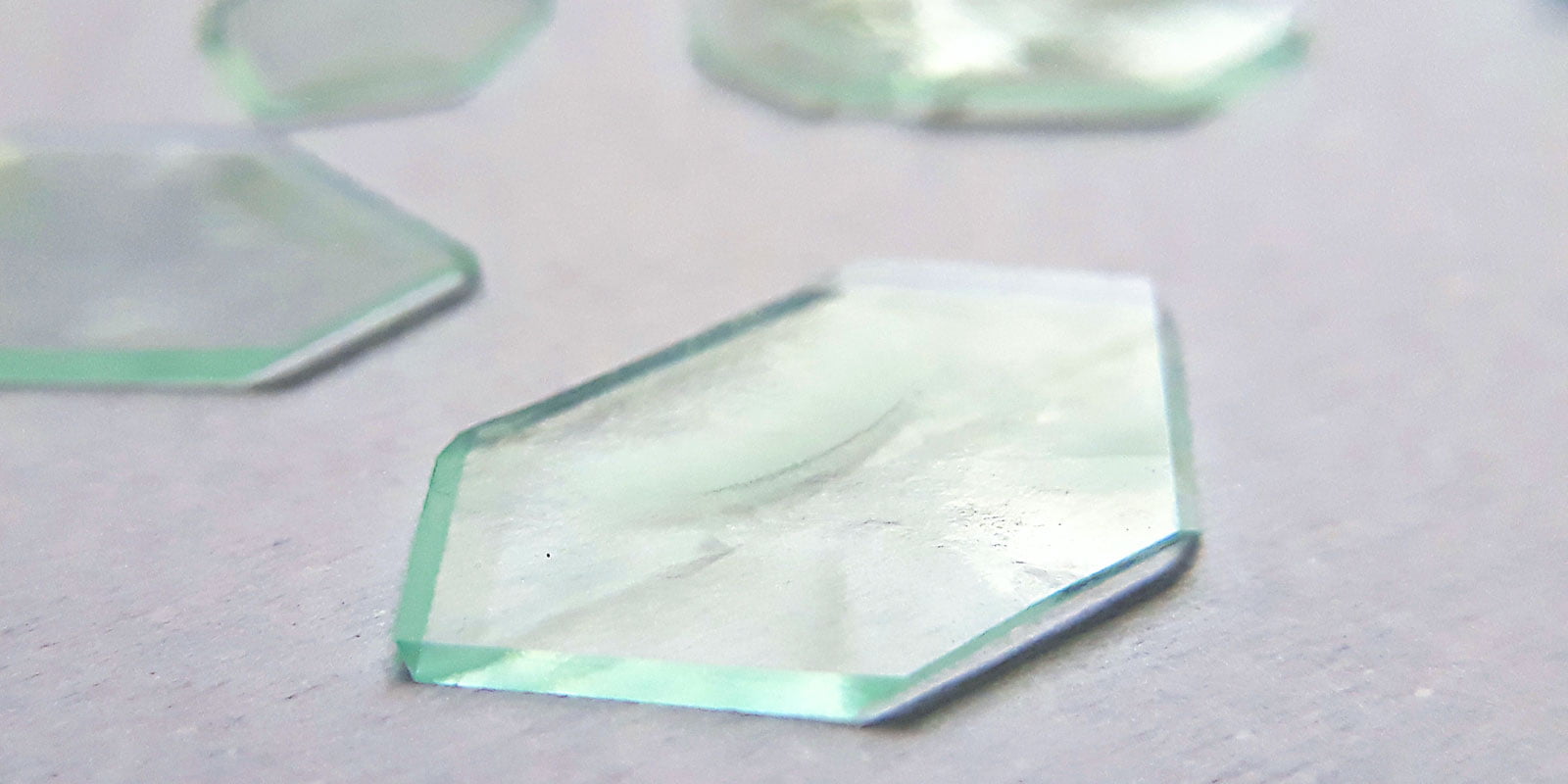 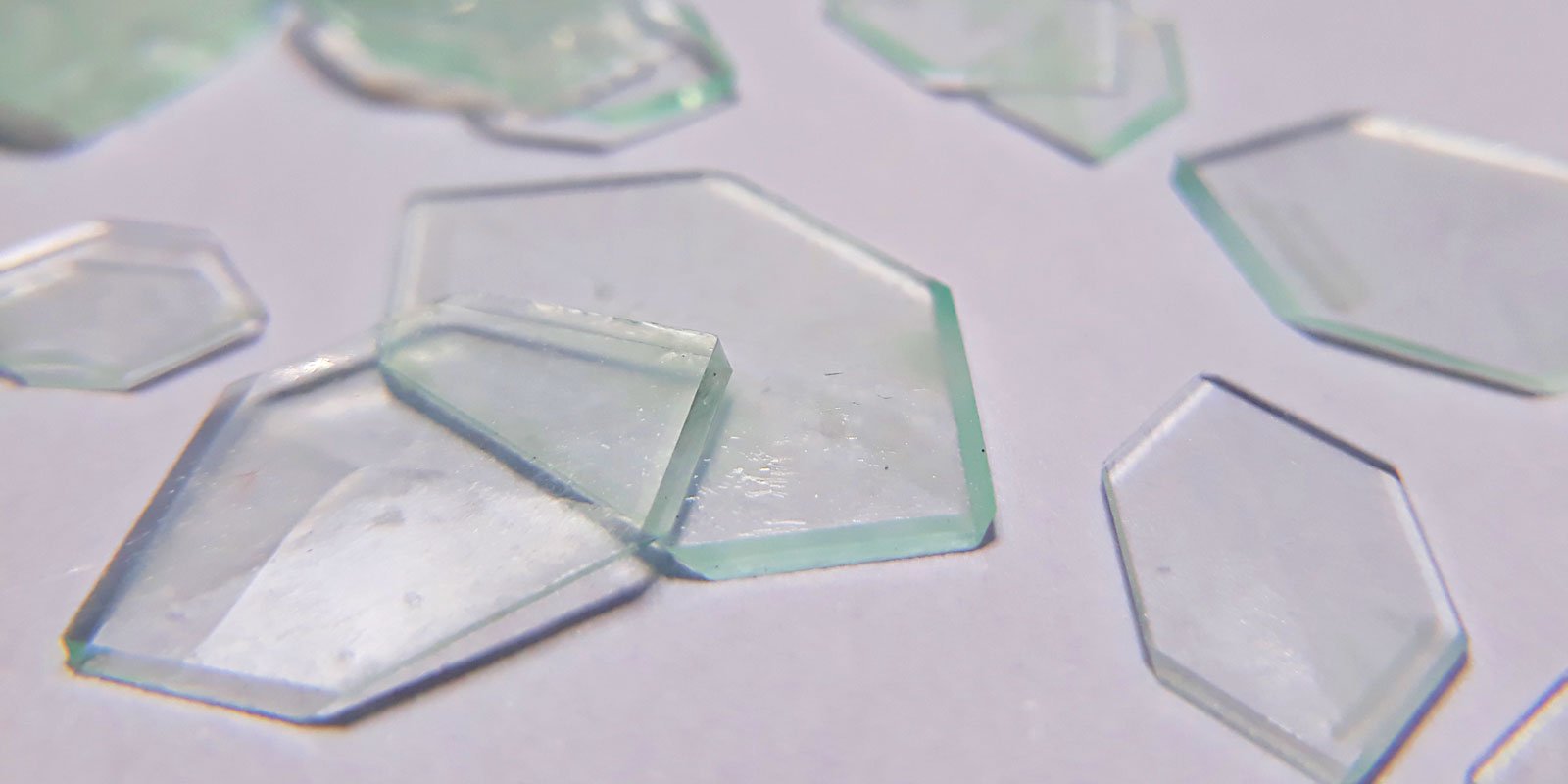 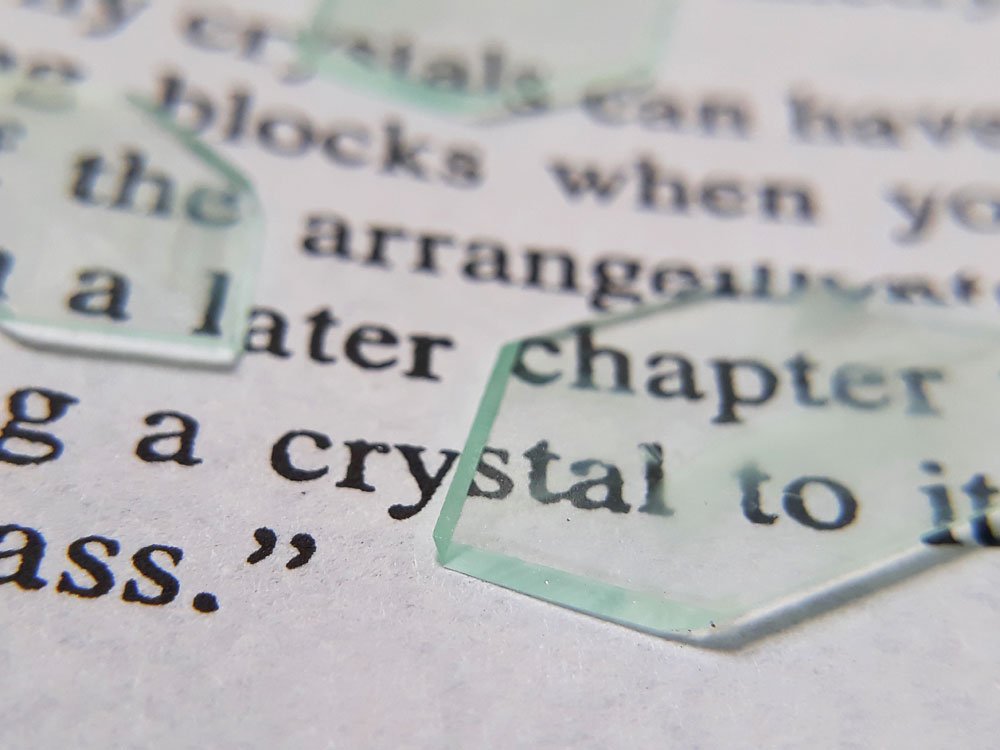 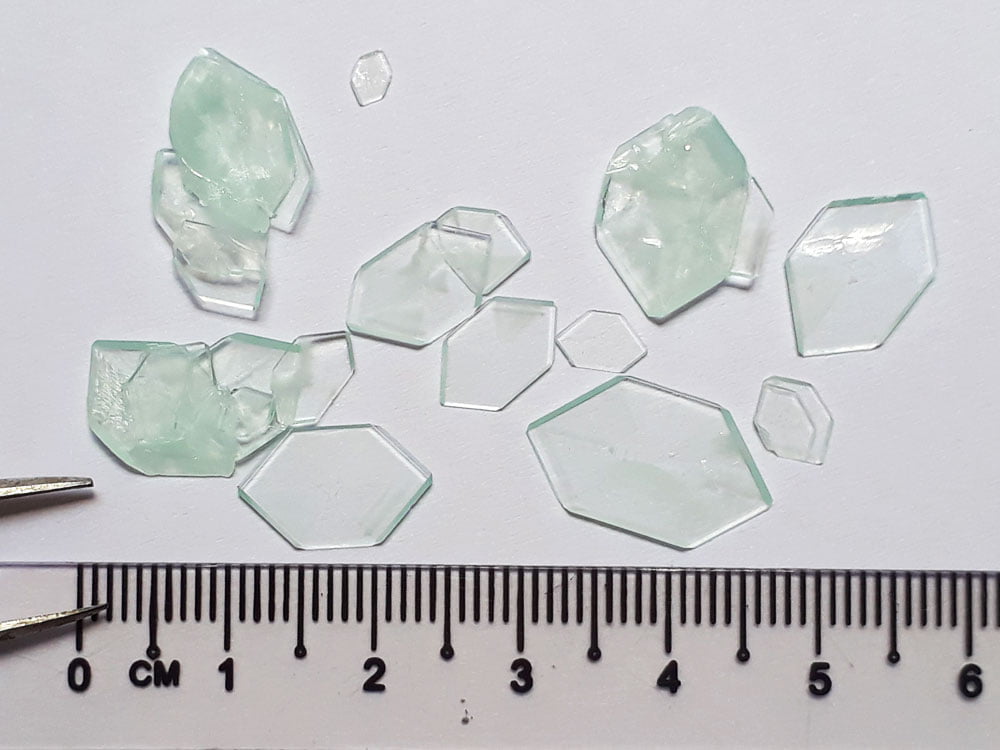 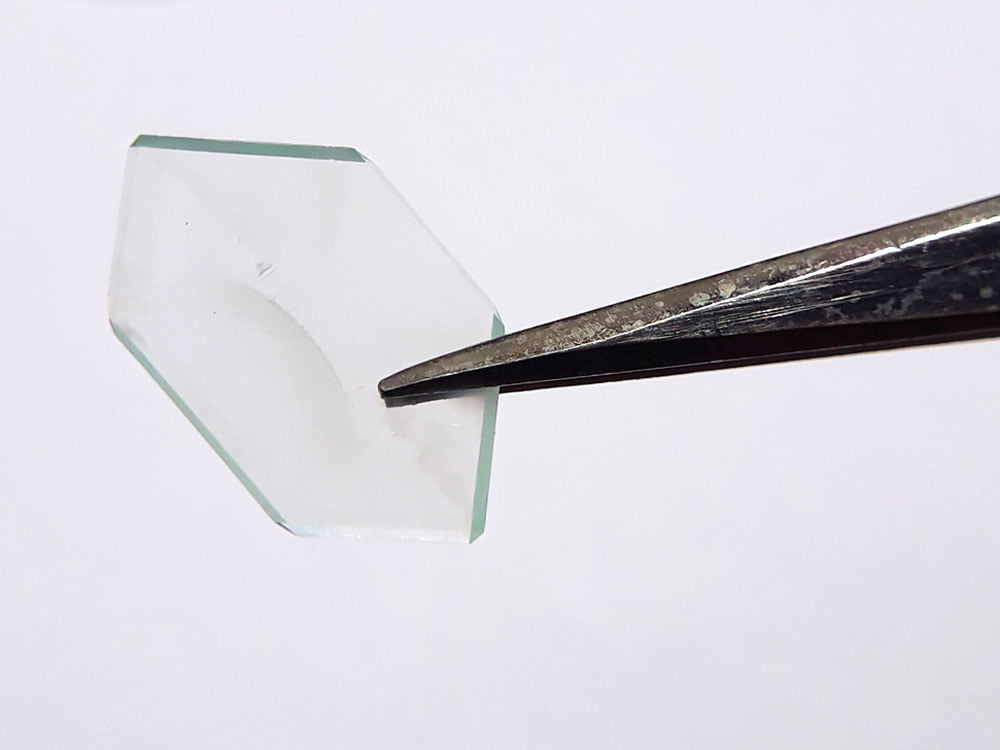 How I Grew These Gorgeous Iron Sulfate Crystals at Home