Iron (II) sulfate can be tricky to work with, but it forms unique blue-green crystals.

I love growing crystals. Actual crystals. It’s been 2 years since I fell in love with this hobby in chemistry class, and I’m still making discoveries every day.

As I don’t have access to a lot of chemicals, I chose a compound that I could make myself. It’s called iron (II) sulfate – which is basically the product of a reaction between iron nails and battery acid. Now, I couldn’t just rip open Dad’s car and steal the battery, so I used another method to obtain the iron (II) sulfate – electrolysis.

I started off with a saturated solution of blue copper sulfate (a type of rootkiller) which had taken me two weeks to purify. For my source of iron, I went to a hardware store and bought a steel wrench. The idea was to force the copper out of solution and replace it with iron.

To make things happen, I took out my trusty power supply and connected the wrench to the positive terminal and a piece of copper as the negative terminal. 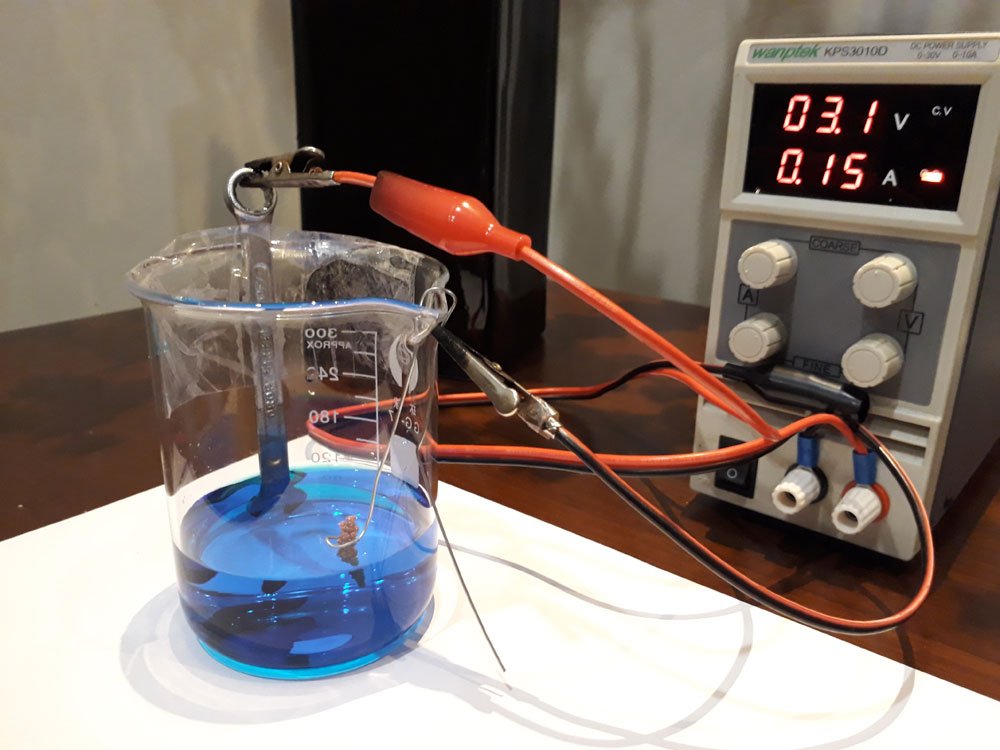 After pouring the blue solution into a beaker and putting the electrodes into place, I flipped on the switch.

Absolutely nothing happened, and all I could hear was a faint buzzing sound. But after 2 hours, bits of the carbon in the wrench started to flake off.

After 4 hours, the part of the wrench sitting inside the solution started to get eaten away.

The next morning, the bottom part of the wrench had completely dissolved. The beaker was filled with carbon, dirt and impurities, while a large clump of copper had formed on the negative terminal.

This was good news, as it meant that the blue copper ions were getting discharged, forming copper metal. Meanwhile, green iron (II) ions took their place. Sure enough, the color of the solution changed from an intense blue to a lighter turquoise. 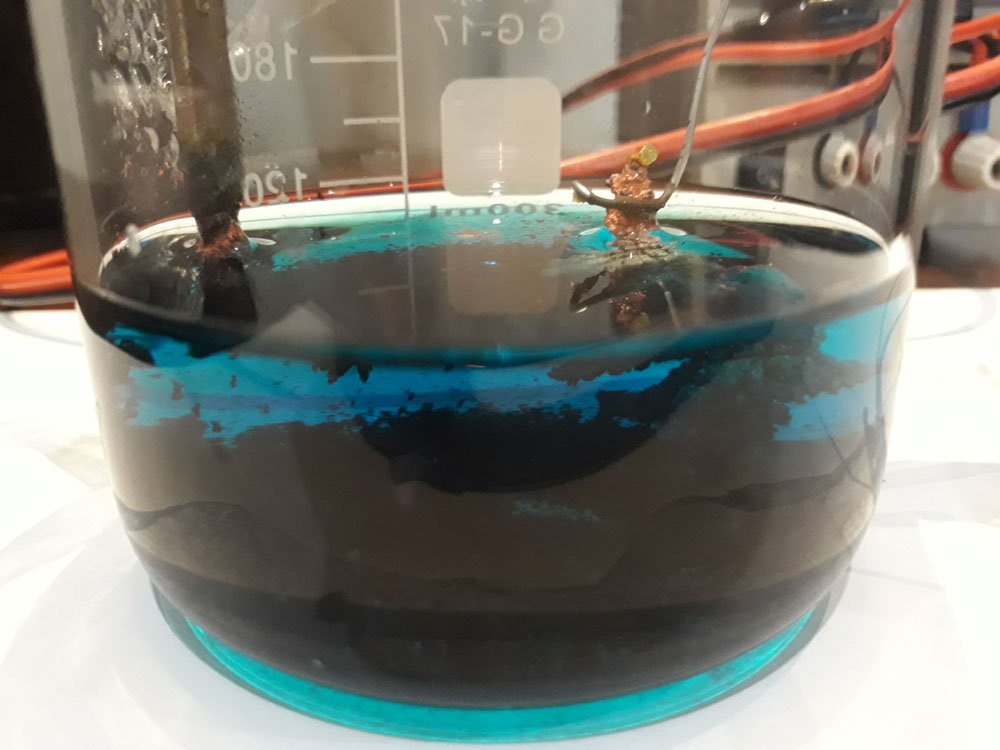 Over the course of the day, the solution turned steadily greener. By the time I went to bed, it looked like this:

When I woke up, I had a nasty surprise. The solution had turned brown, and what looked like bits of mud were floating around.

The thing about chemistry is that reality is always far more complicated than the theory inside a textbook. Although the product I wanted was green iron (II) sulfate, brown iron (III) hydroxide had formed overnight. This was likely because the solution wasn’t acidic enough.

Luckily, I managed to fix this by adding a few drops of sulfuric acid I had made previously. After some swirling, the brown goo vanished. I filtered everything, and ended up with 120 ml of a nice green solution of iron (II) sulfate. 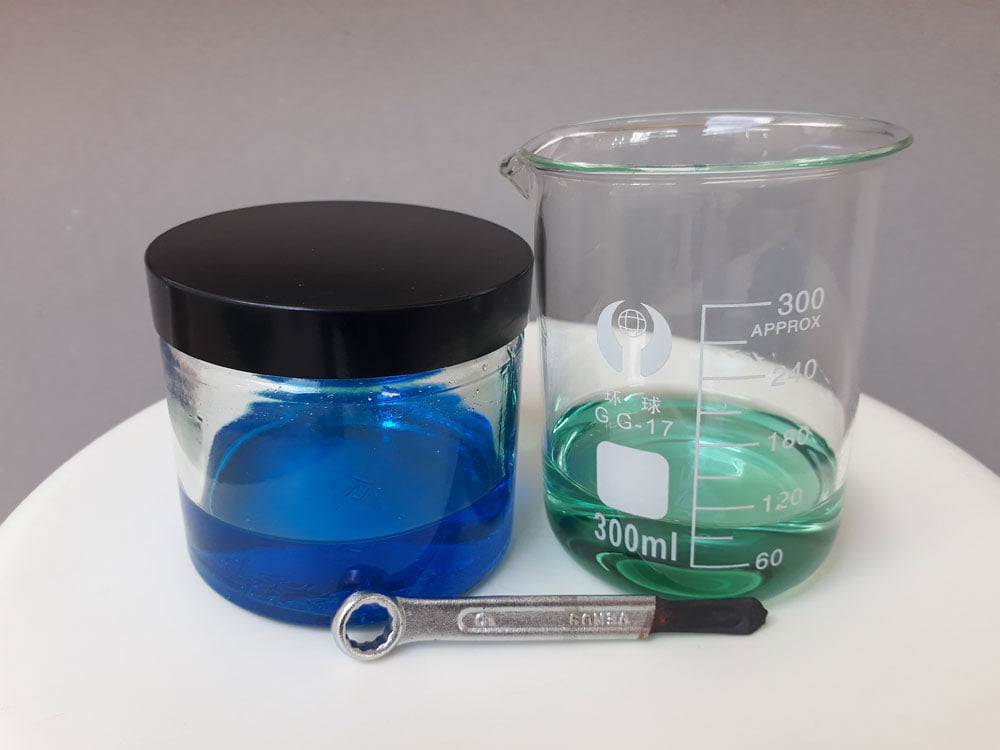 Although the solution was quite concentrated, it still wasn’t good enough to grow crystals with. I had to further evaporate the water until it reached the saturation point. So I let it sit quietly in the storeroom.

After 5 days, I was pleasantly surprised to see tiny crystals at the bottom of the beaker. 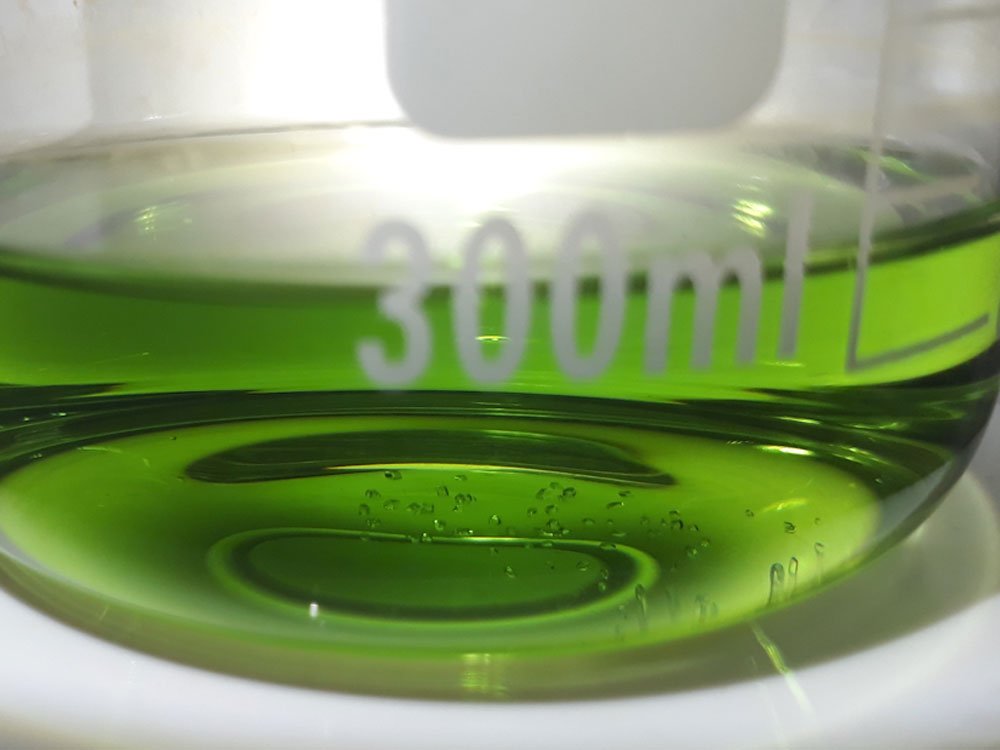 Using tweezers, I gently picked out 3 nicer crystals and transferred them, along with the solution into a smaller container. I then closed the lid halfway to slow down evaporation to get higher quality crystals – because the slower you grow them, the nicer they’ll be. 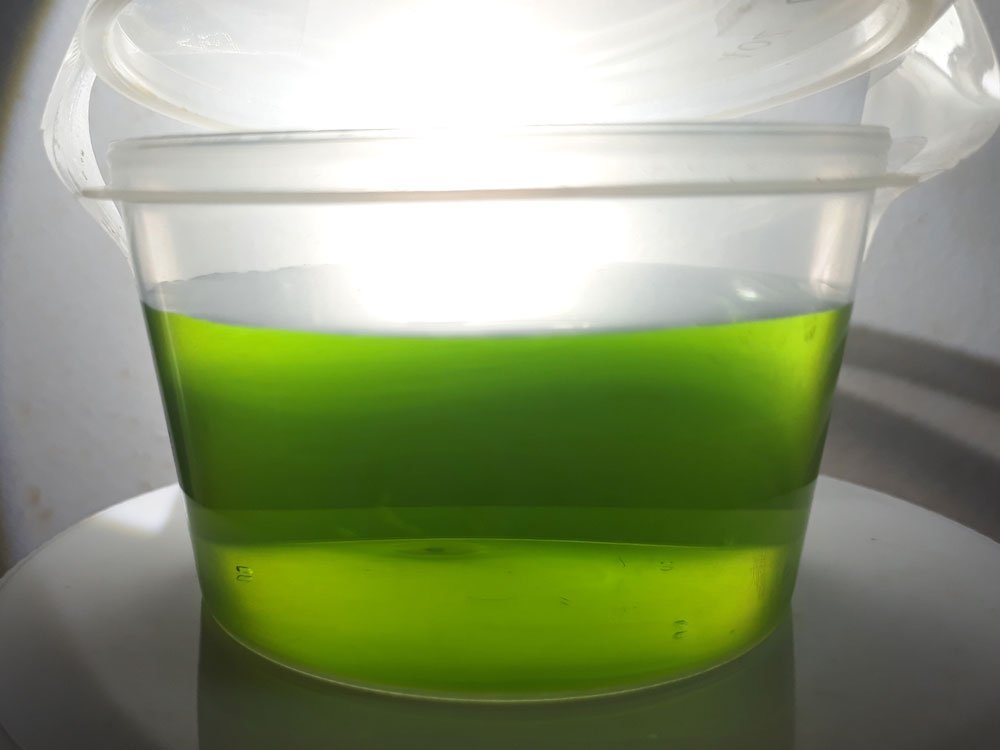 Day by day, the crystals got bigger.

Wait too long, and insoluble hydroxides will form, messing up the crystals and forming gooey muck. Adding sulfuric acid can slow down the process, but I could only add a few drops because I was rather short on it.

Still, it was an eventful week. 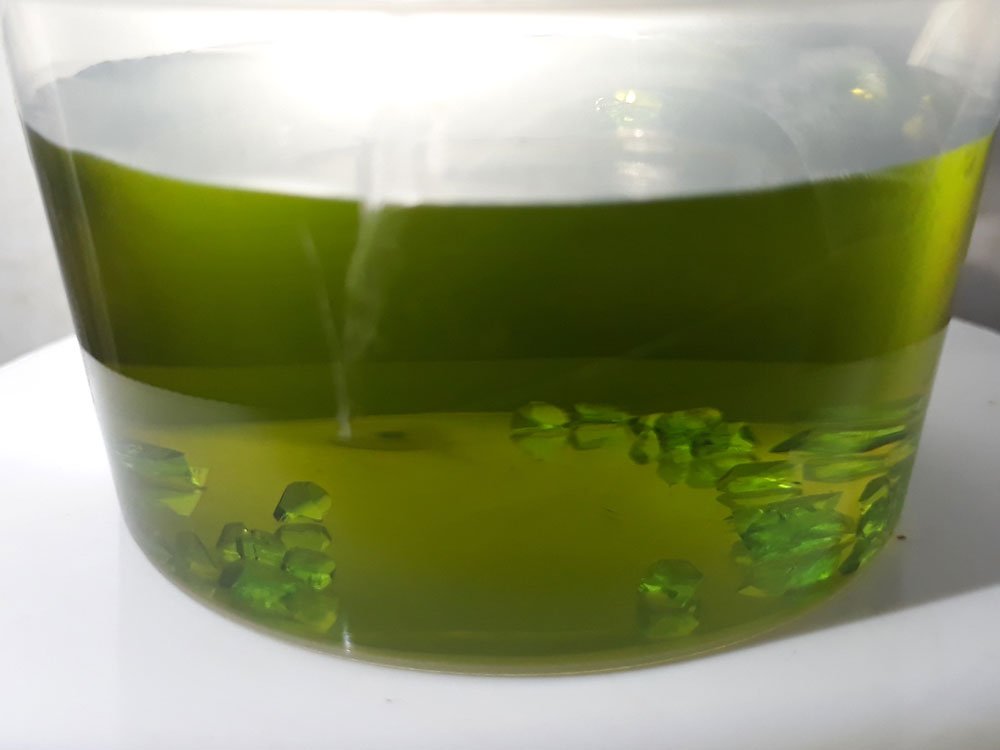 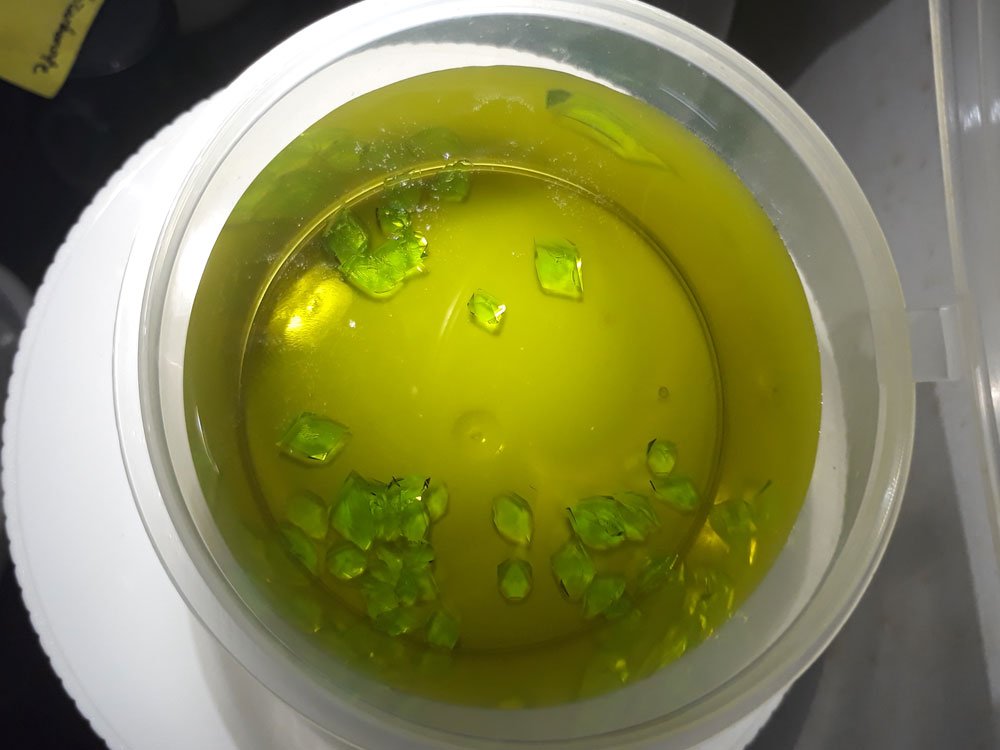 A few days in, the crystals started to clump together. My initial plan was to grow just a few amazing specimens, so I removed most of the crystals, leaving one to continue growing.

I was awestruck when I pulled out these gorgeous specimens! 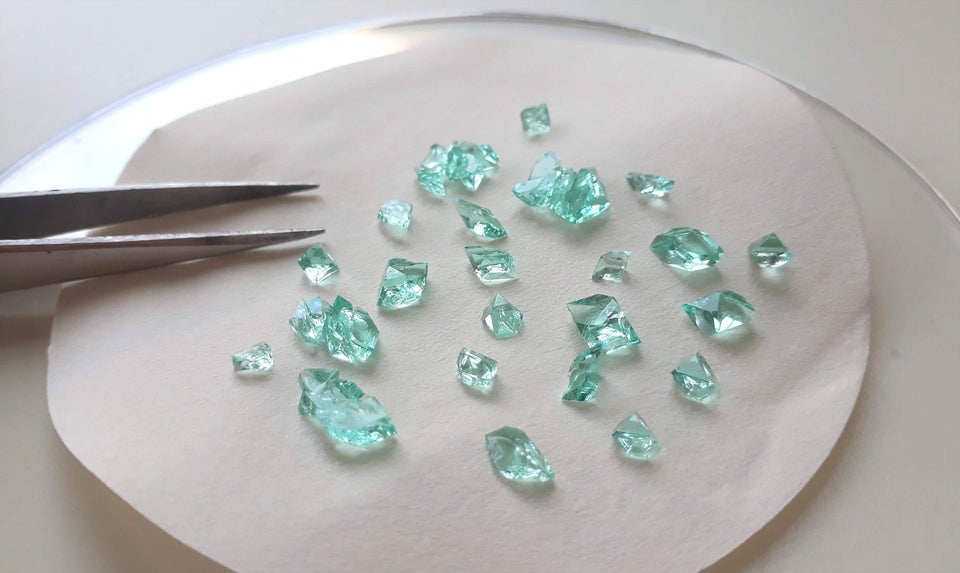 They looked like little bits of glass, and the way they sparkled was something I had never seen before in all my years of crystal growing.

Of course, the most exciting part was yet to come. I wanted even bigger ones. 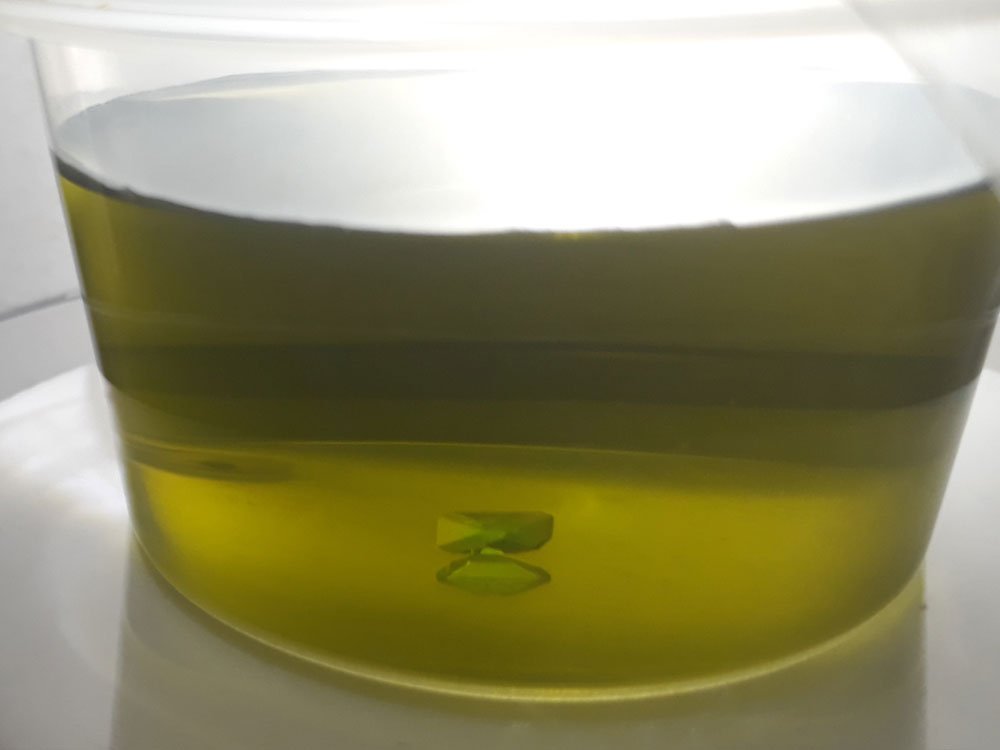 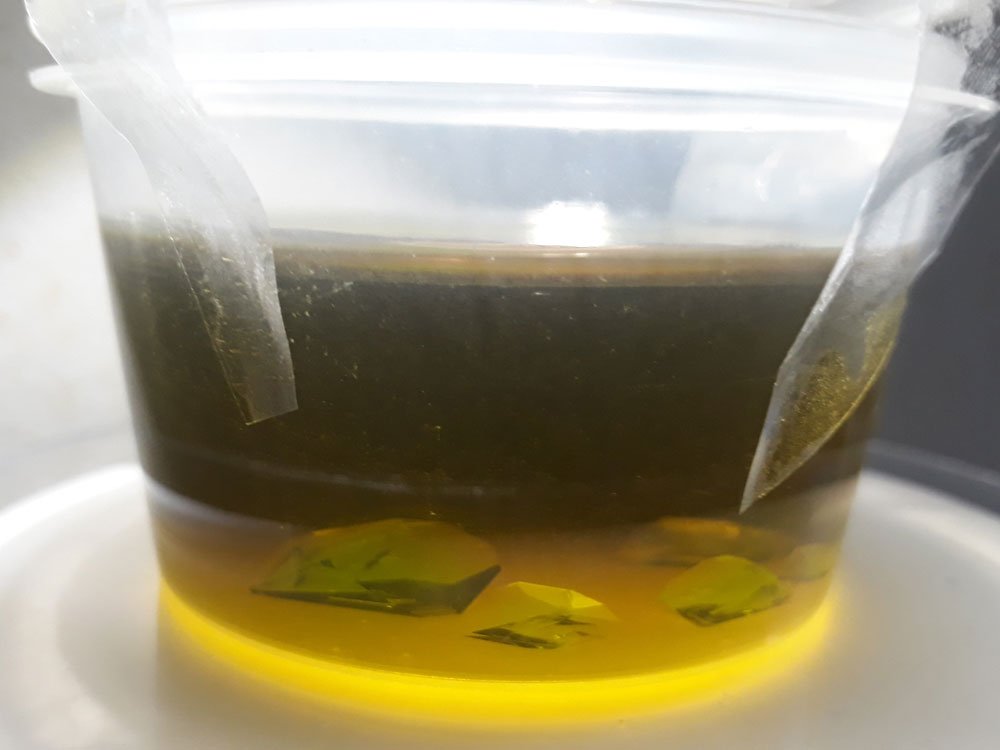 Two and a half weeks after making the green iron sulfate solution, my dreams came true. I fished eleven crystals out of the now brown liquid, and dried them with a piece of filter paper.

And they were absolutely amazing.

They looked like brilliantly cut gems that had been polished to perfection. When I put them under the light, those green crystals gave off a soft bluish glow that’s difficult to describe. One crystal was utterly flawless – its edges as sharp as diamond and as clear as glass.

I’ll let you see them for yourself. 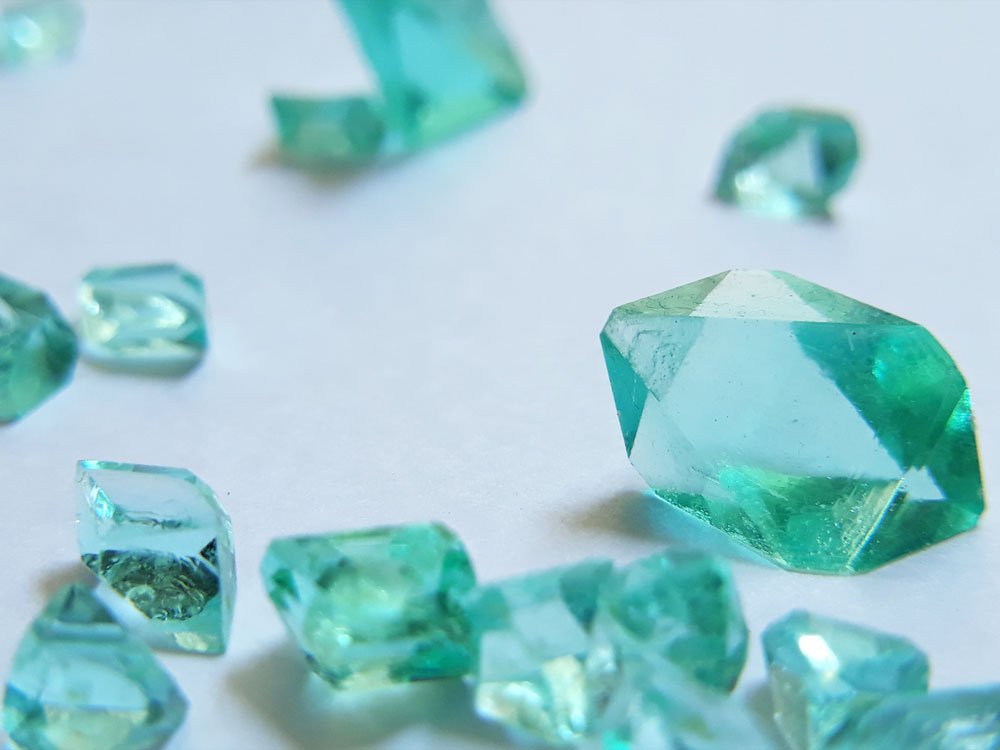 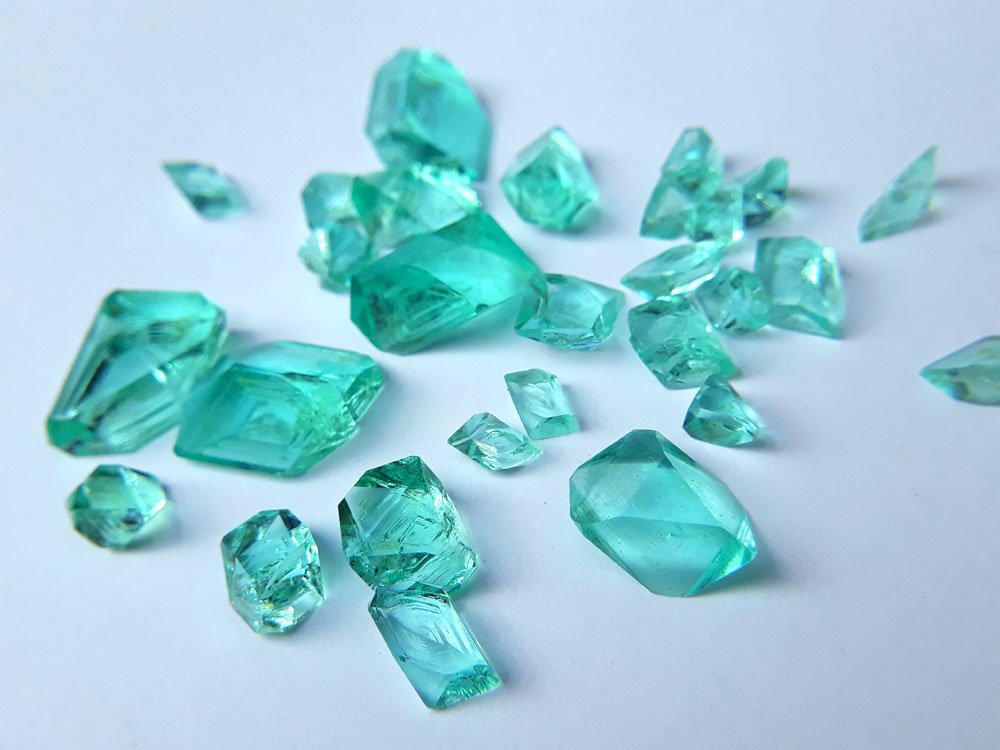 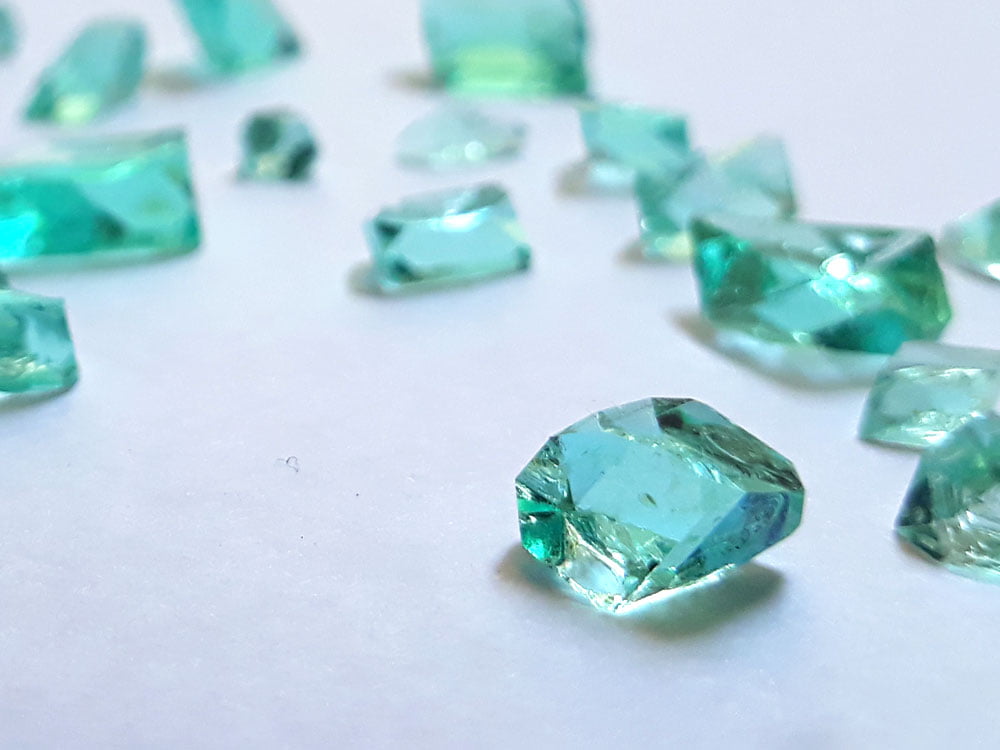 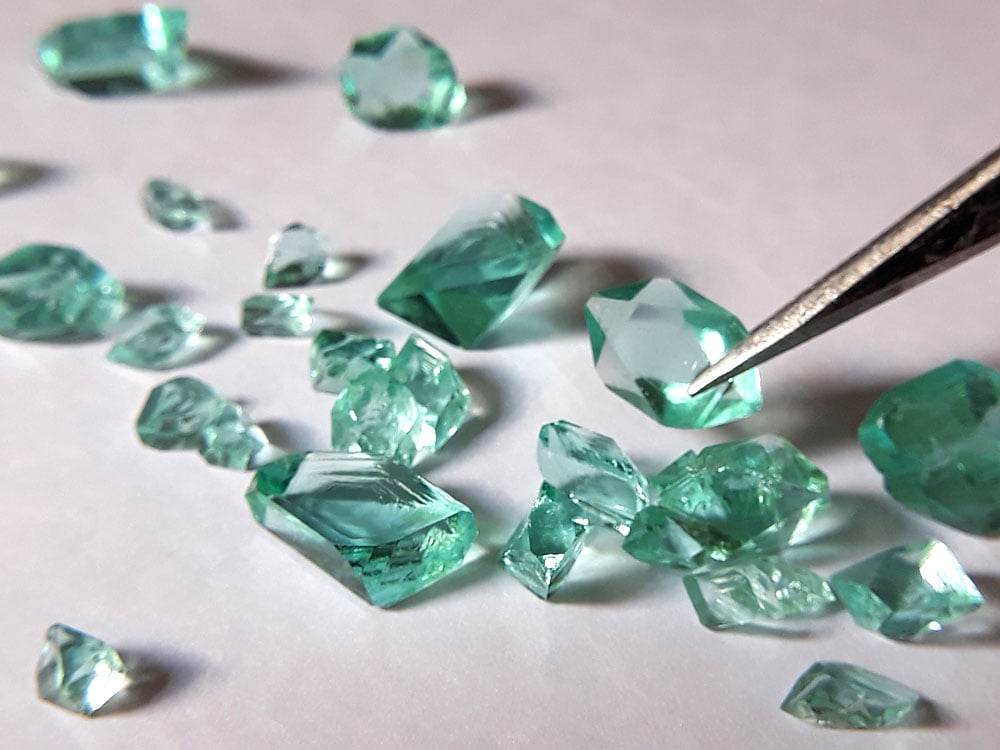 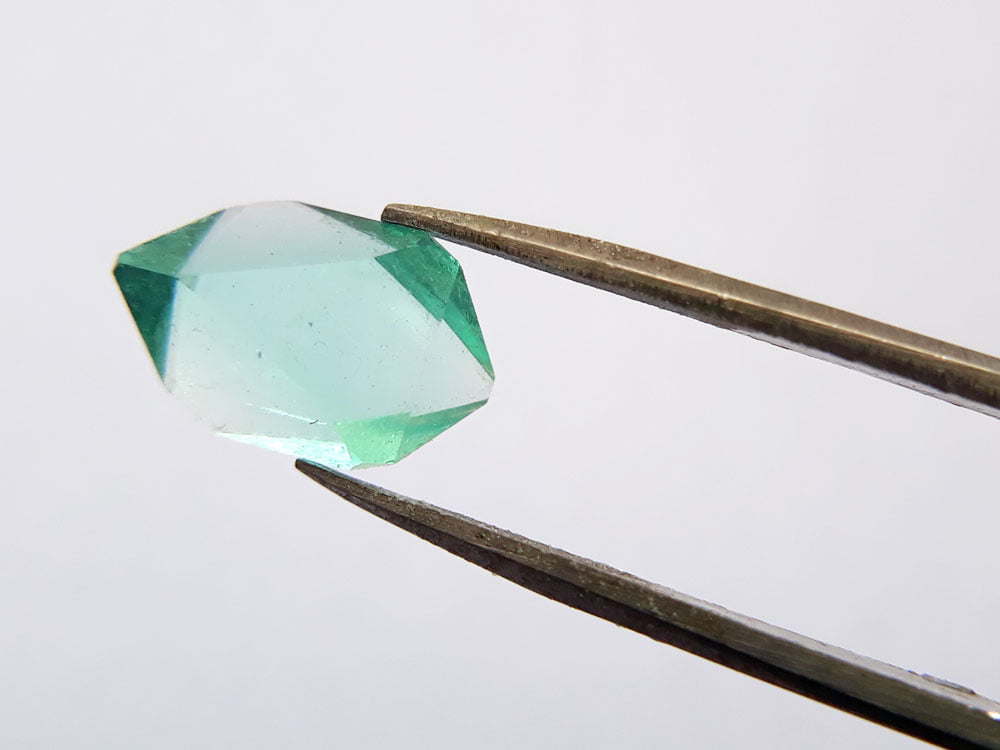 Unfortunately, I couldn’t just put them on display – because of two problems.

First, when exposed to the oxygen in the air, iron (II) sulfate heptahydrate oxidizes to form brown iron (III) sulfate. It loses its sparkling blue-green hue and takes on the color of rust.

Alternatively, if it is placed in a dry environment, the crystal will dehydrate. This means it loses the water trapped inside its crystal structure and turns into white powder.

However, there is hope. I decided to try storing them in an airtight glass bottle, and it worked pretty well. As you can see, the second crystal looks almost brand new, even though it has been kept for a month. 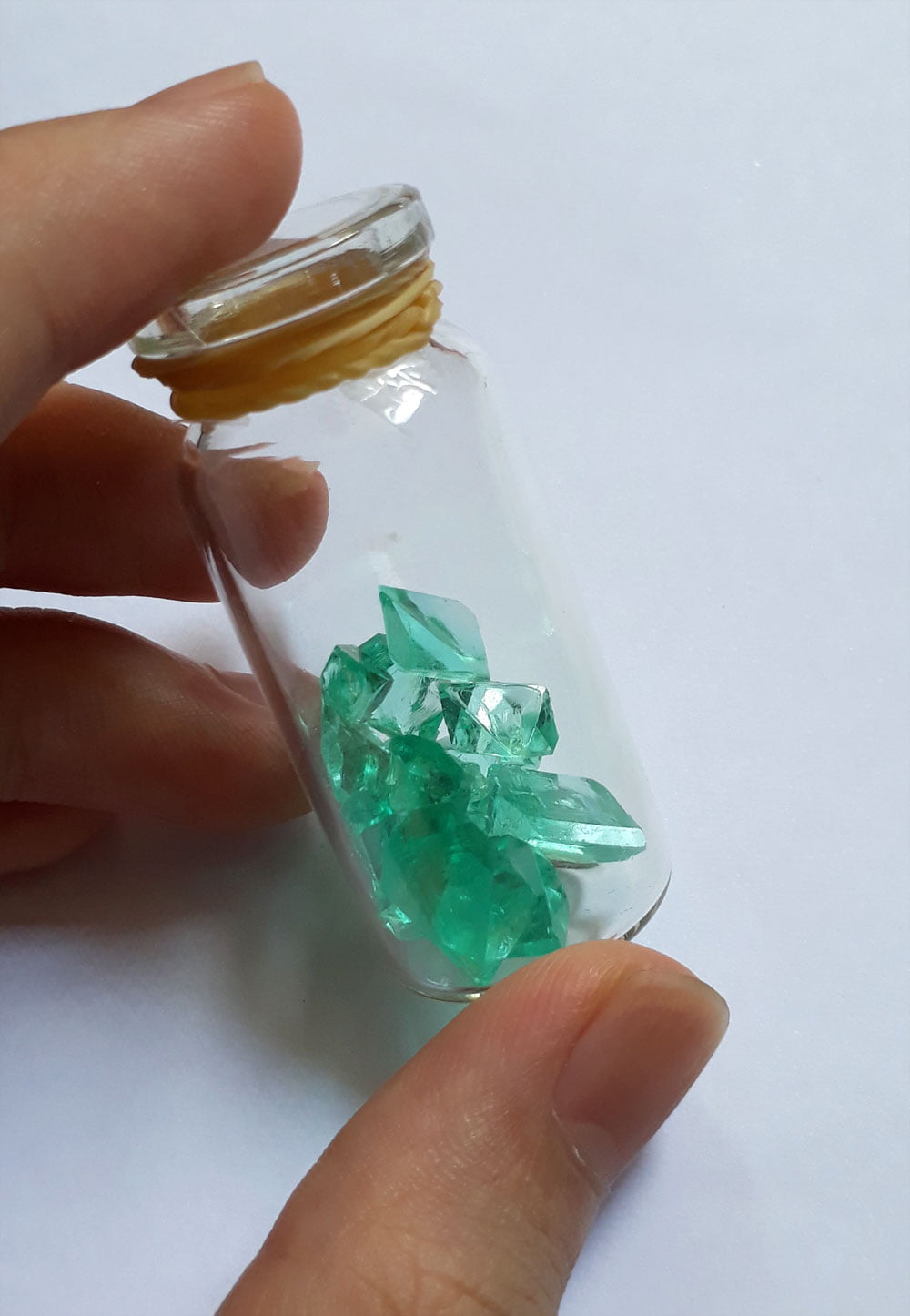 It’s been great fun growing iron sulfate crystals. As I’ve mostly used up the solution, I decided to stop my experiments for now, and move on to a new compound.

It’s a close cousin of this one – double salt ammonium iron (II) sulfate – also known as Mohr’s salt. Plus, it’s much more stable in air. Check out my first attempt here!