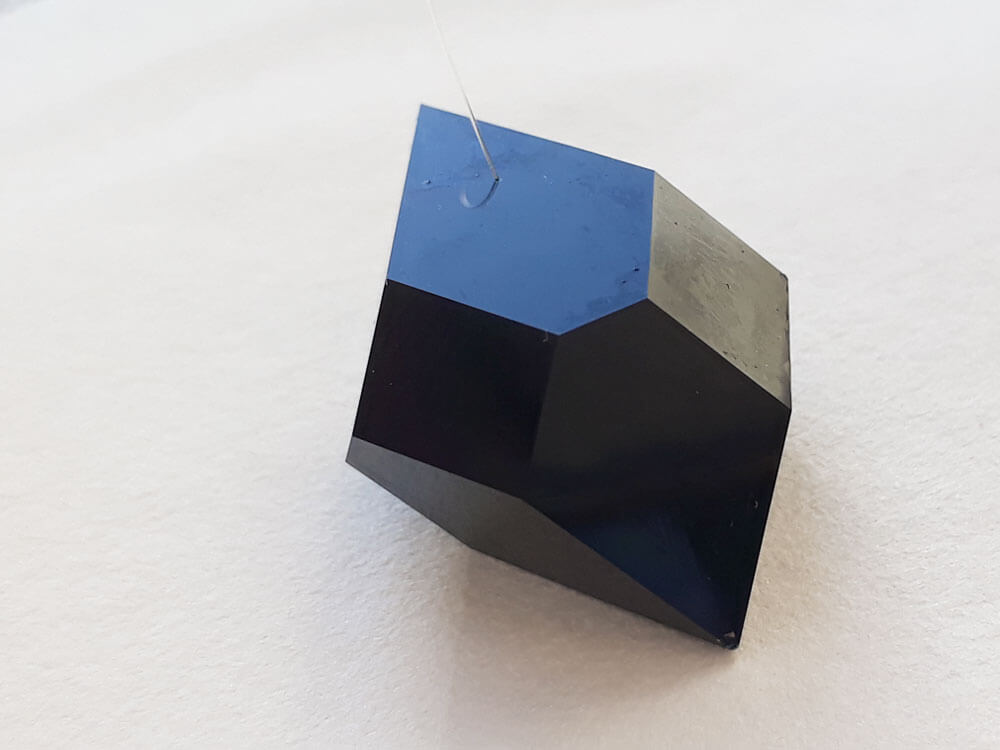 Ever since I started growing crystals, I’ve heard that copper acetate produces crystals like no other compound. They are sleek, shiny, and colored so deeply the crystals seem completely black. Large specimens look like they are made of polished obsidian, and they possess an almost spectral appearance.

Unlike many other unique compounds, this one was actually quite easy for me to obtain. After electric blue copper sulfate, I decided to make this my next crystal growing project. Little did I know it would take me over a year to grow a gem I was truly proud of.

This is a story of that journey.

The easiest way to synthesize copper acetate was by converting the copper sulfate that I already had by a two-step process.

First, I poured a saturated solution of copper sulfate into a solution of baking soda. The moment they mixed, (basic) copper carbonate precipitated out, turning the mixture a cloudy blue. 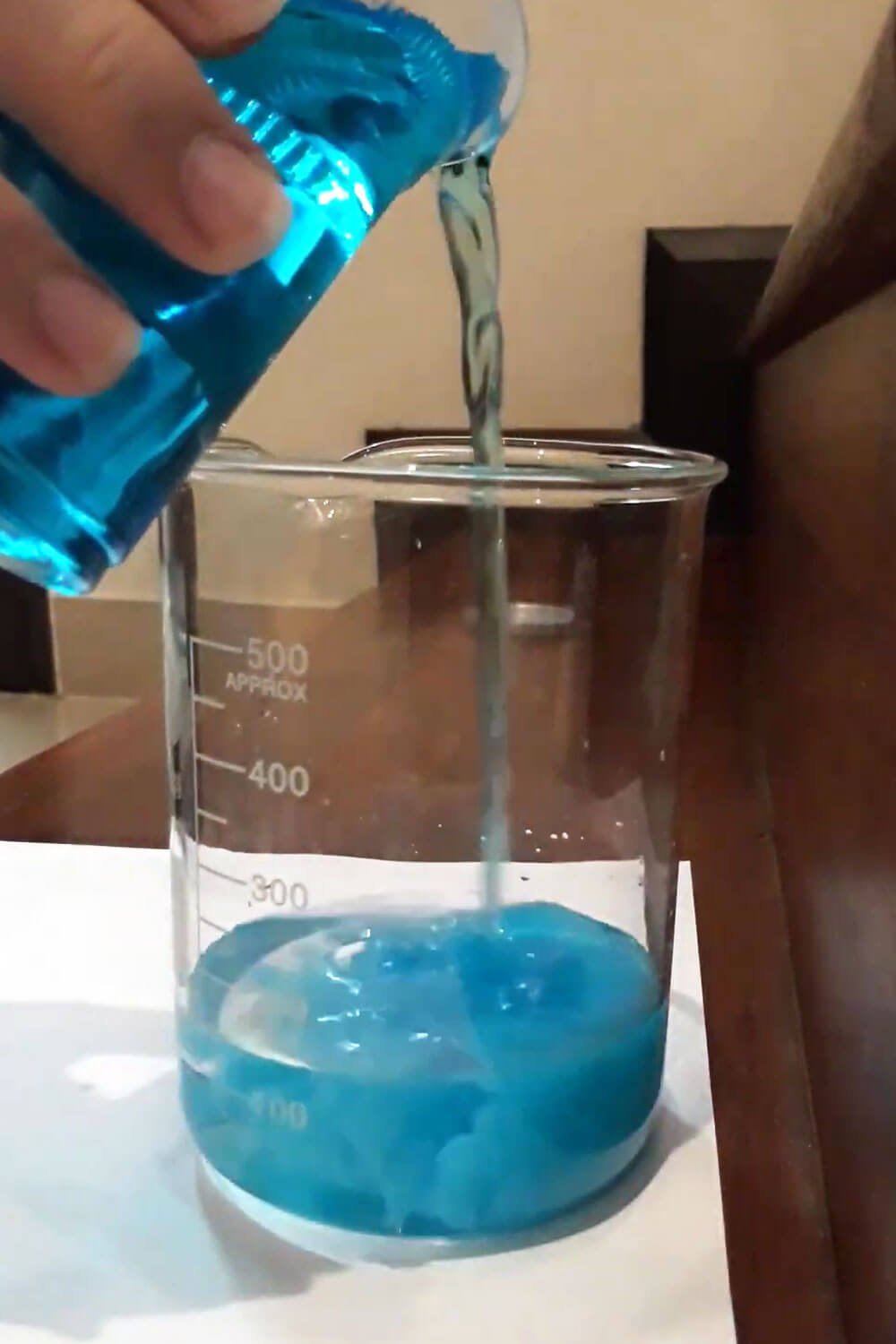 Since copper carbonate is insoluble in water, I easily extracted it with a quick filtration. I rinsed the filtrate a few times with water to get rid of any remaining sodium sulfate, and let it dry.

Then, I was ready to make copper acetate.

I scraped the copper carbonate powder into a large container and poured in about 300 ml of vinegar. After 30 minutes, all the powder had dissolved, and the solution turned Prussian blue.

After that, I filtered the solution once more into a dish, and I was ready to start growing crystals.

To start off, I did a trial run by evaporating 20 ml of solution in a similar dish. 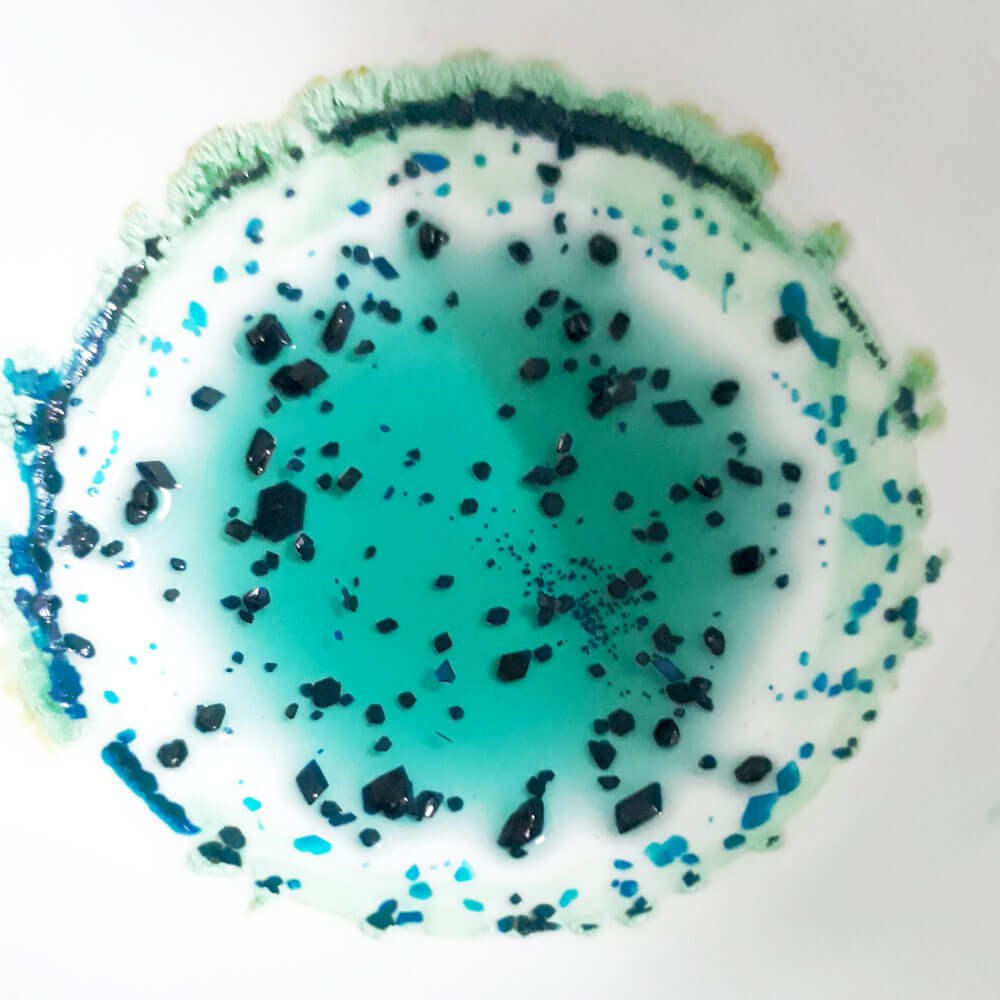 The results looked promising, so I proceeded to the main batch immediately.

After a week, I was delighted to see that a beautiful single crystal had formed right in the middle of the dish. It slowly got bigger, and as it grew, so did my confidence. 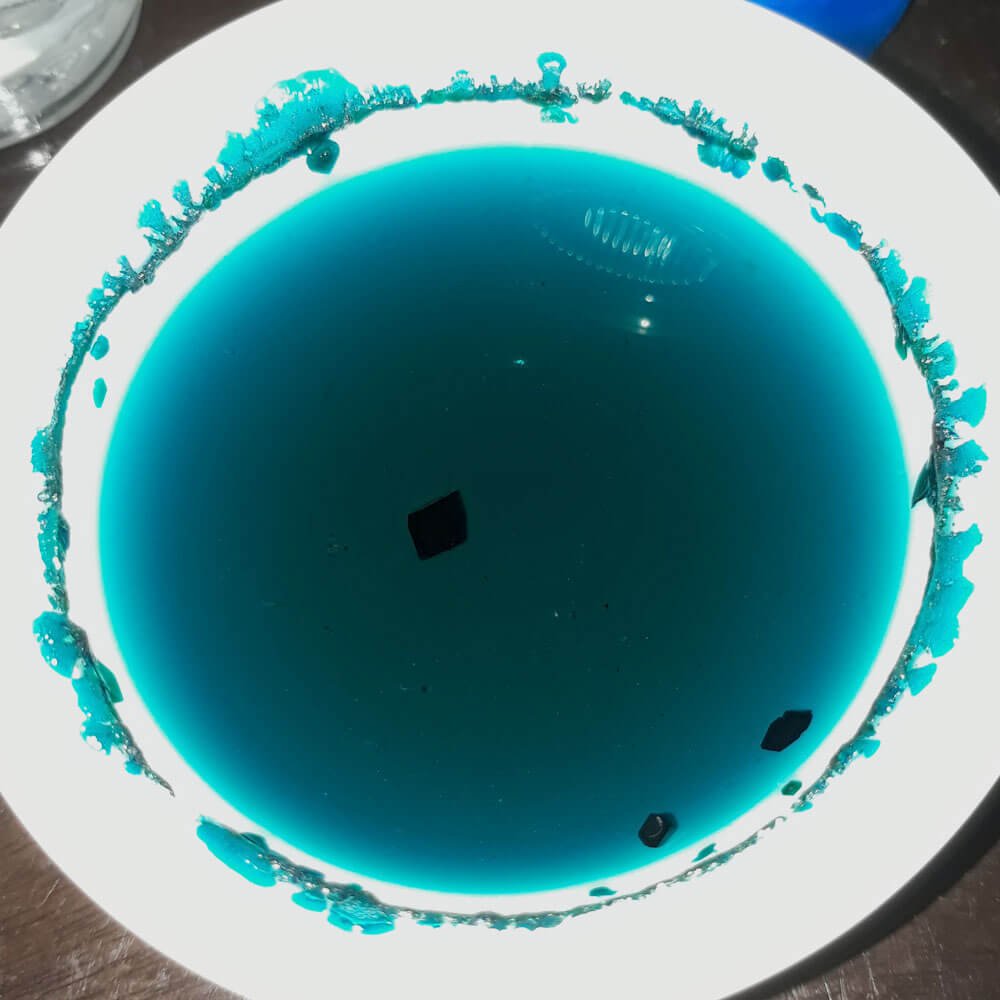 Unfortunately, blue-green crust also formed on the sides of the container (as pictured). As the level of the solution decreased, they started drying out, flaking, and falling to the bottom. These tiny splinters acted as nucleation points, and a whole bunch of tiny crystals began growing, as well as sticking to my main crystal.

I tried moving it away, but it was already too late.

And so the first run ended in failure.

So did my next few attempts.

It turns out what happened the first time was not because of an unlucky accident, but because of impurities in the solution. It is likely because the copper sulfate I used was impure to start with.

According to the Crystal Growing Wiki, iron salts in the solution lead to outgrowths on the main crystal and the container wall, also changing the solution dark green. This explanation exactly fit my situation.

Another problem I encountered was that after some time, my solution would also turn a milky white. This is because of the decomposition of copper acetate into copper carbonates and hydroxides. Although many sources say that adding more vinegar will fix things, I found it unhelpful. 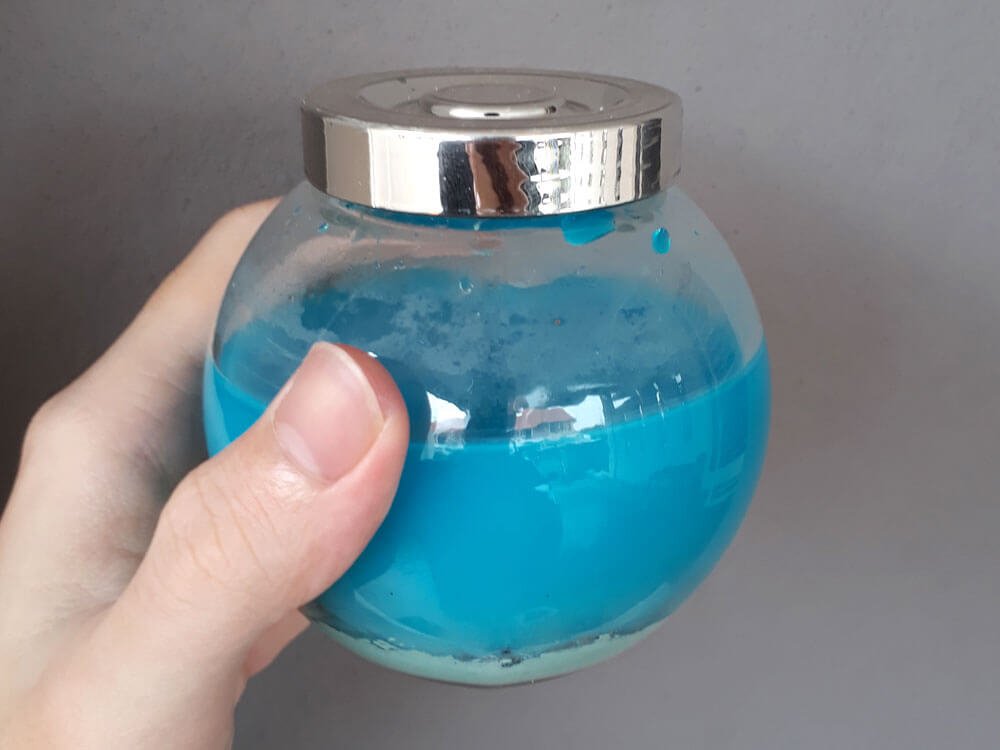 This is what a cloudy suspension of copper acetate + carbonate + hydroxide looks like.

If I wanted to grow good crystals, I had to find a way to make purer copper acetate.

A solution in sight

Luckily, my uncle came to the rescue. He gave me some scrap copper from his own projects, and I cut them up into small pieces. Next, I reacted 10g of this metallic copper directly with 1 liter of white vinegar, eliminating the chance of any impurities.

Because copper is an unreactive metal, it does not react directly with the vinegar. Instead, the acid attacks the oxide coating and turns it into copper acetate. Meanwhile, the oxygen in the air slowly re-oxidizes the metal. 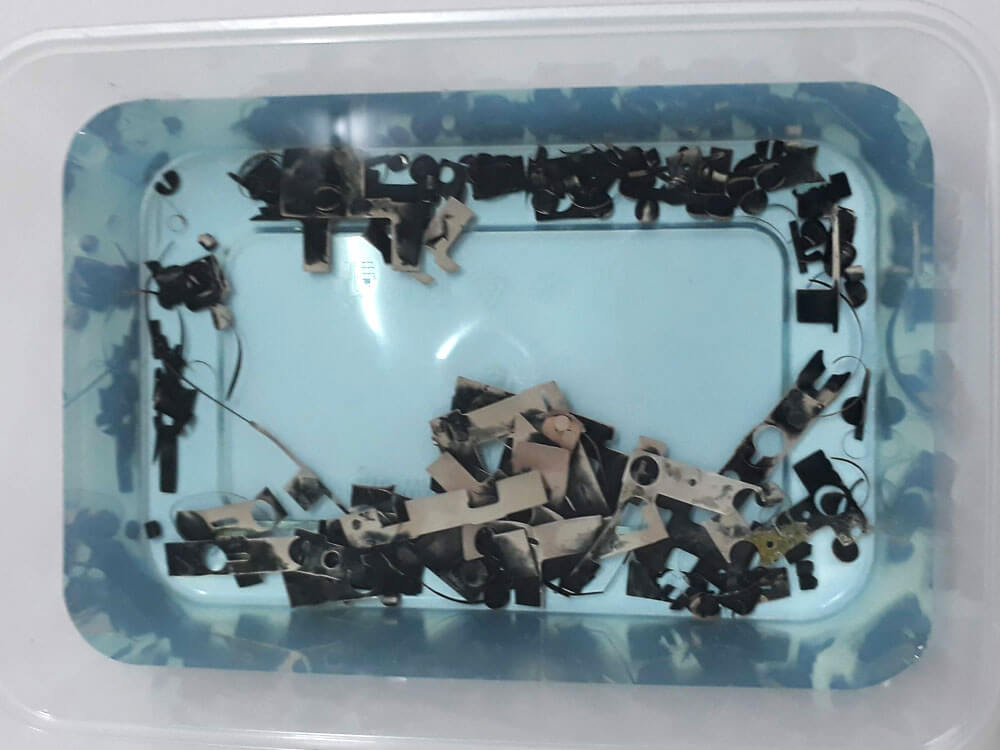 This reaction was slow, but not unreasonable. Two days in, the solution was a pale blue. It slowly darkened over the course of a week, until the thing looked reasonably concentrated.

I filtered off the solution and was greeted with a pleasant ocean blue. 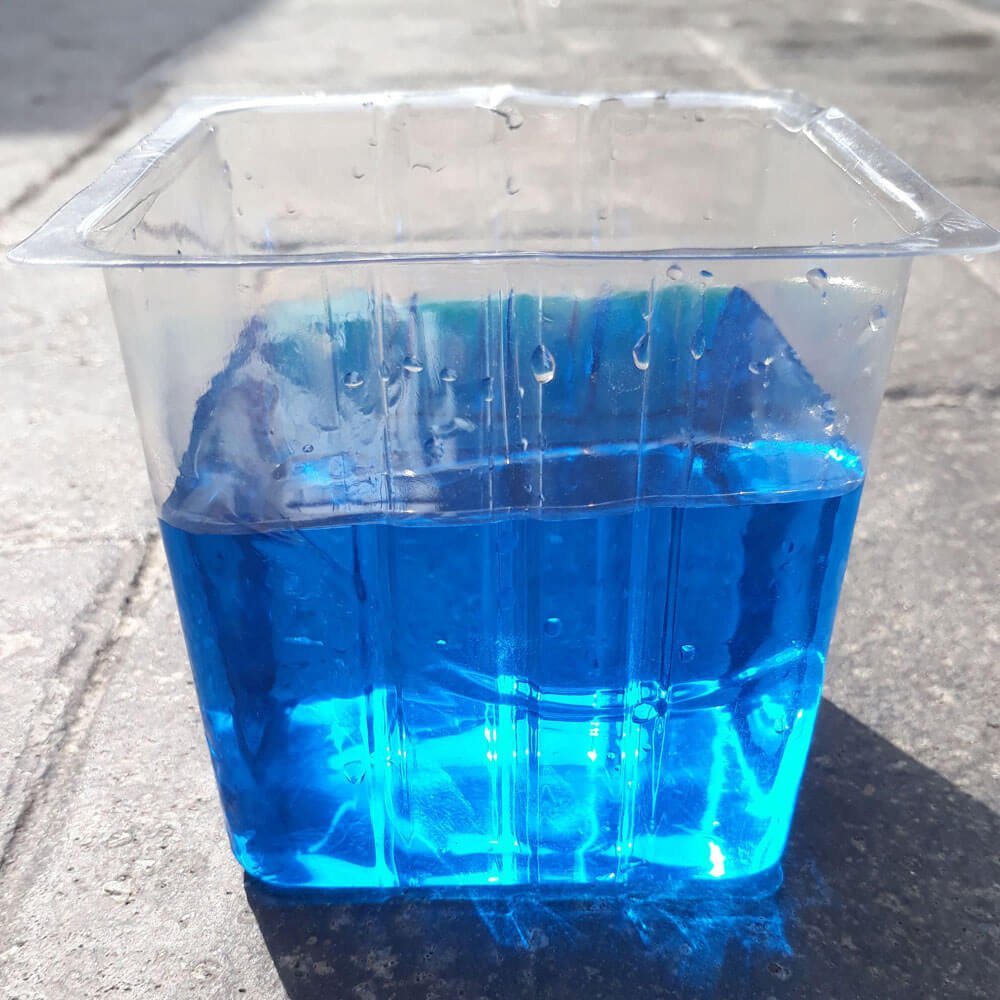 It looked much purer than my previous solutions. All I had to do now was to let it slowly evaporate.

I put it in the storeroom and checked on it daily. After a frustratingly long wait of 3 weeks (perhaps I stopped the reaction too soon), small, dark crystals began growing at the bottom. 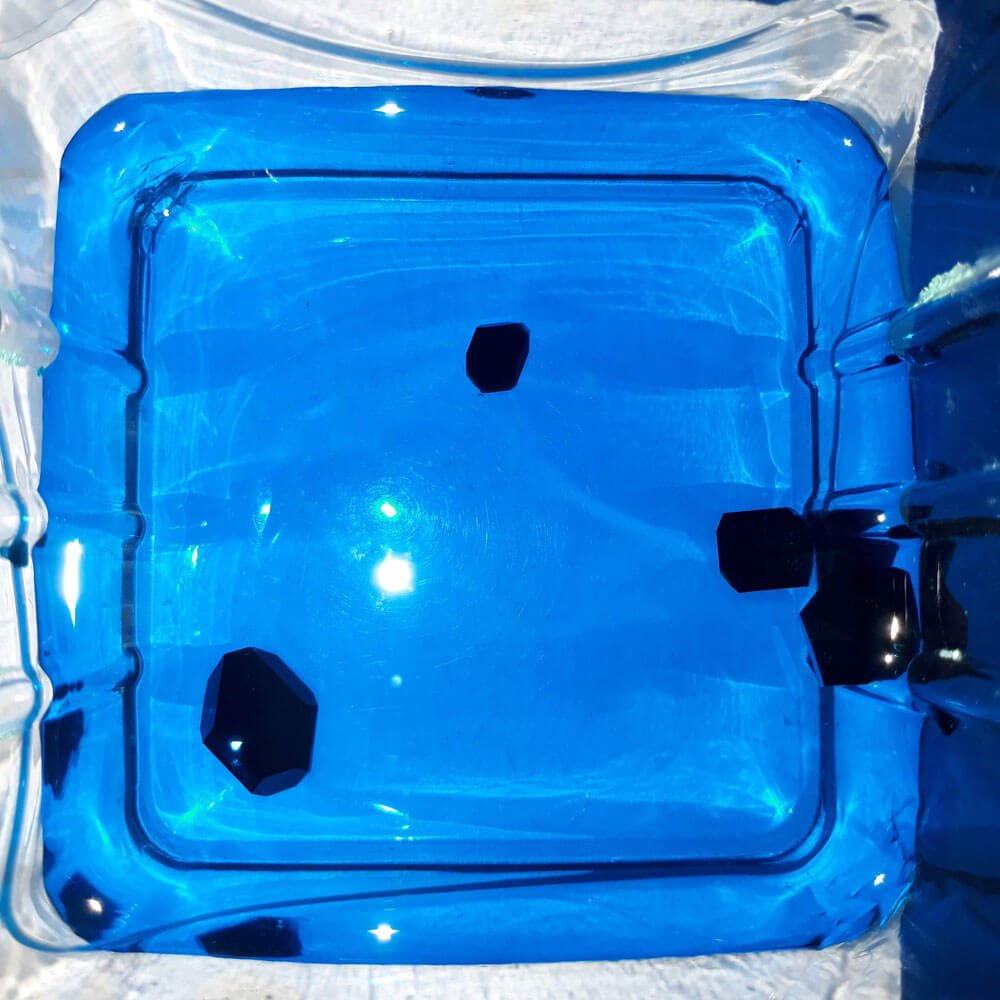 I kept my fingers crossed – this was no cause for celebration yet.

But my worries were unfounded. As the weeks passed, the crystals grew – but no crust formed on the edges of the container. And there was no sign of cloudiness. I checked on them daily, and every day I saw the shiny black crystals a little bigger than before, sitting happily in their clear bath. 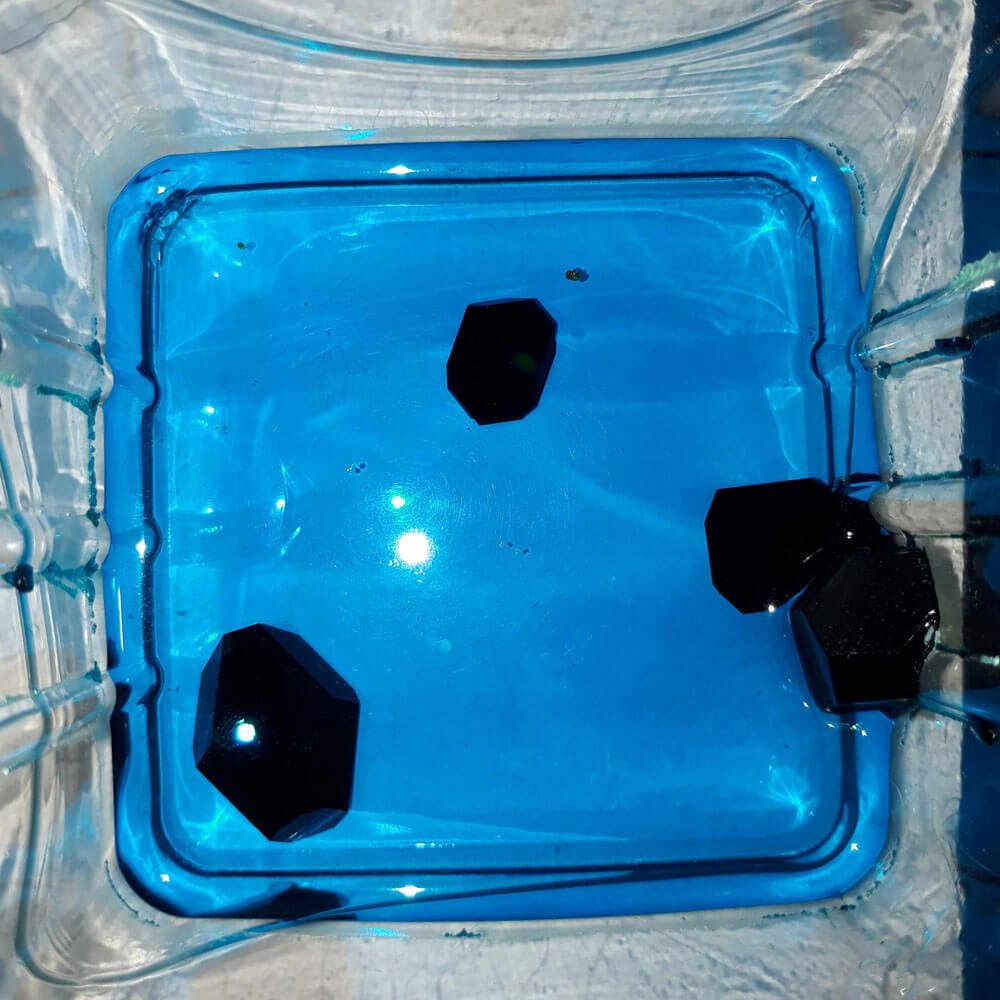 After 2 months, only 20% of the solution was left, and I decided it was time to remove them. Pouring it away, I plucked four large, single crystals out of the container.

They were not perfect; three had cracks crisscrossing over their otherwise smooth edges. Two were also stunted as they grew on the side of the container. Even so, they were still very pretty, and far better than my first attempt. 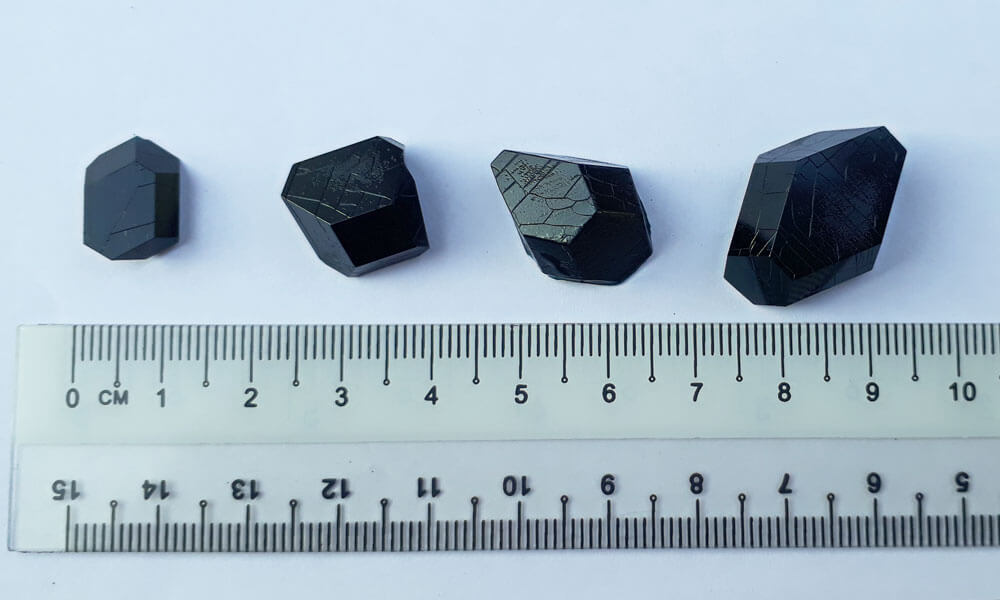 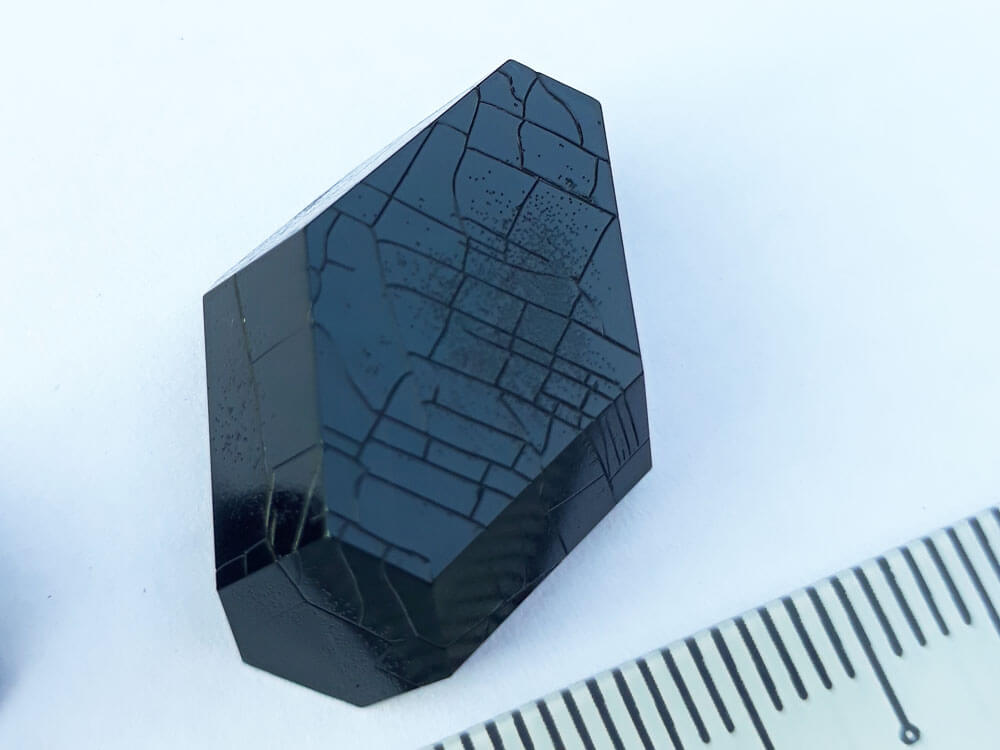 I stored the four crystals in an airtight container. To it, I also added some smaller crystals I had grown simultaneously in a separate dish. And there they sat for 11 months, until I felt the time was ripe for one more attempt.

It would be my best one yet.

11 months had passed, during which I grew many other crystals. And boy, it was a lot of fun. Fresh from growing copper metal crystals using electrolysis, I thought I’d have another go at copper acetate.

This time, I decided to suspend the seed crystal in solution. This way, I would be able to see the true monoclinic shape of copper acetate monohydrate. Plus, the faces would be much more even.

I prepared a fresh batch of solution using the same old method. Then, I picked a large seed crystal which I had stored a year ago, and tied it to a nylon string. Then, I poured 250 ml of saturated solution to a cup and lowered the crystal inside until it was suspended in the middle.

To slow down evaporation (direct exposure to air probably made my old crystals grow too fast, hence the cracks), I partially covered the cup with a piece of filter paper. 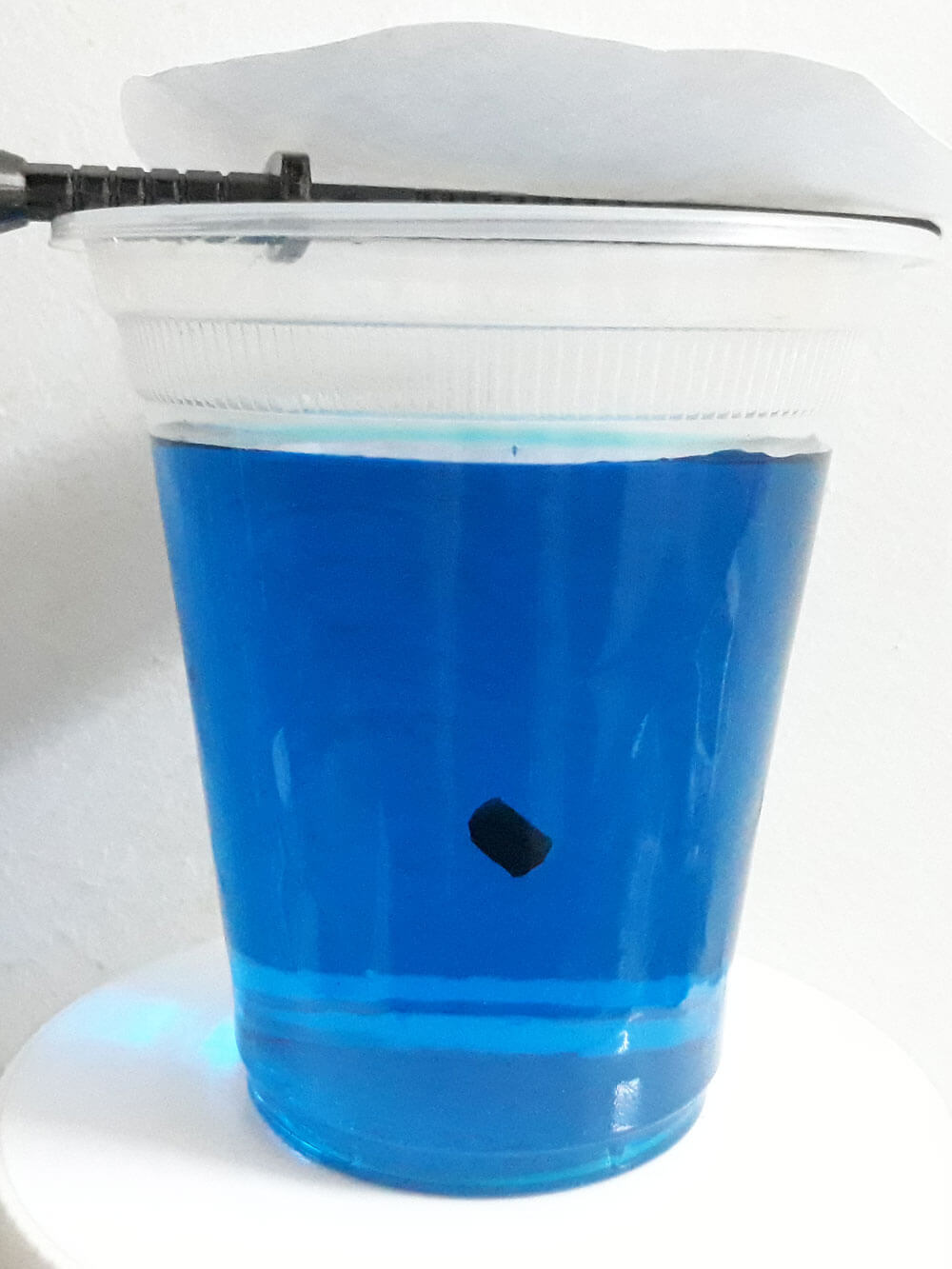 To my surprise, this method worked extremely well.

Small imperfections on the surface of the crystal smoothed over within days. And although the knot cut into the crystal, the jagged edges it created had also disappeared by the third week.

At one point, a tiny stray crystal attached itself to the string, and I had to dip the entire crystal into water for half a minute to melt it away. Naturally, the surface of my main crystal became rough. But a few more days of growing and it was looking flawless once more.

I also noticed that temperature fluctuations would damage the surface slightly. To check, I shone a torchlight at the crystal until the light reflected directly off its surface. Whenever the weather was particularly rainy, tiny lines would mar its otherwise perfect surface. When the temperature stabilized, these lines vanished.

But overall, things went very well. All I had to do was to occasionally scoop away tiny crystals that formed on the surface of the solution using a plastic spoon. 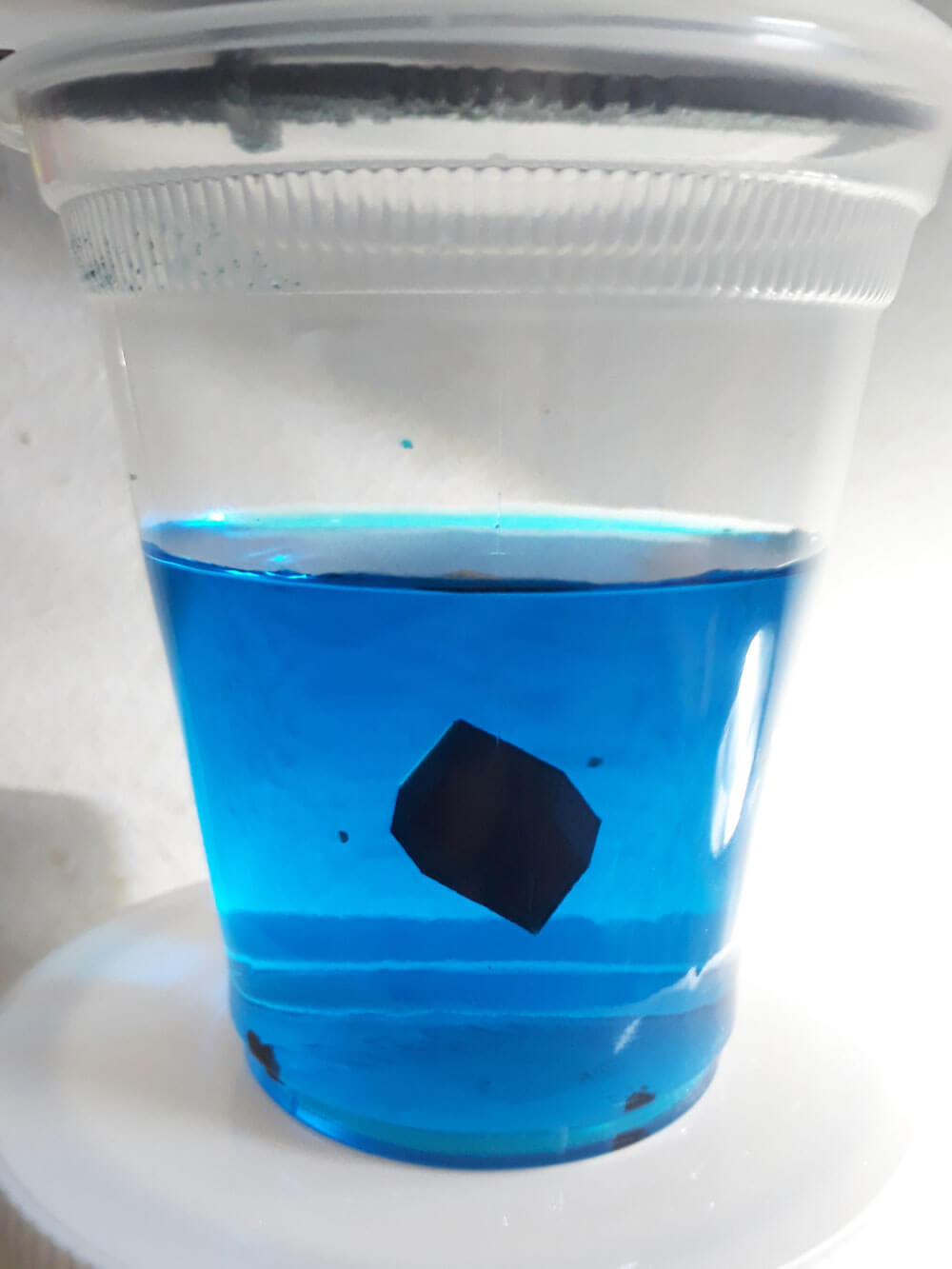 As time went by, the shape of the crystal became more and more well defined. It became very tempting to take it out and check how beautiful it actually was. After 2 months, I could no longer resist the temptation and declared it done.

I don’t need to describe how incredible the specimen was, because a picture is worth a thousand words. 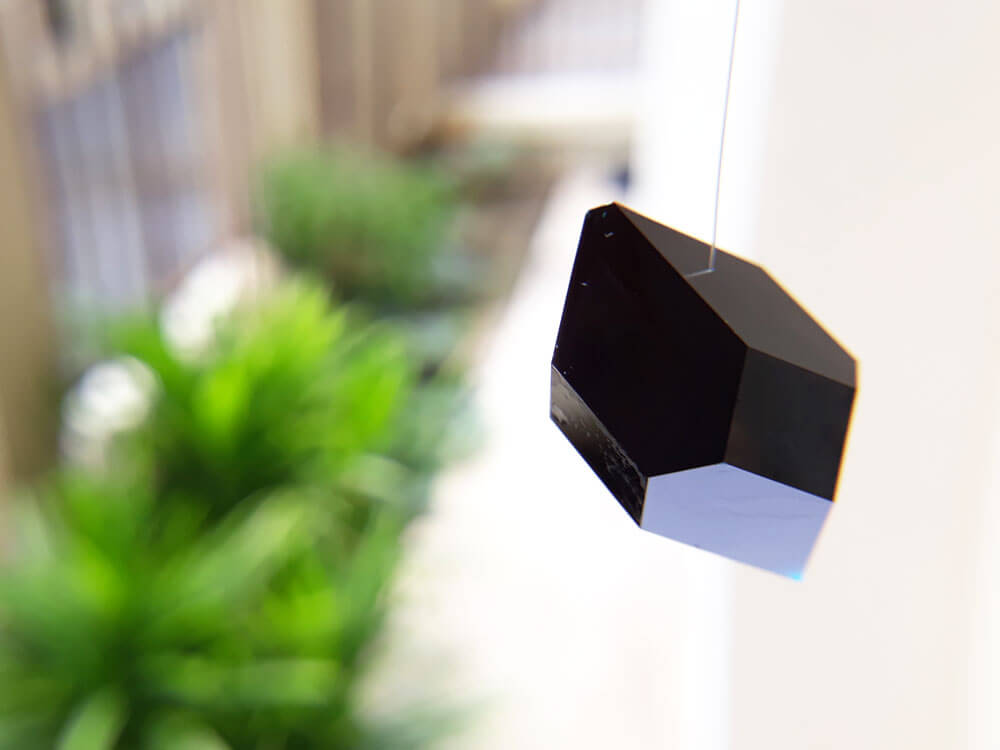 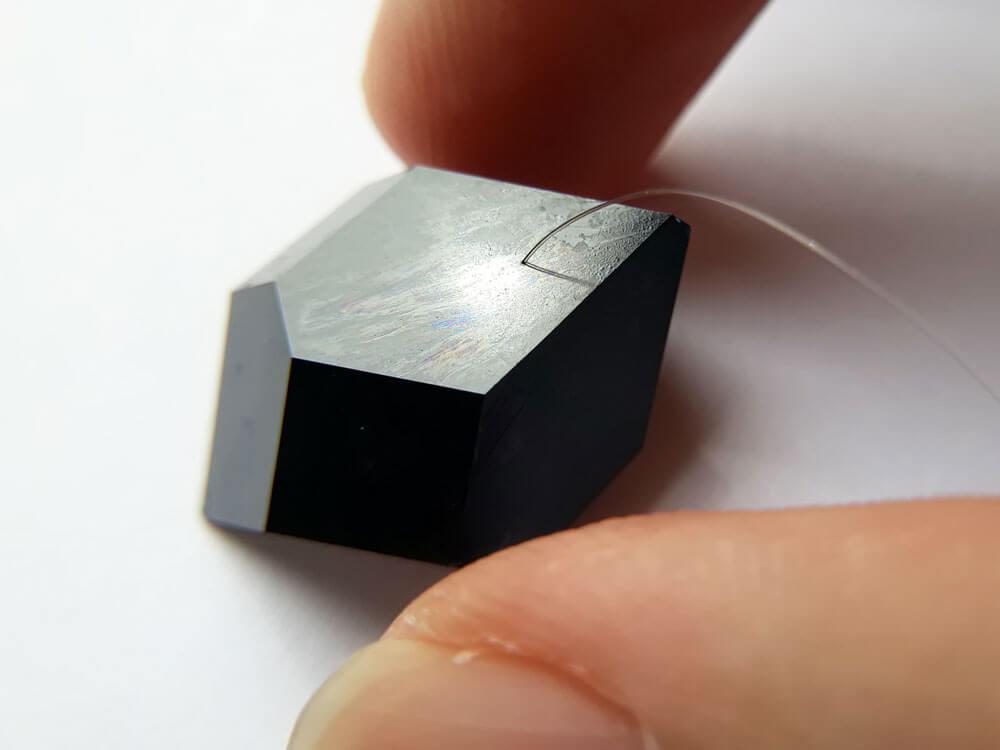 Copper acetate monohydrate crystals need to be stored well, because they dehydrate slowly in air. After a year, faint, blue-green patches had formed on my old crystals – even though they were kept tightly sealed. 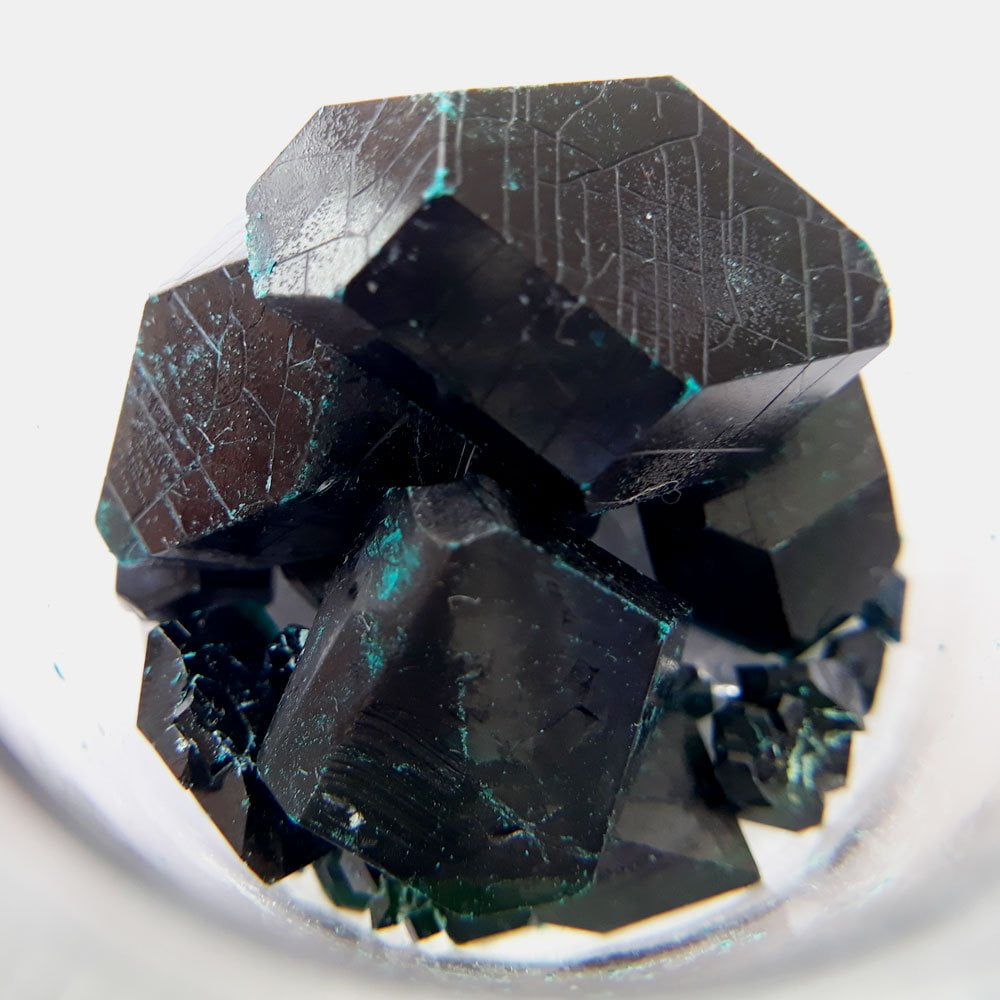 To protect my new crystal, I had to give it another layer of protection. First, I put it in a makeup jar.

Then, I put the makeup jar into another airtight container. To that container, I also added a few grams of copper acetate powder and unwanted crystals. These crystals would hopefully “sacrifice” themselves to keep the condition inside the jar stable, hence preserving my real treasure. 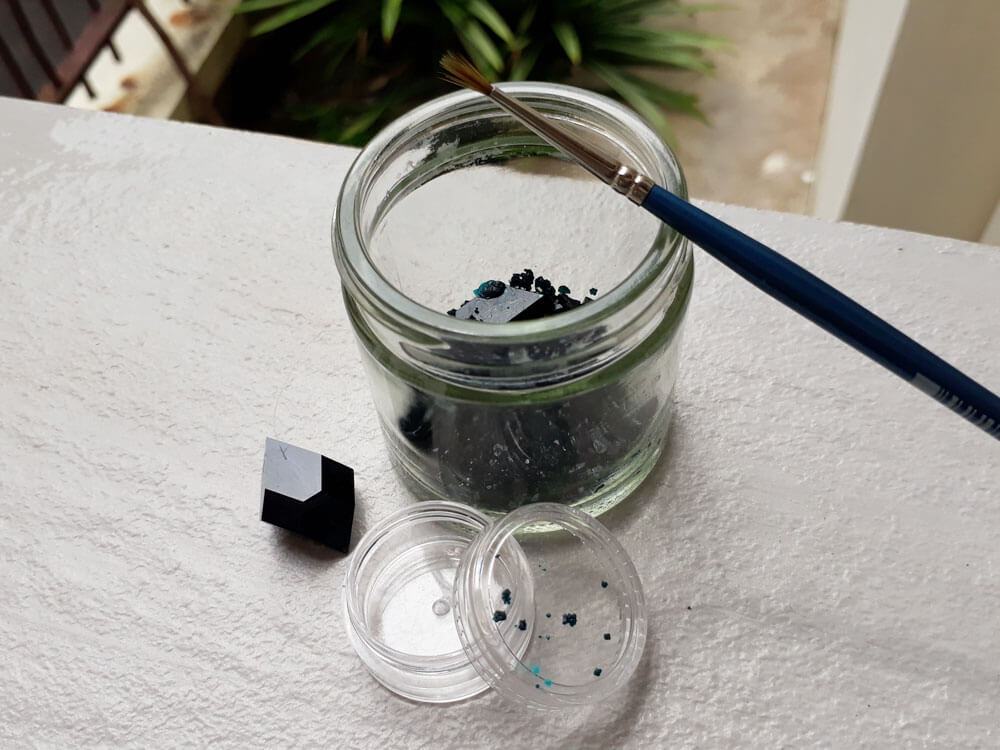 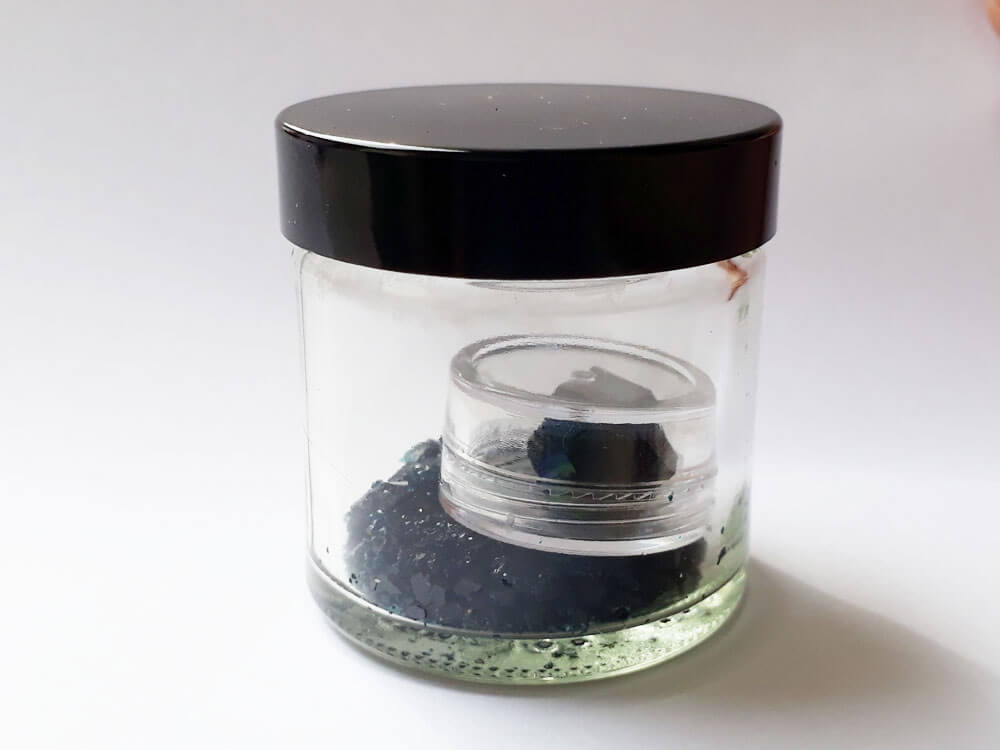 I can gladly say that after 3 months, it still looks as good as new.

And that makes me very happy indeed.

Enjoyed the read? Have any questions?

Wow! I grew these stunning yellow #crystals from a

Here's a crystal of Mohr's salt I grew a few month

Some stunning copper metal crystals I grew with el