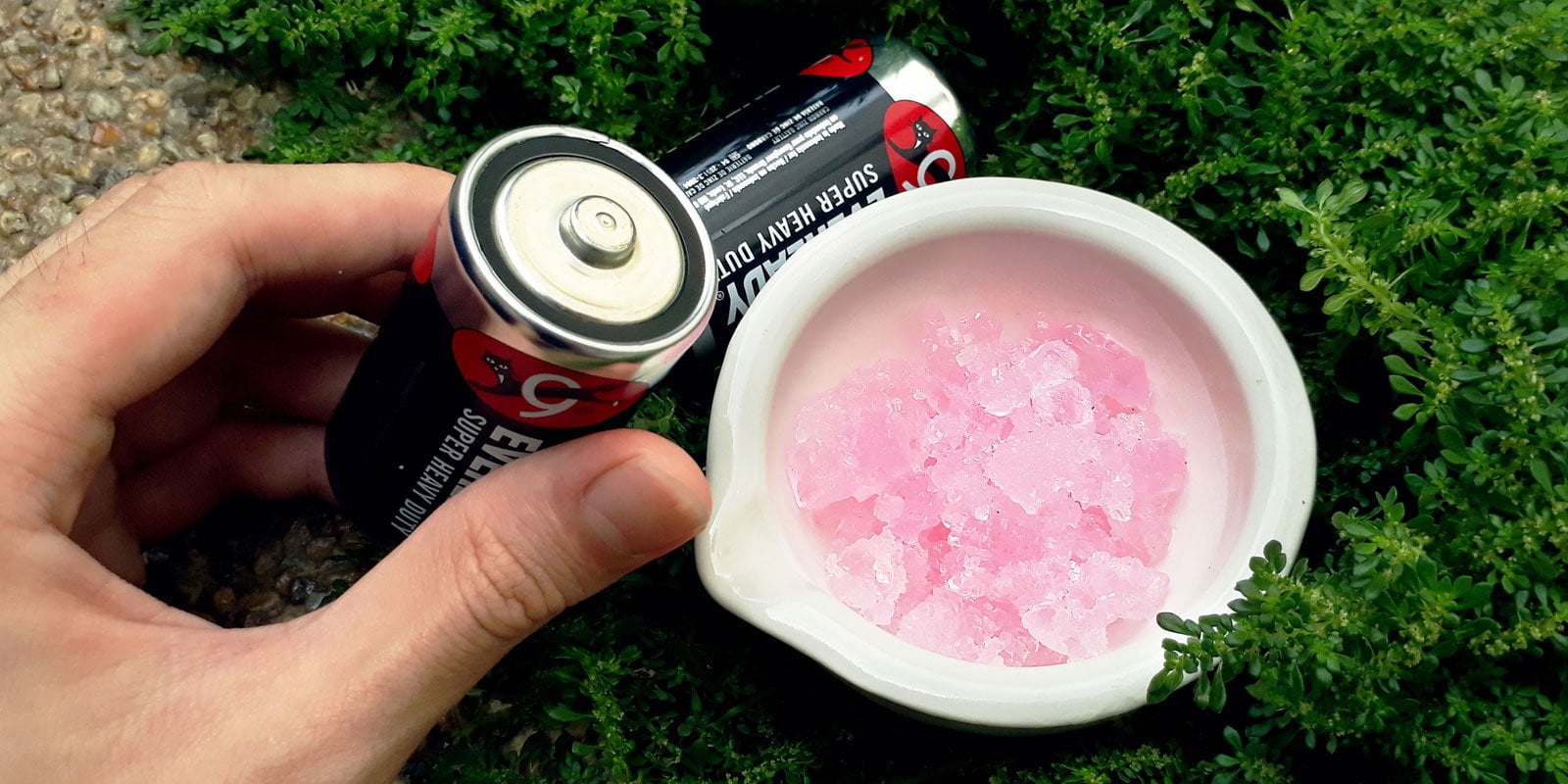 Some batteries contain a paste that can be converted into manganese sulfate, which forms pink crystals. The compound can also be bought online as fertilizer, as manganese is considered a micronutrient that is essential for plant growth.

However, I decided it would be more fun to make it from old batteries. Plus, it would be cheaper.

Of course, not all batteries would work: the ones I needed were carbon zinc batteries, because they used a black paste known as manganese dioxide as the electrolyte.

The black manganese dioxide, in turn, could be converted into pink manganese sulfate by reacting it with oxalic acid (used for cleaning), and then sulfuric acid (battery acid).

Fortunately, my flashlight had just run of juice, and I had two heavy duty carbon zinc batteries.

First, I had to open the battery to extract the paste. To do this, I peeled away its outer casing using a pair of pliers. Then, I popped the metal lid open, exposing the carbon electrode, which I pulled out. Left inside was a sticky black paste —  the manganese dioxide. Using a metal spoon, I scraped it all out into a large beaker. 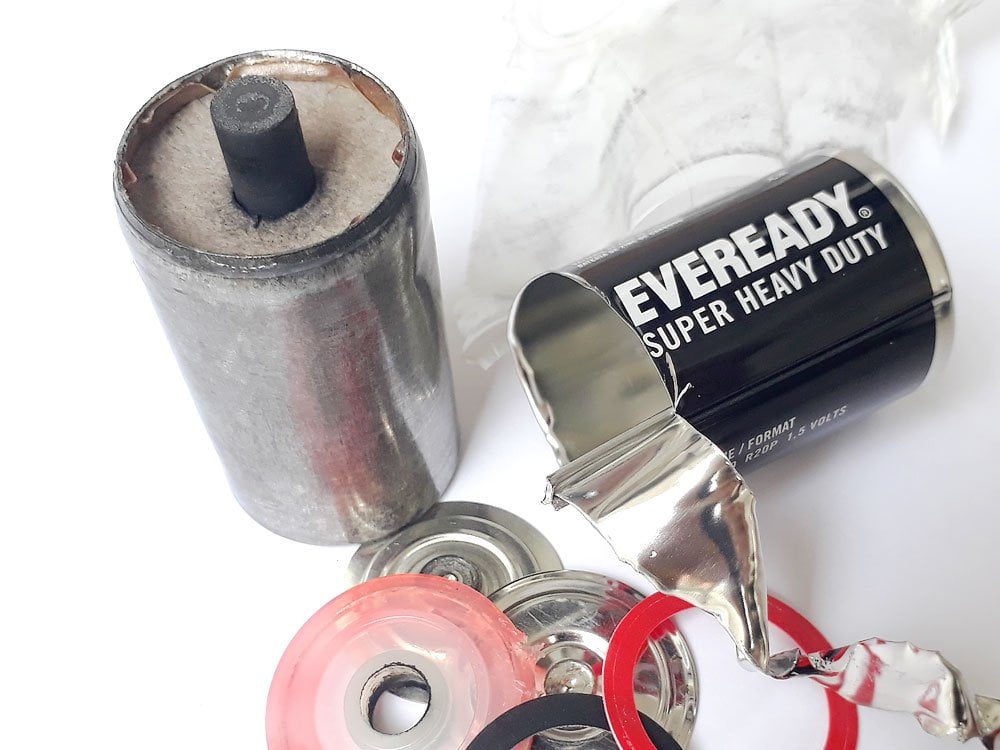 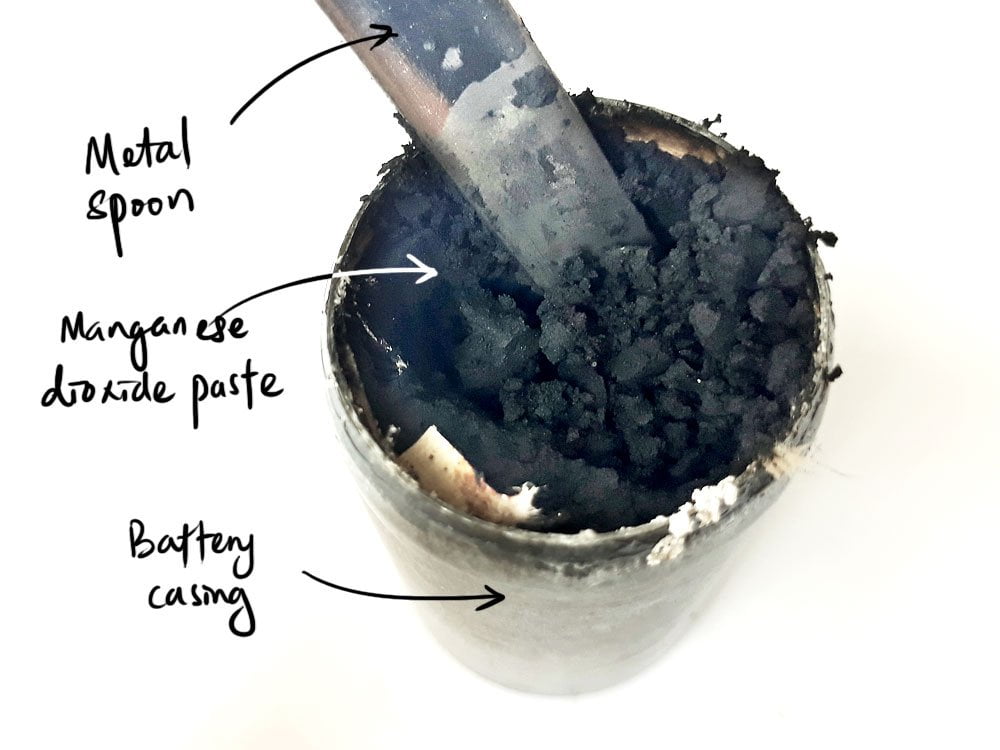 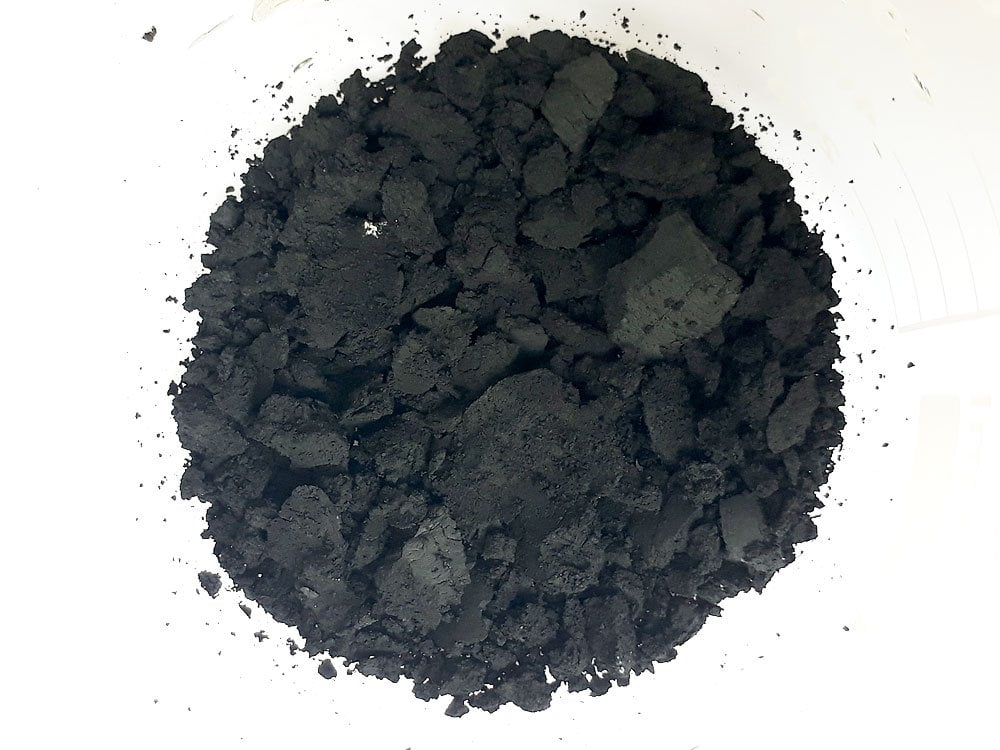 After that, I had to clean the manganese dioxide, because the battery also contained some other chemicals like ammonium chloride.

So, I filled the beaker up to the brim with water, stirred it around, and let the particles settle. Following that, I decanted the water away. Because ammonium chloride can dissolve in water, most of it should have been washed away, leaving the insoluble manganese dioxide behind.

To another beaker, I added 200 ml of water, 30 grams of oxalic acid and 60 ml of battery acid (~20% sulfuric acid), and heated the solution using a hot plate. 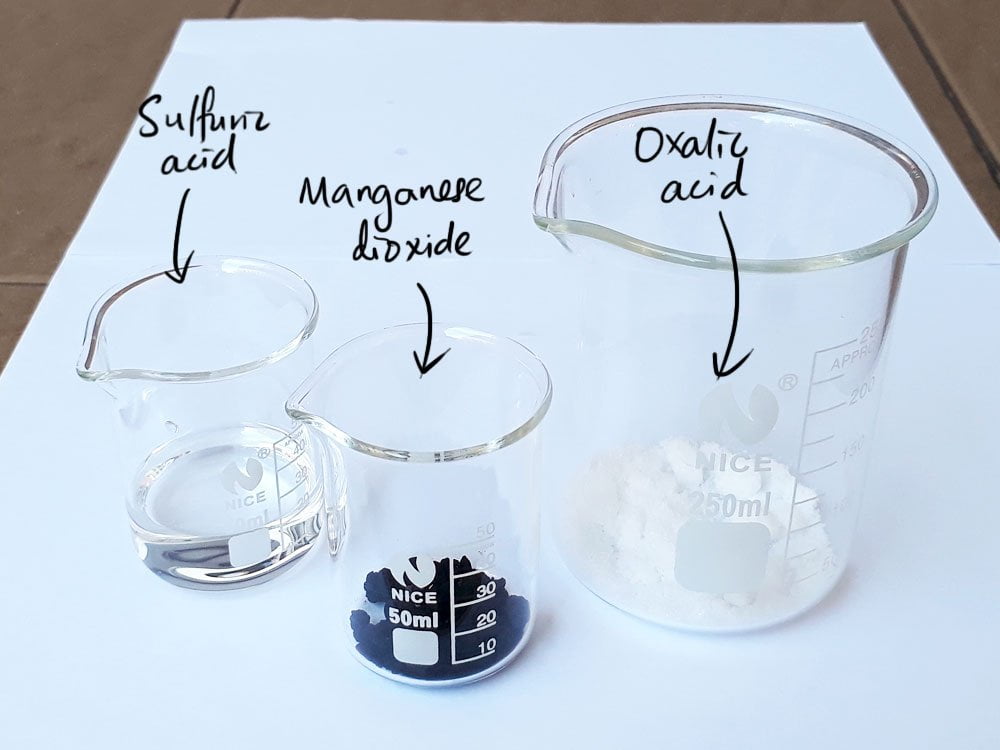 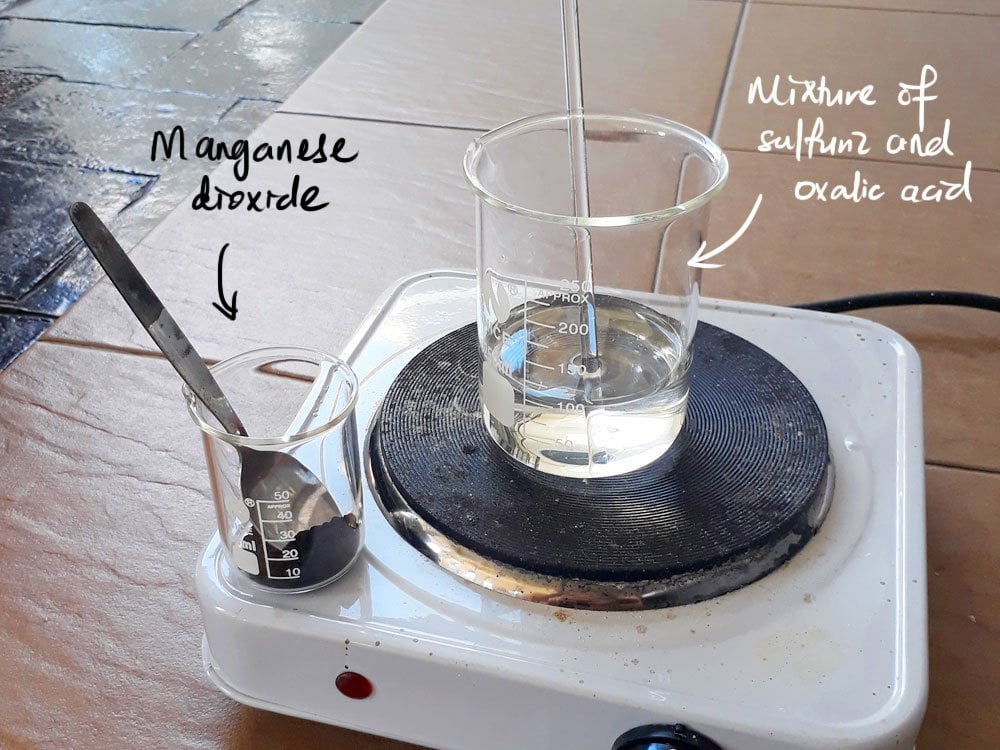 This specific ratio was recommended by NurdRage in one of his videos for optimum results. He mentions that a different ratio will cause the product to be more contaminated with iron, and become brown instead of pink.

Once the acid had warmed up, I added the manganese dioxide paste into the beaker bit by bit. There was a lot of fizzing, showing that a reaction was indeed taking place.

The manganese dioxide was first reduced by oxalic acid, after which it reacted with sulfuric acid to obtain manganese sulfate. Carbon dioxide was also released as a by-product, hence the fizzing.

After 20 minutes or so, the fizzing had more or less stopped, indicating that the reaction was complete.

I turned off the heat, and let the solution cool down. As the remaining particles settled to the bottom of the beaker, I could see a pale pink solution of manganese sulfate, which made me quite happy.

However, the color was extremely pale, meaning the solution was still very dilute. I heated it for another hour or so to evaporate off the excess water, leaving a much more concentrated solution.

In total, I did 3 runs, using 70 grams of manganese dioxide paste. This yielded about 1L of solution, which I boiled down to saturation at 150 ml. I knew it was saturated because some white flakes started to form at the surface – these were probably manganese sulfate monohydrate precipitating from solution. (The crystals I want to grow are the tetrahydrate).

As a side note, not all of the 70 grams dissolved into the acid. A large amount of it simply refused to react, and every time I filtered it there would be this leftover black paste. I thought it was just unreacted manganese dioxide, so I gathered it and reused them in my third run. 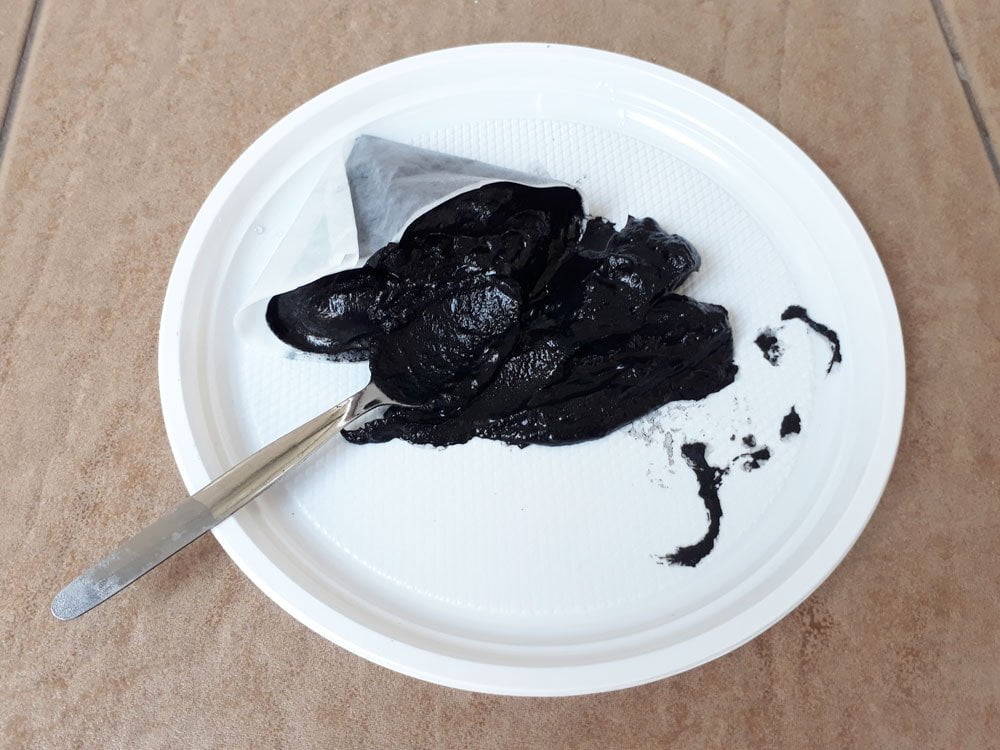 However, there was much less fizzing when I added this “recycled” paste, and the resulting solution that I obtained was brownish instead of pink. In hindsight, I think it was mostly carbon and some iron compounds. If you try this yourself, I suggest not to recycle any paste.

Regardless, I now had my manganese sulfate solution. However, the color of the solution was closer to lilac than pink. This meant that there were some impurities inside, especially from my third run.

So I decided to purify it via recrystallization – which meant growing a batch of crude crystals and then re-dissolving them to get the pure solution.

All I had to do was to leave the solution to evaporate.

The next week, small crystals of the tetrahydrate started to form. These were actually transparent, unlike the white fluff that appeared when I heated it to saturation. In fact, they looked like copper sulfate crystals, but much more transparent and tinted a faint pink. 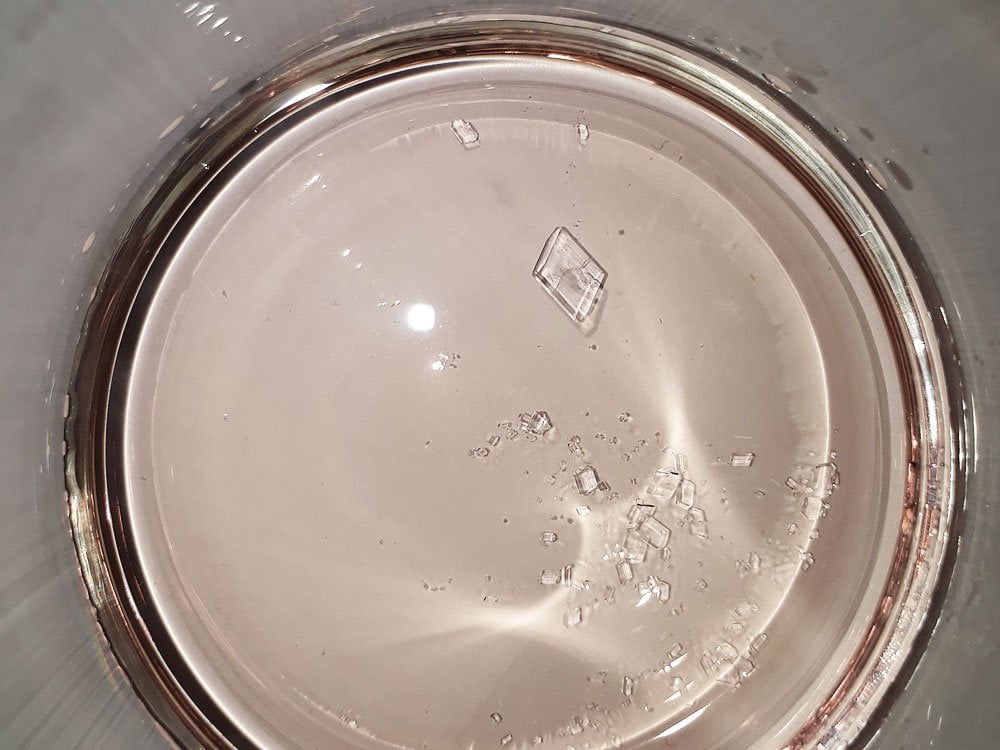 These crystals grew surprisingly quickly, and at the end of the second week I had some sizeable crystals. Even so, the solution was pretty viscous, and evaporation was slow. 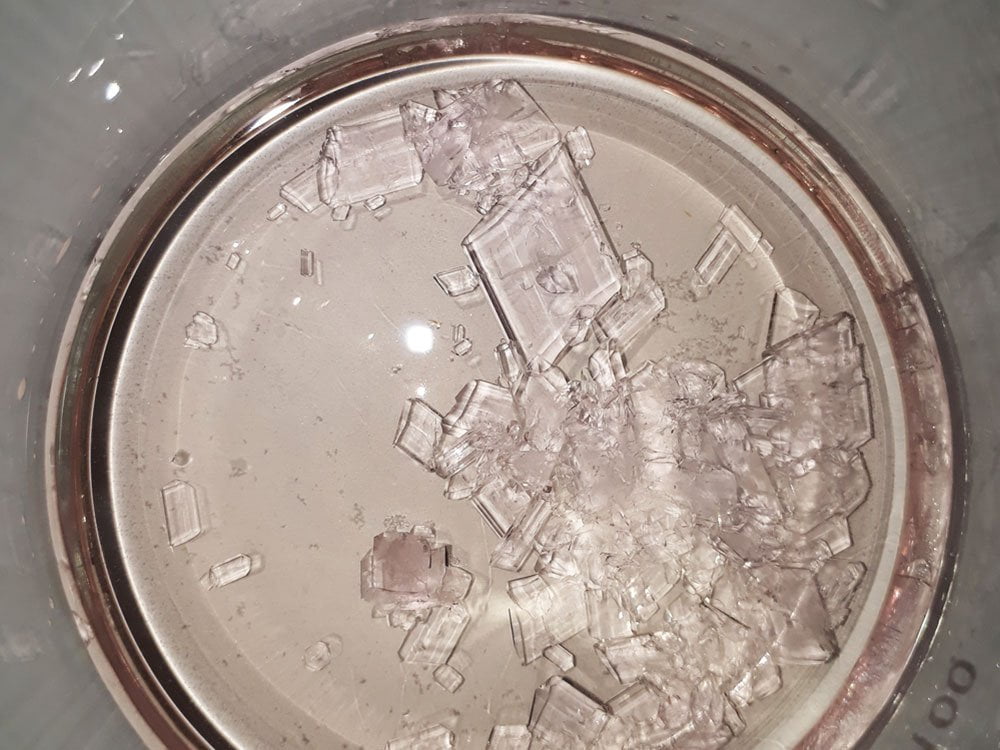 I took the beaker out to take some pictures, and then poured the remaining solution into a petri dish to speed up evaporation, removing the crystals in the process. 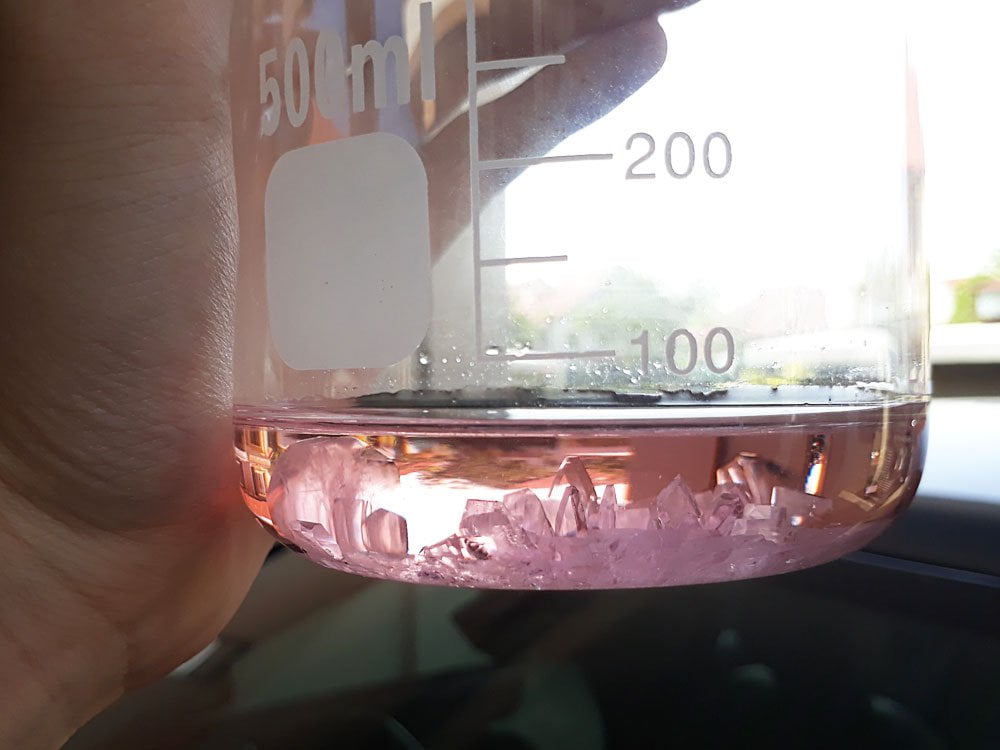 They weren’t very well formed, as growing beautiful specimens was currently not my intention. Still, they looked a very clean shade of pink, meaning my recrystallization was successful. I washed them with cold water and subsequently stored them in a sealed container.

At the end of the third week, 90% of the solution in the petri dish had also evaporated, and the remaining solution was now very brown. I washed the new crystals and combined them with the previous batch.

Finally, I had 50 grams of pure, pink manganese sulfate tetrahydrate. Even though they were crude crystals, the color was still very pretty. Unlike the striking blue color of copper sulfate or the glassy hue of iron sulfate, manganese sulfate has a pleasant, elegant vibe to it. 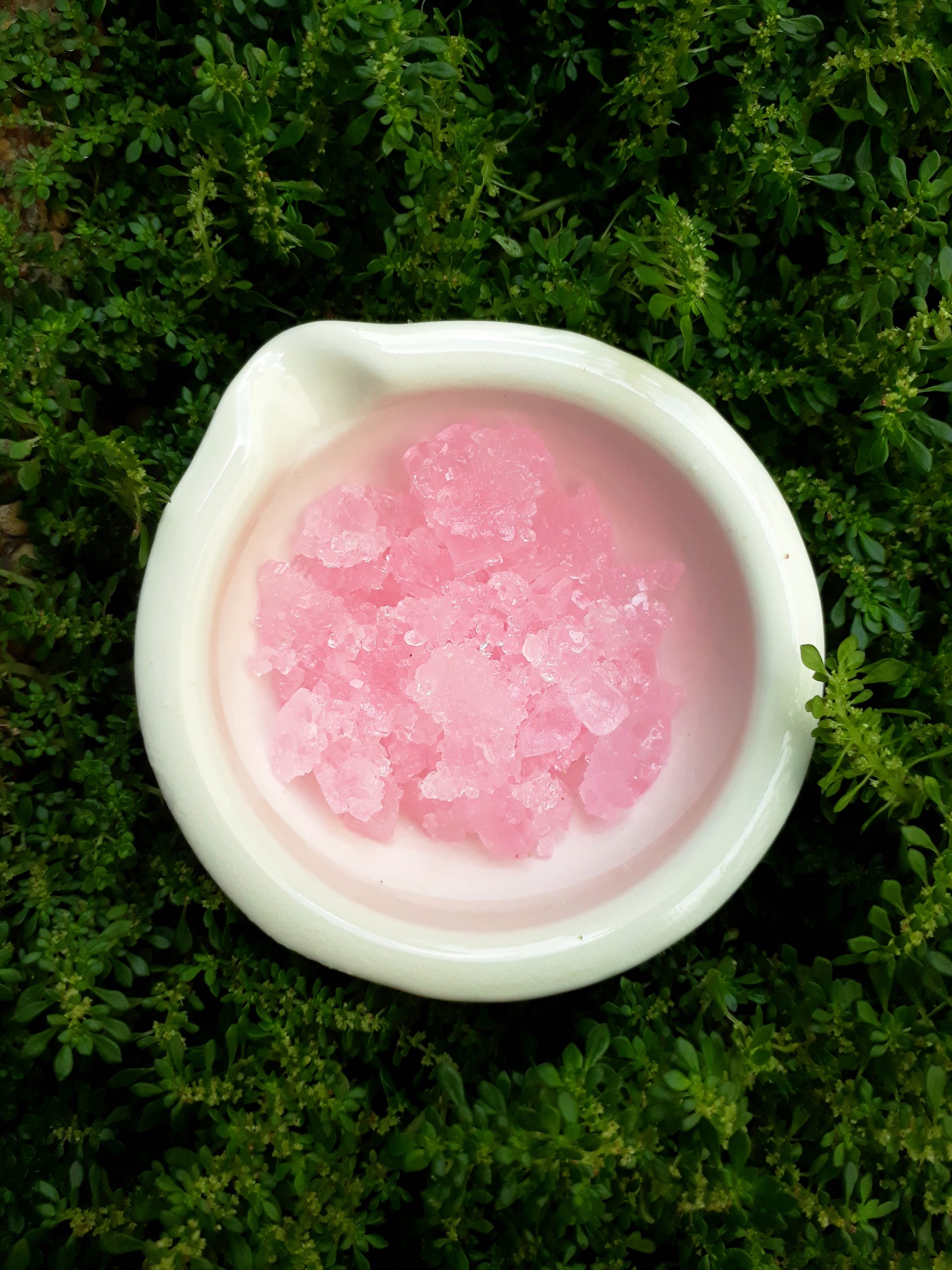 And to think that I made them from batteries; that makes them even more special.

That’s all for now.

In my next post, I grow actual crystals using the manganese sulfate I made. Stay tuned!

Meanwhile, why not take a look at how I made and grew green iron sulfate crystals here.