Put a small limestone into a cup, pour some vinegar into it, and watch crystals form within days!

This is one of the simplest ways to grow your own crystals at home. All you need are some limestone rocks and a bottle of vinegar.

There are also two advantages to growing these crystals:

Before we start, some of you might be wondering where you can get limestone.

Easy. As it is used in both construction projects (to make cement) and as decorations in gardens, you might find a few pieces lying around in the park.

They are also common in natural rock formations and marine environments. Fun fact: corals are made of limestone – so you can even try growing a crystal using a piece of dead coral!

Alternatively, just go to your local gardening store and buy a small packet.

Limestone rocks can look very different depending on the type of impurities in them. To tell if you’ve gotten the right rock, just do a very simple test.

Drip a few drops of vinegar on the rock. If it starts fizzing, congrats, that’s limestone.

I’ll explain the science behind this reaction at the end of the article. Now, let’s start making those crystals!

First, get a small container and place a piece of limestone into it. 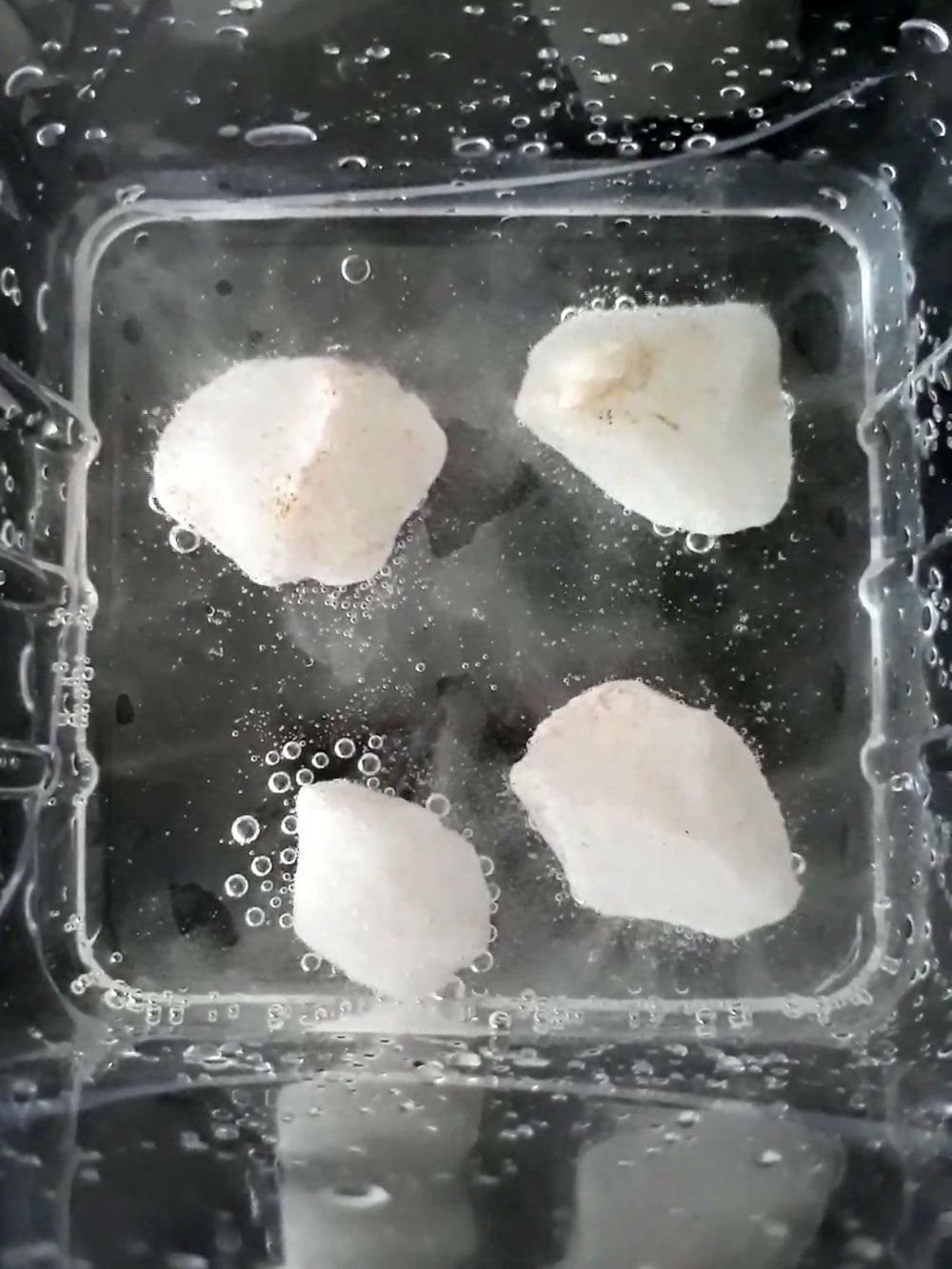 Place the container in an undisturbed place. A windowsill or a shaded part of the garage will do. Don’t worry too much about the location.

After a day or two, the vinegar will evaporate, exposing part of the rock. And on top of it, small, white formations will begin to grow. These are your baby crystals. 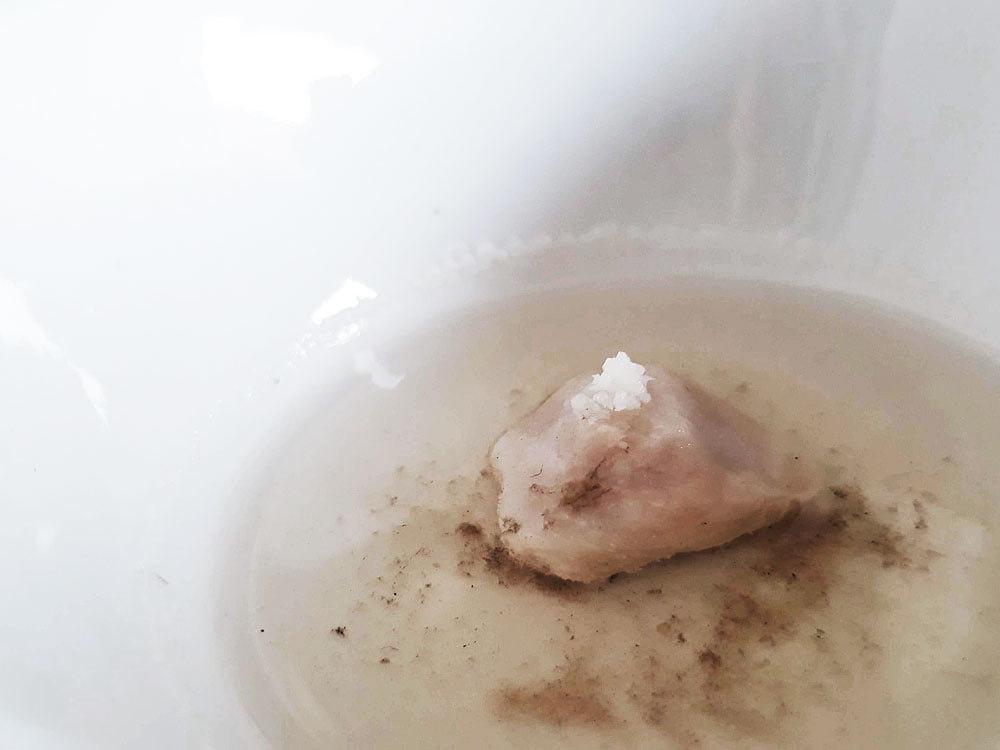 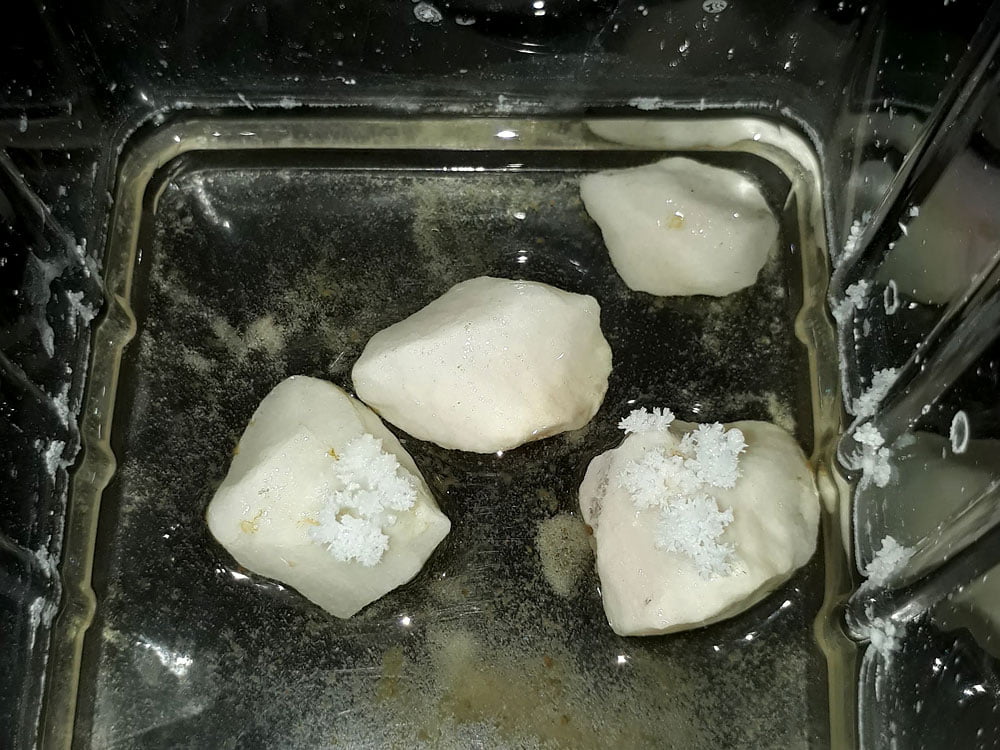 Different structures will form depending on the impurities in your rock. Sometimes, you’ll see crystals that look like branched corals, skeletal trees, or even bits of snow. Left over time, these crystals will grow slowly, spreading outwards and upwards, forming a patchwork of intricate patterns.

They are quite fragile though, so don’t touch them or they might break off.

Another thing to note is that those crystals might appear to grow – then disappear all of a sudden. This is normal. It can be due to wind snapping the branches off, or a sudden change in temperature. But over time, they will grow back.

Meanwhile, your solution might turn yellowish. This is because of the impurities your vinegar has extracted from the rock. 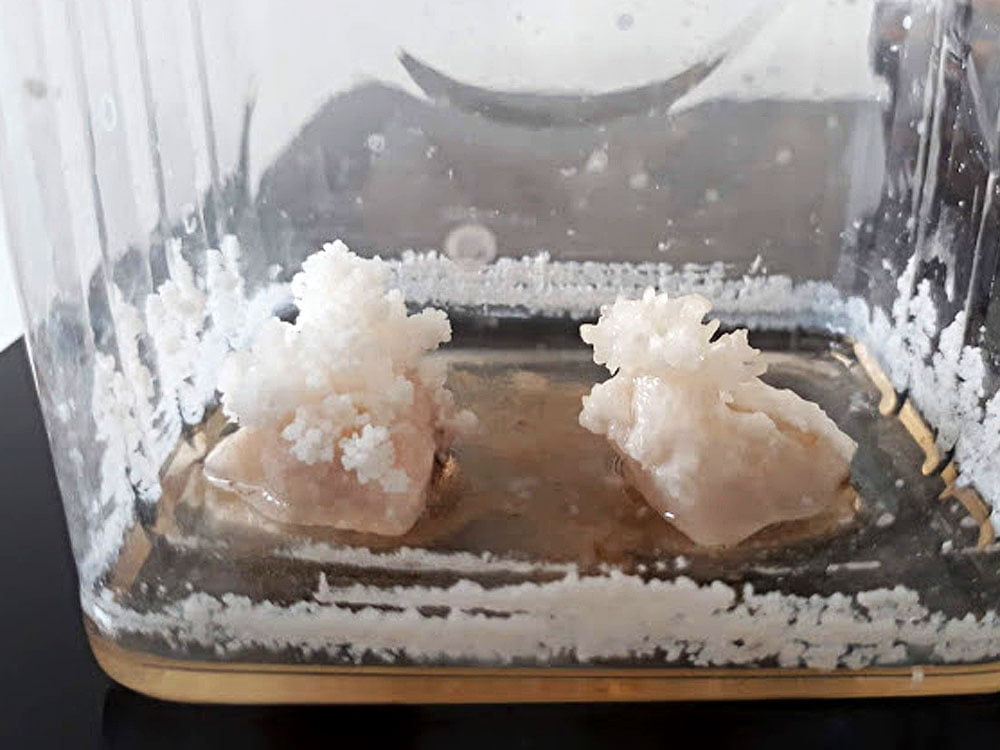 When the vinegar has dried completely, you’ll be left with a rock with some white crystals on top. The bottom of the container will be covered in a pale yellow crust. 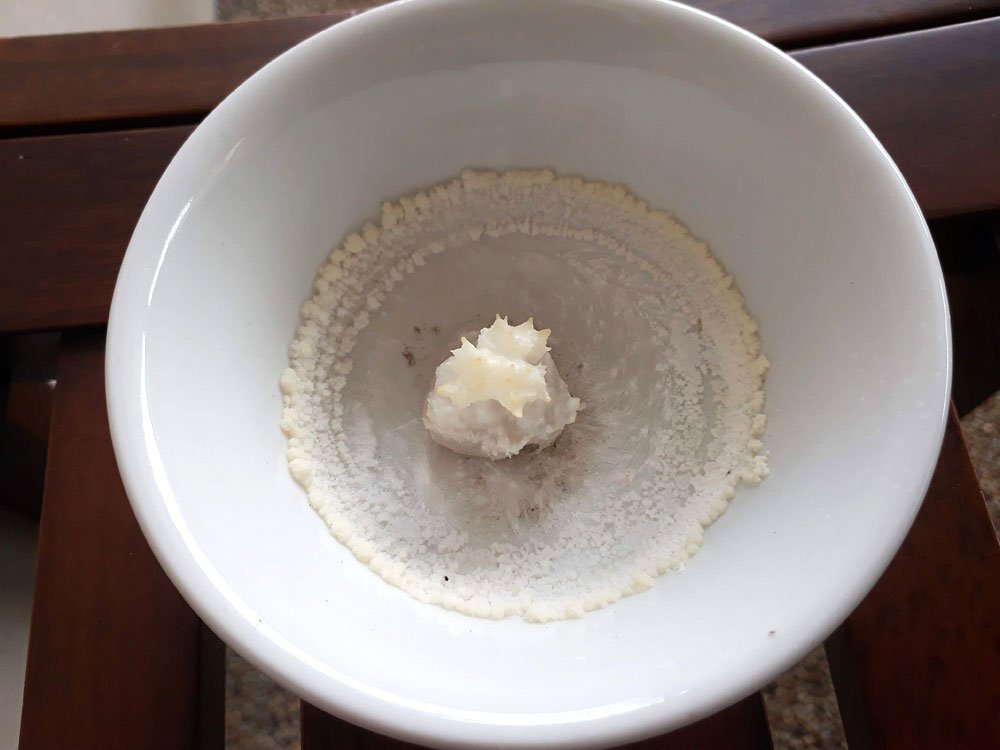 Remove your masterpiece carefully by holding the rock part, and not the crystal part. 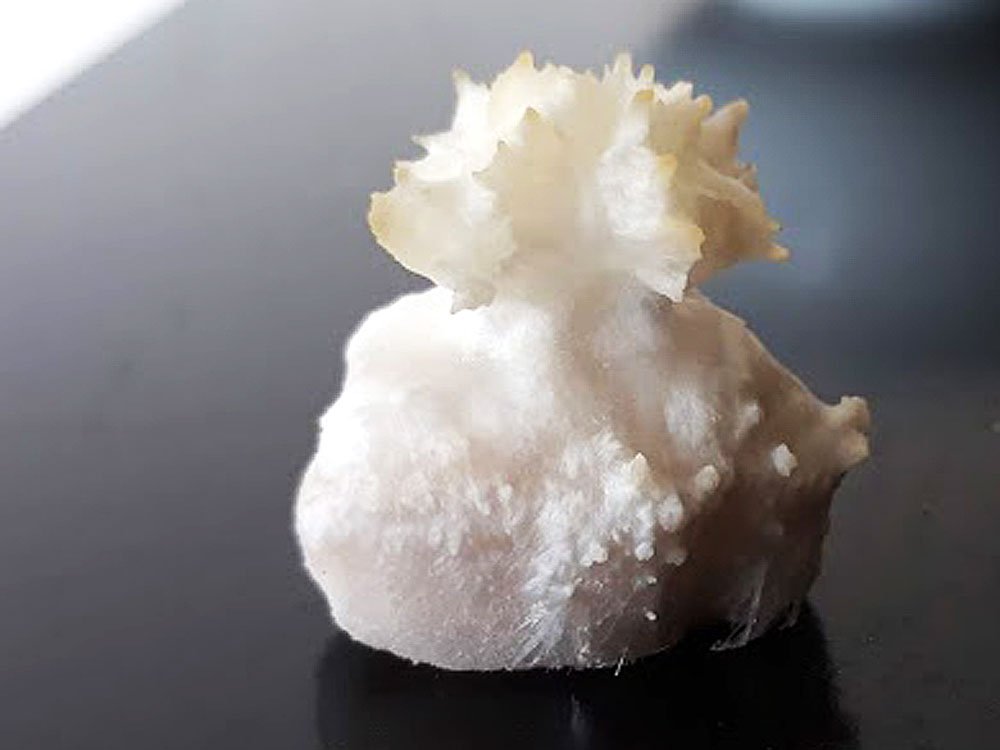 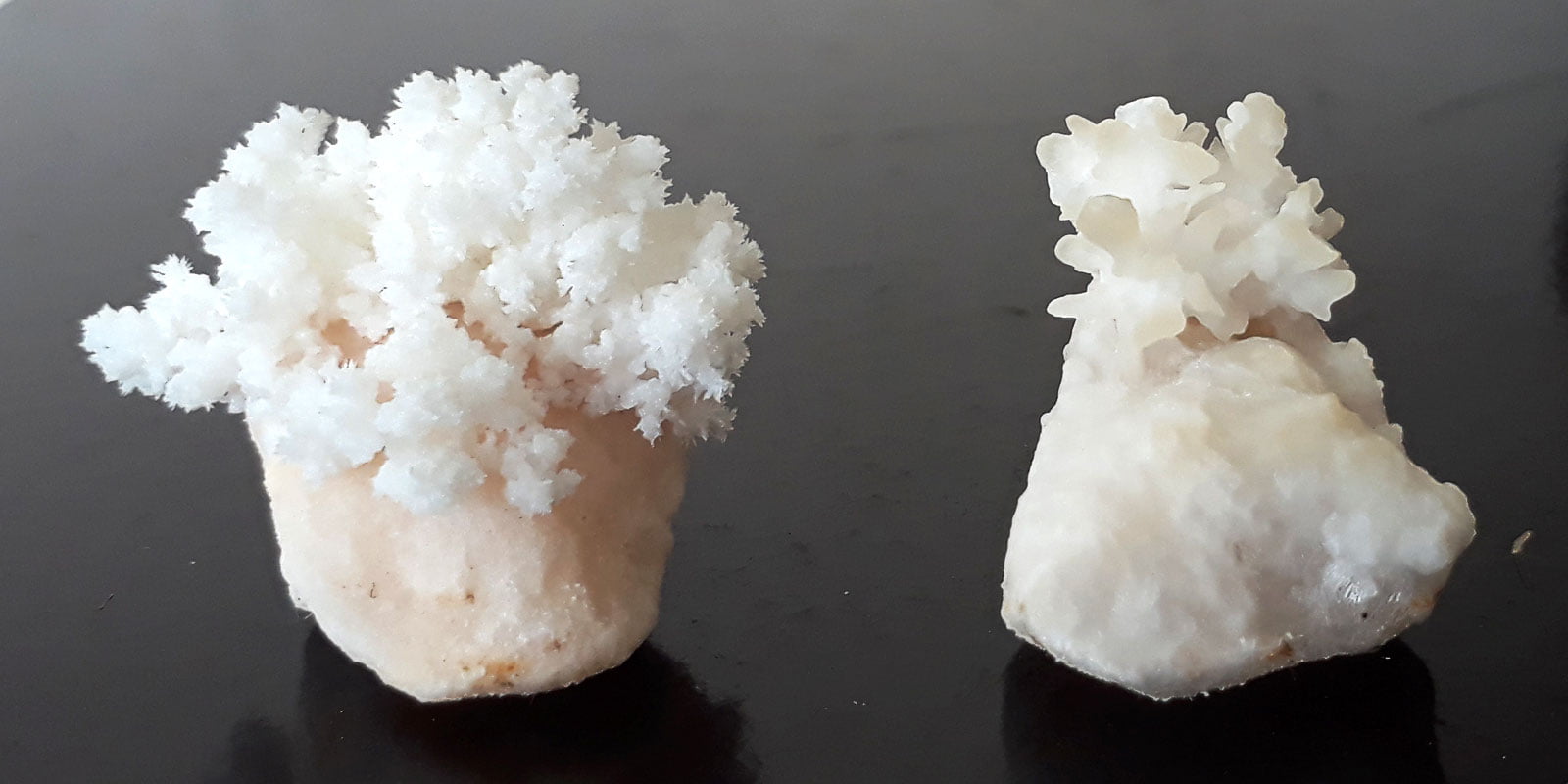 These crystals, although fragile, will not break down over time. Sure, after drying, they might whiten a bit but that’s all there is to it.

Never, ever wash them though – as the crystals will dissolve in water. A quick rinse and all your hard work will go to waste. Therefore, if you want to put them on display, it’s best to cover them with something transparent.

Anyway, aren’t they just beautiful? It’s unbelievable that something so easy can produce such good results.

If you’re interested in the science behind the project, this section is for you.

The coral-like crystals are actually made up of a compound called calcium acetate. When you pour vinegar (acetic acid) onto limestone (calcium carbonate), the acid reacts with the rock, forming calcium acetate, water and carbon dioxide. This can be represented with the following equation:

The carbon dioxide forms bubbles, while calcium acetate, which is a soluble salt, dissolves into the water.

In this experiment, your rock serves both as a source of calcium, as well as a medium for the newly formed crystals to grow on. In fact, once the bubbling has stopped, you can actually remove the rock and let just the solution evaporate. Similar crystals will form on the sides of your container. 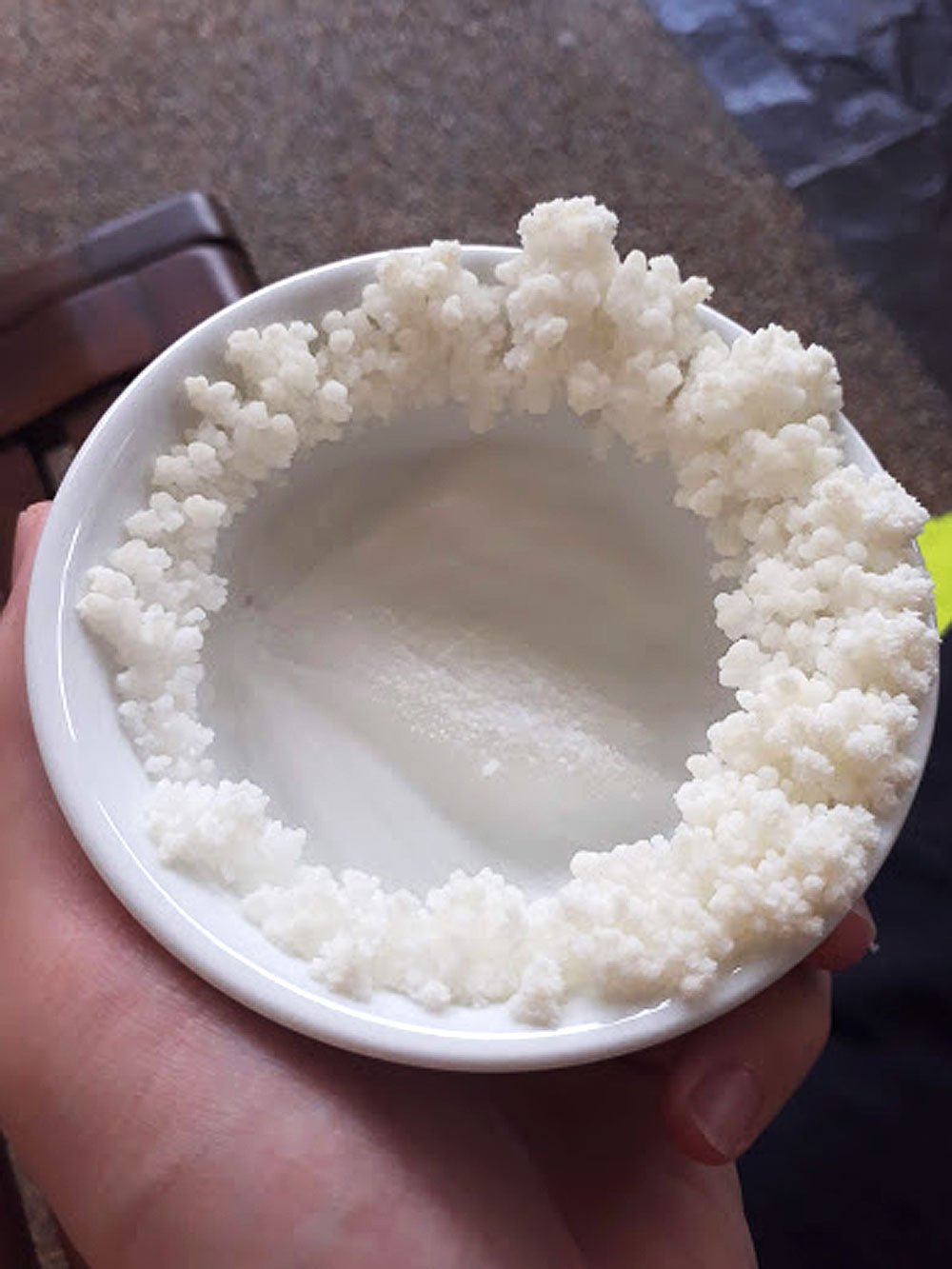 That’s all for now. Do give it a try, and feel free to share your results in the comments below. I can’t wait to see the specimens you can come up with!

Have some leftover vinegar? Check out how you can grow stunning black crystals using just vinegar and some scrap copper by clicking here. I think you’ll like it.

The Best Way to Grow Alum Crystals at Home