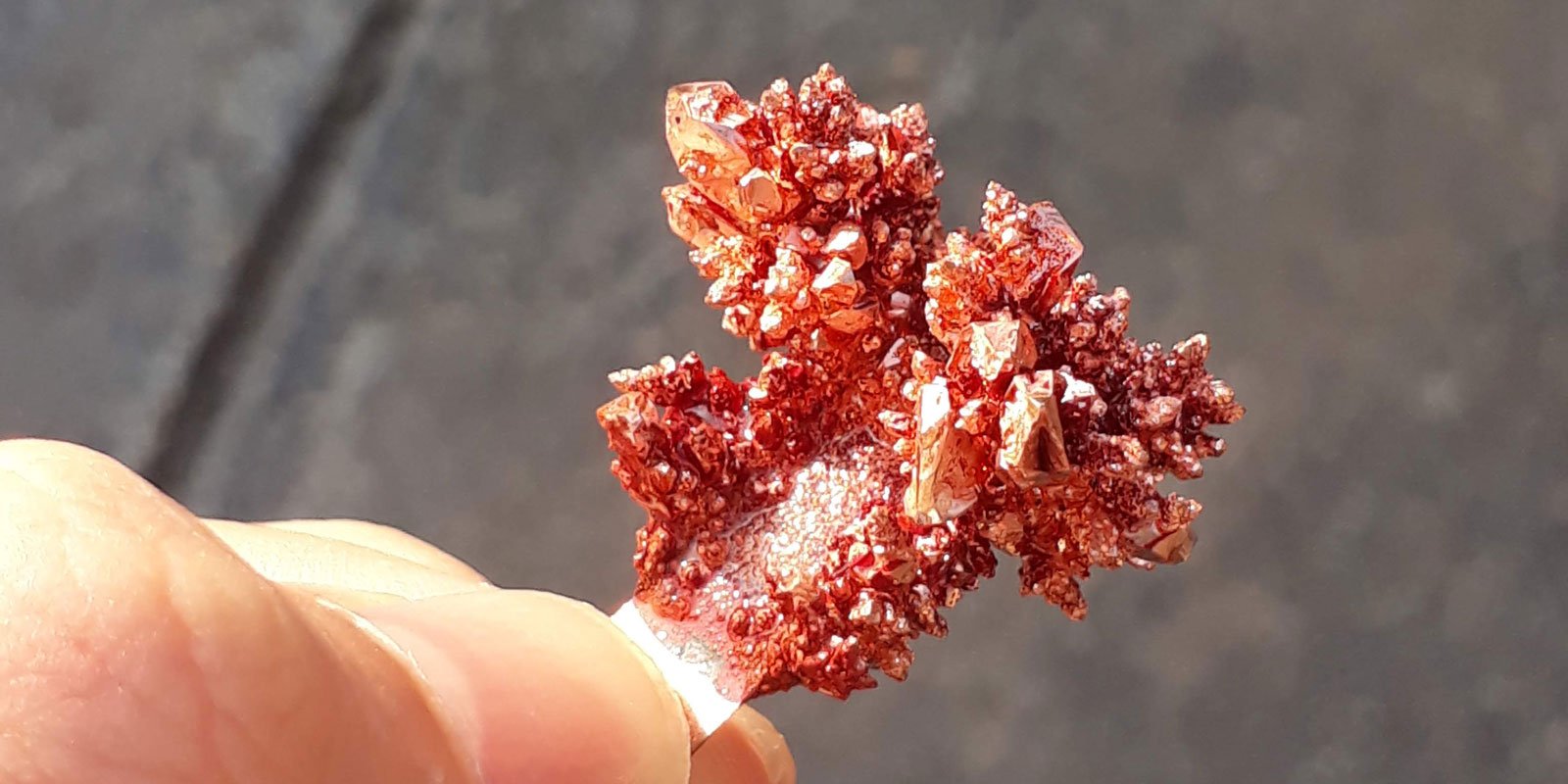 Two years ago, I grew a beautiful cluster of copper metal crystals with some copper sulfate solution and my power supply. I concluded my post by saying that changing the current will affect the shape of the crystals formed.

If you haven’t read Part I yet, you can check it out here.

A quick note: the experiments were actually conducted over a very long period of time, as I was busy with college life and growing other crystals.

Also, I wasn’t very scientific with my approach. I didn’t fix the size of the container, or the duration of the growth of the crystals. Nevertheless, I think my observations will still be both interesting and informative.

Let’s start where we left off. My first proper copper crystal, as featured in Part I, used the following setup: 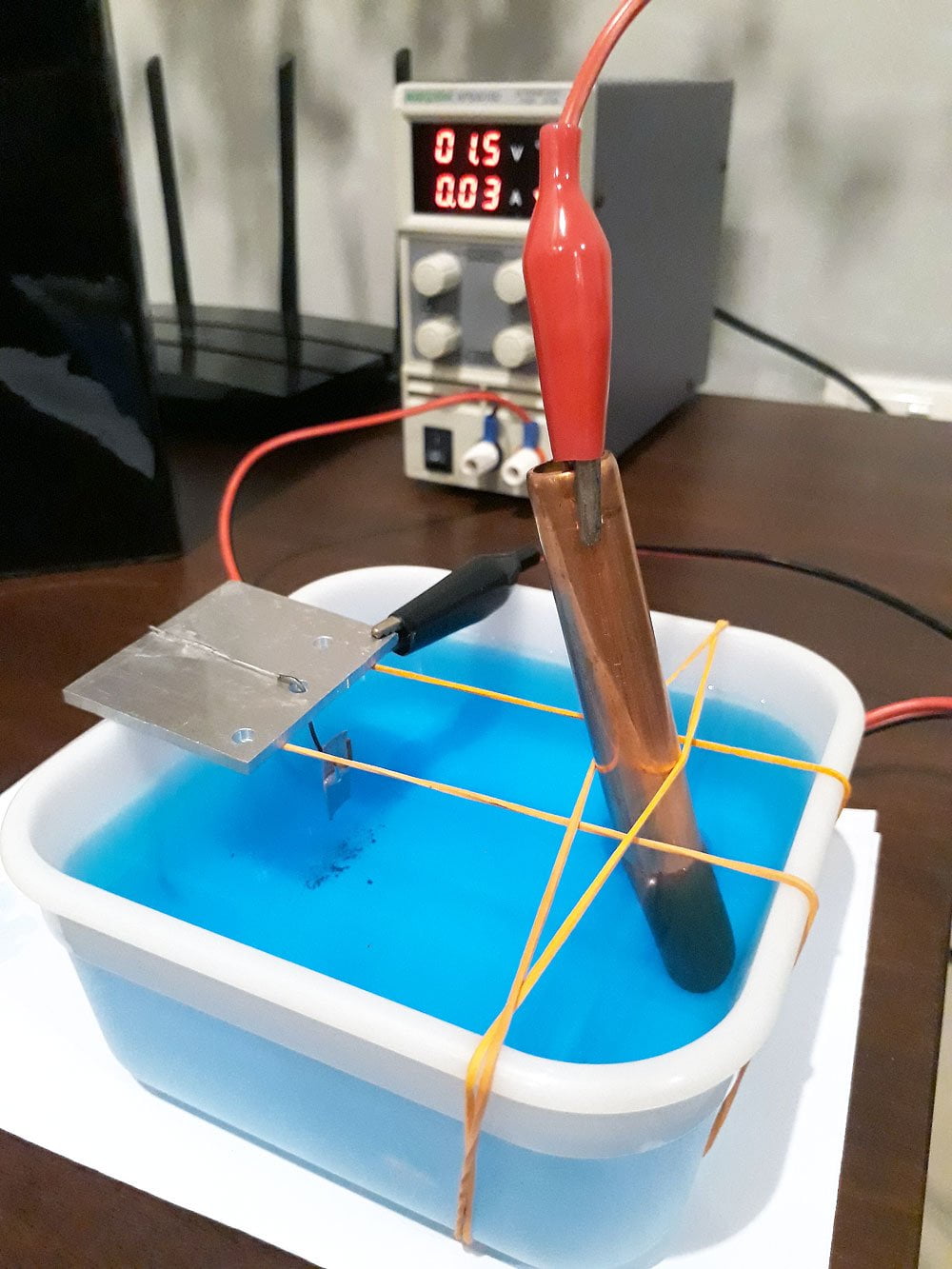 I suspended a copper plate in a 50g/L copper sulfate solution, which served as the negative terminal to grow crystals from. For the positive side, I used a copper pipe. Then, I connected both ends to the power supply.

For those of you who are unfamiliar with electrochemistry, I’m actually dissolving the (positive) copper pipe into the solution using electricity. By a chemical reaction, copper metal atoms turn into copper ions. Then, these copper irons are attracted to the (negative) copper plate, and turn back into atoms, forming copper metal crystals in the process. 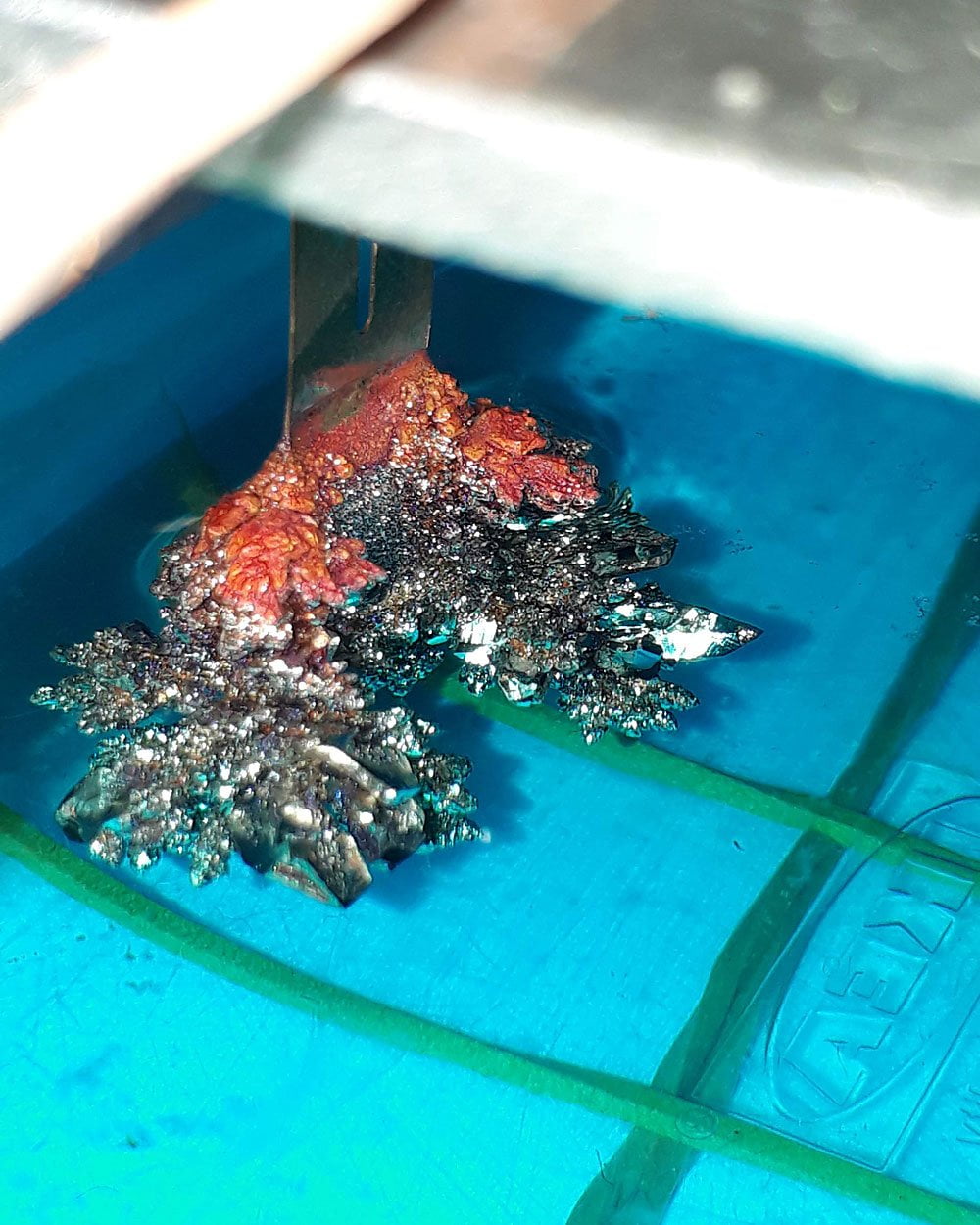 Thus, I had my first specimen: 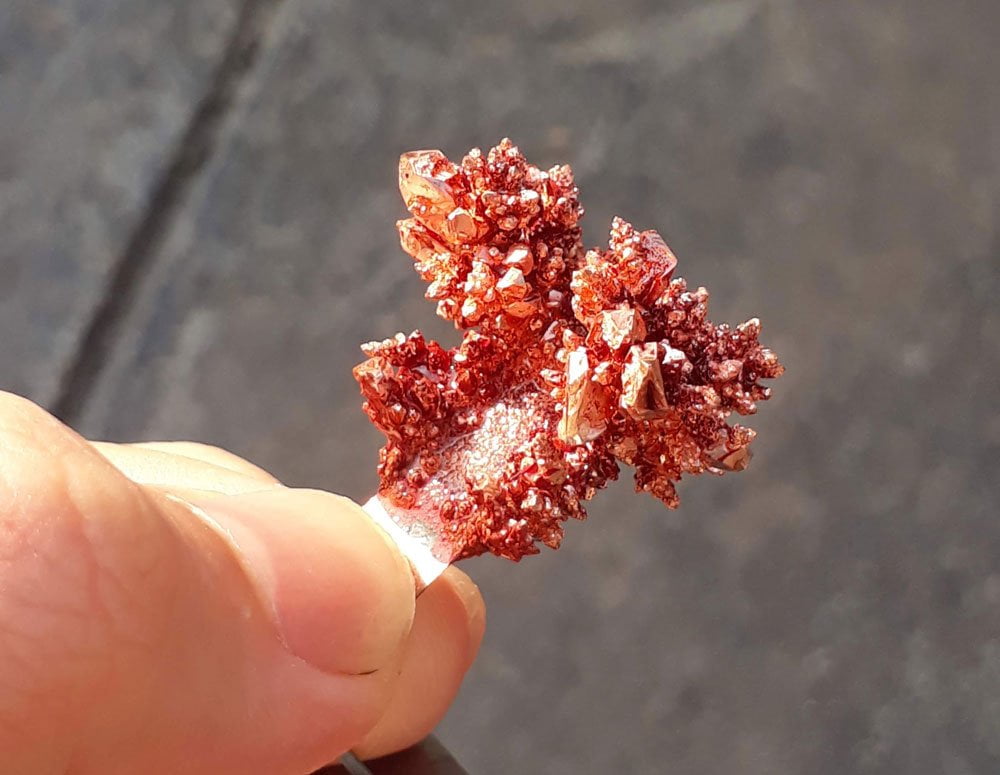 Alas, the crystals were quite brittle, and I accidentally broke some of them off. Here they are, 2 years later. 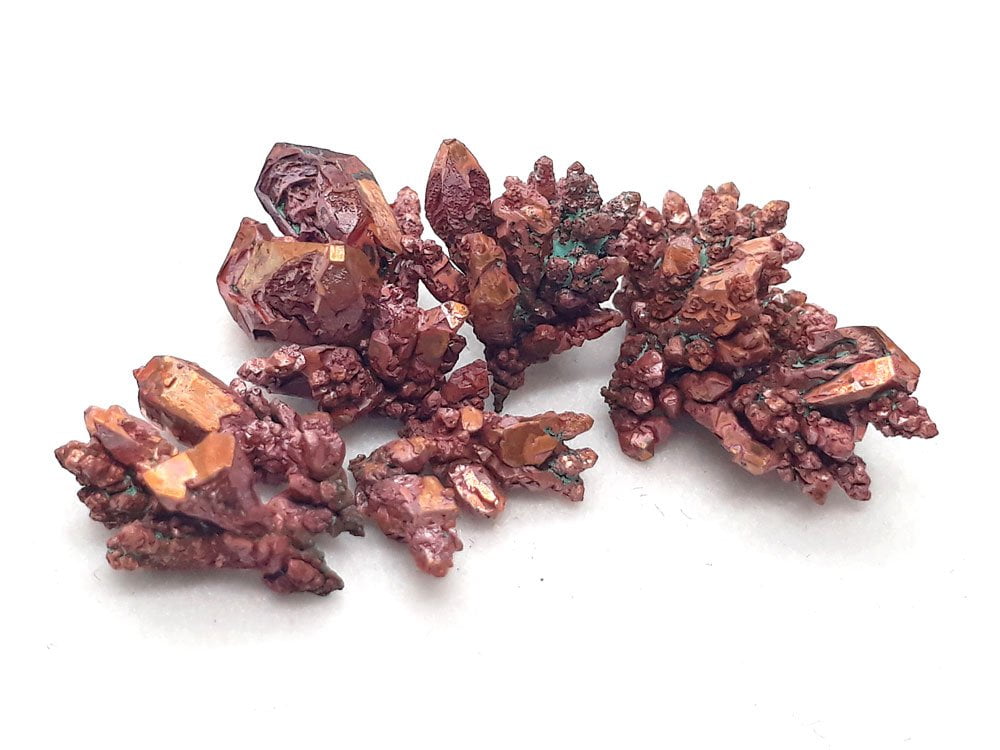 They actually look pretty good. In fact, other than turning a little brown in the first few days, they haven’t changed at all.

Another interesting thing is that the individual crystal faces on this specimen are extremely well defined. You can see the facets of the larger crystals clearly. I’m not sure what caused this, because I have been unable to replicate this ever since.

After this crystal, I grew two more small ones, changing the current each time. Here was what I observed: 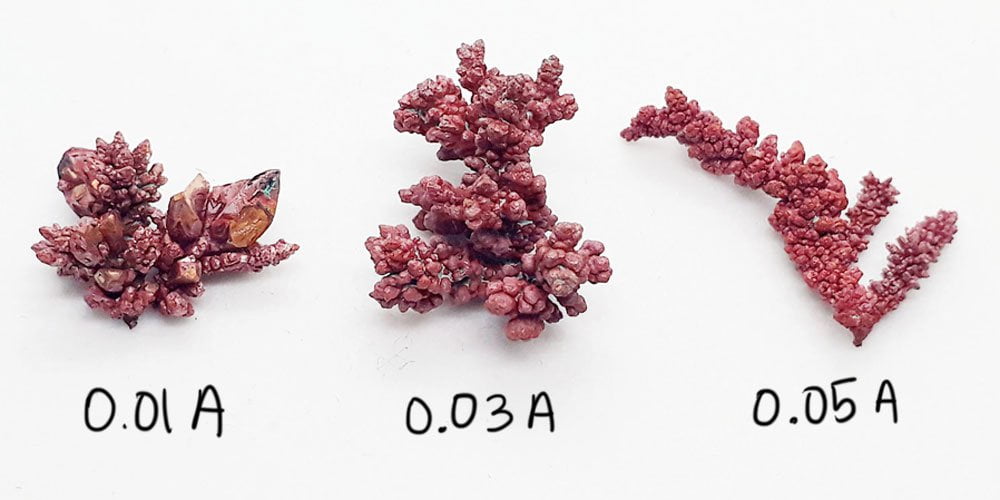 Note: These are fragments of the original crystals.

But there is definitely some relationship with the current. The greater the current, the faster they grew, and the longer and spikier they became.

At 0.01A, it takes a week for the crystals to reach 1 cm; it takes only a day at 0.05A. Of course, the downside is that longer and spikier crystals are more fragile. Above 0.07A, the crystals are unable to support themselves and fall off the cathode spontaneously.

Over the next two months, I grew two more big crystals. This one came first, grown for 14 days at 0.03A, finally weighing 26g: 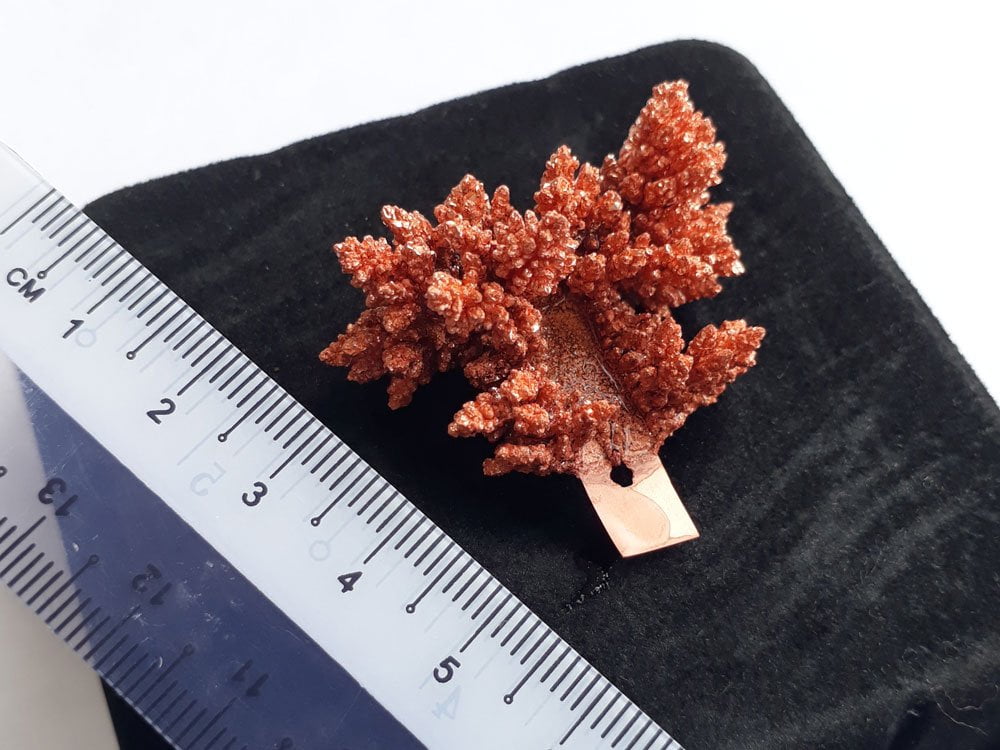 And this is what it looks like after almost 2 years: 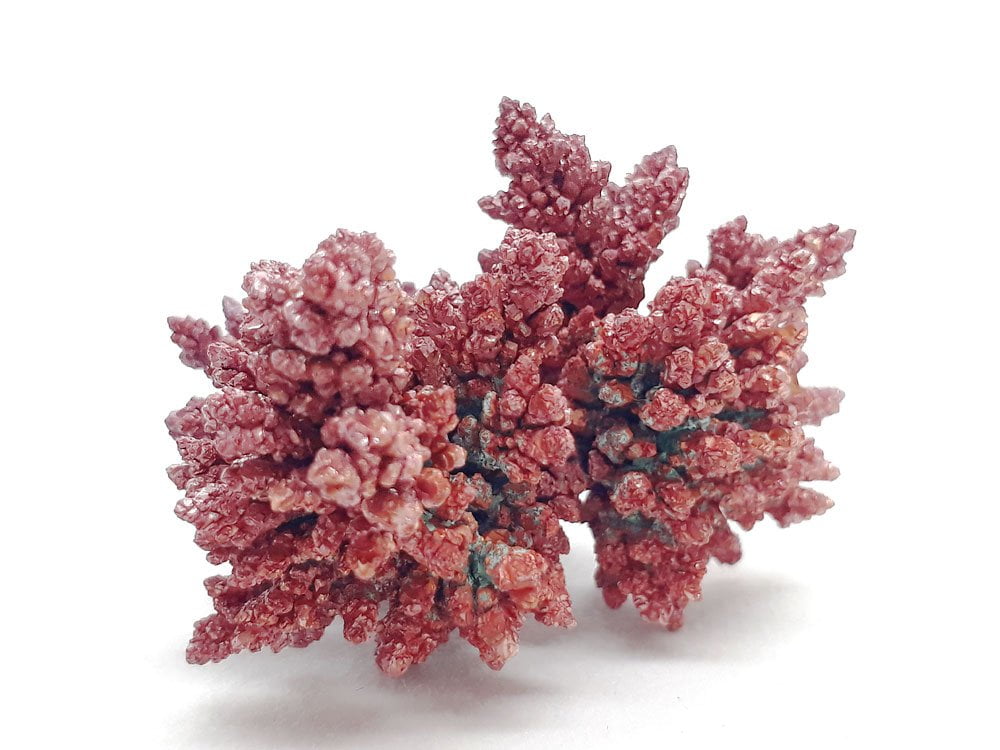 Like the previous crystal, it actually oxidized into its current form only after a few days. It has looked exactly the same for the past 2 years. This is true for all other crystals shown below.

After that, I grew another crystal for 9 days at 0.01A, trying to replicate the big crystals I achieved with my first attempt. It didn’t really work, but I got something unique: 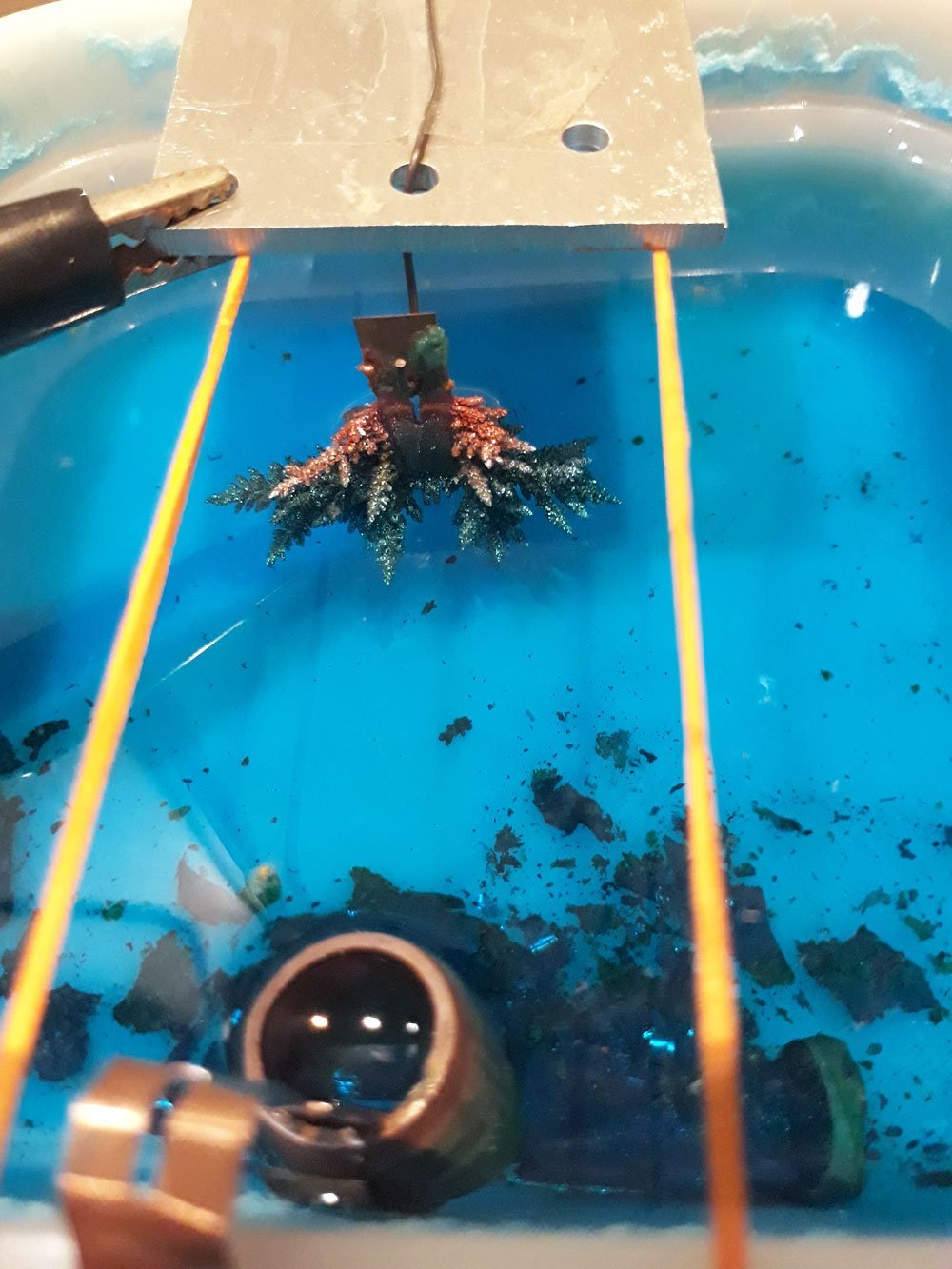 The crystal weighed 11g. Notice that the rate of growth was slower than the previous crystal due to a lower current (0.01A vs 0.03A).

Nonetheless, it is surprising that despite the lower current, this crystal was spikier than the one above, contradicting my initial observation. The setup was exactly the same.

Also, this crystal’s surface was much shinier than the previous one. 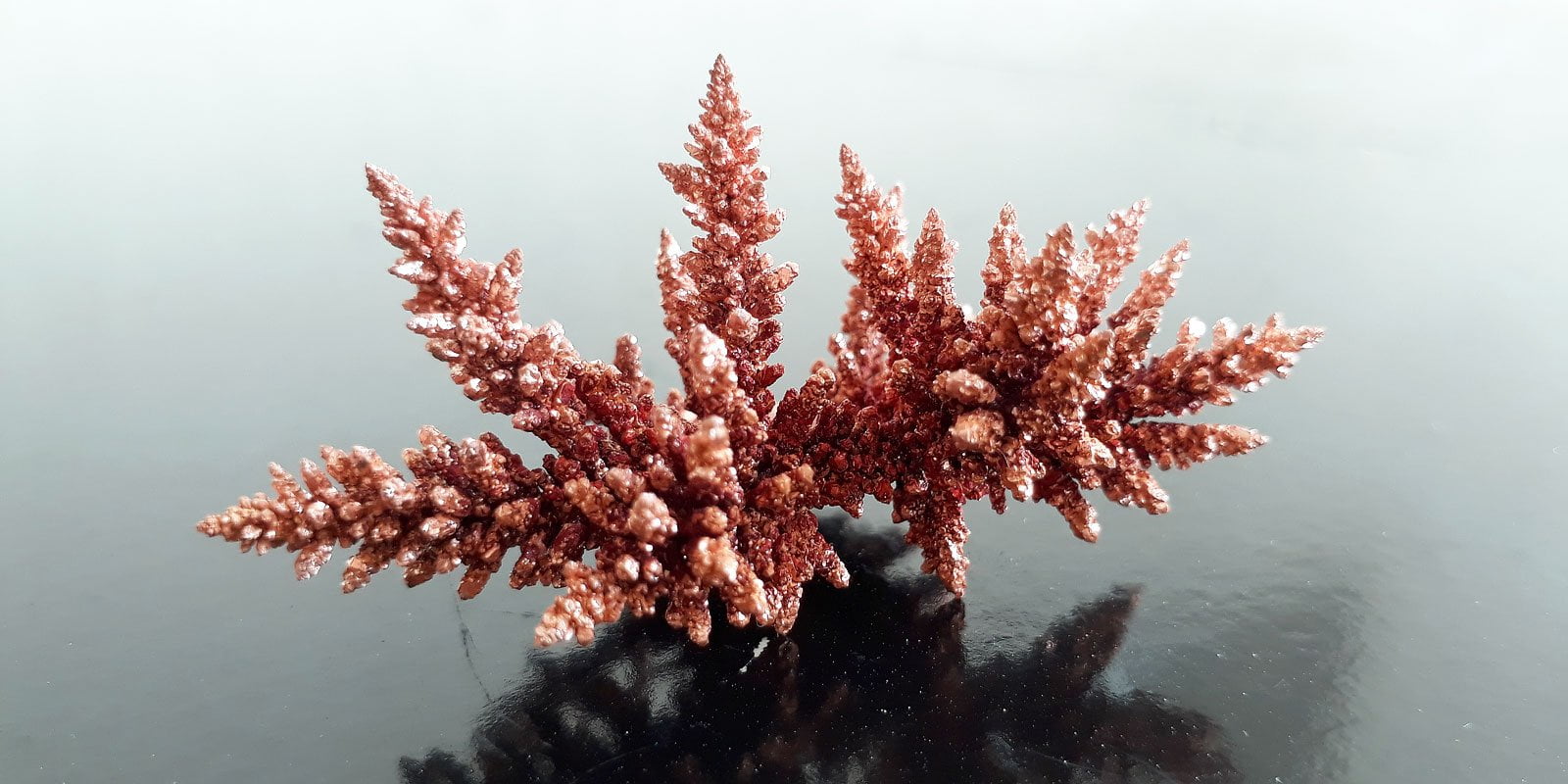 It remained quite shiny even after oxidizing. 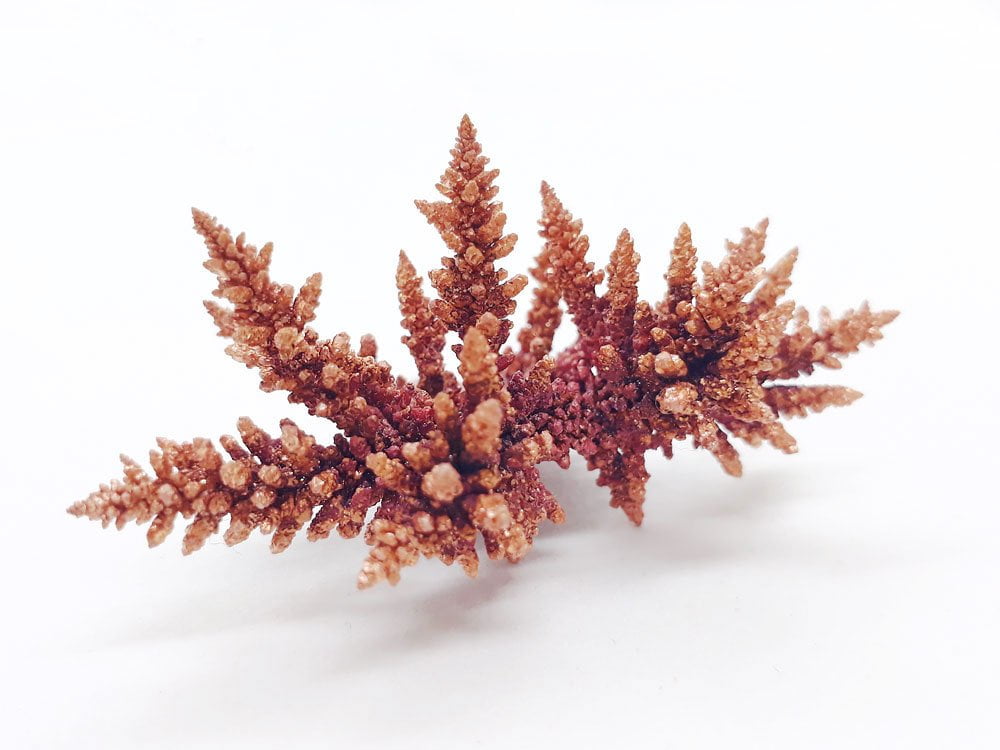 Then, having used up the entire foot of copper pipe, I stopped my experiments for some time.

The next year, I decided to revisit growing these crystals. I also found this video on copper metal crystals quite instructive. This time I used a bigger container, which could hold up to 1.5L of solution.

To that container, I added 50g/L copper sulfate solution, and stuck another foot-long copper pipe (64g) into it. 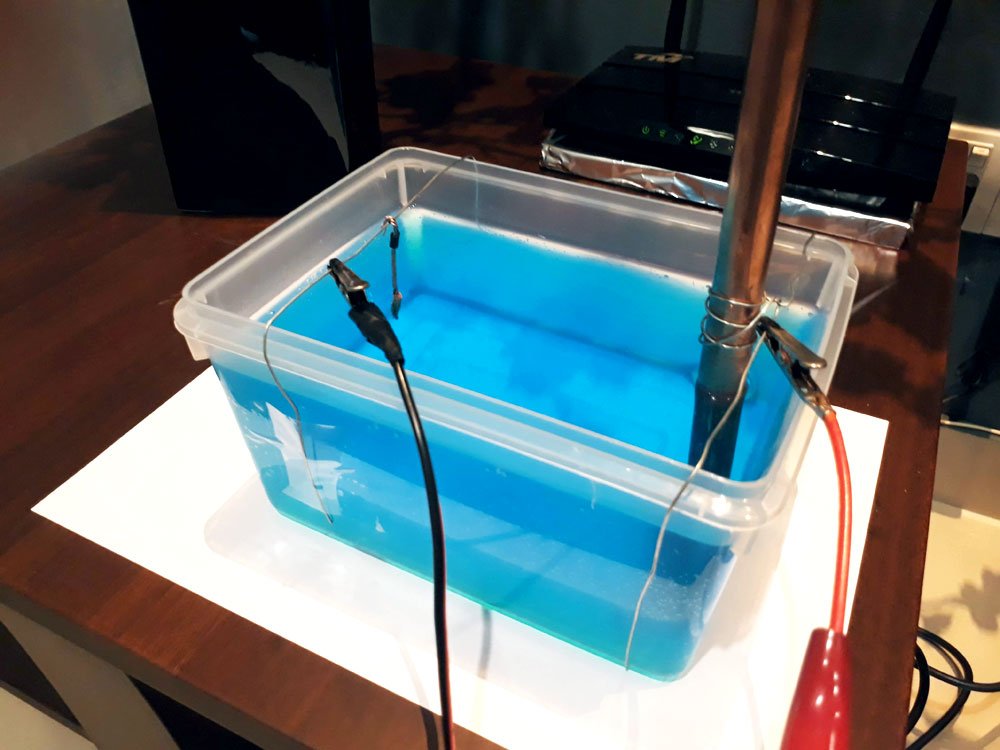 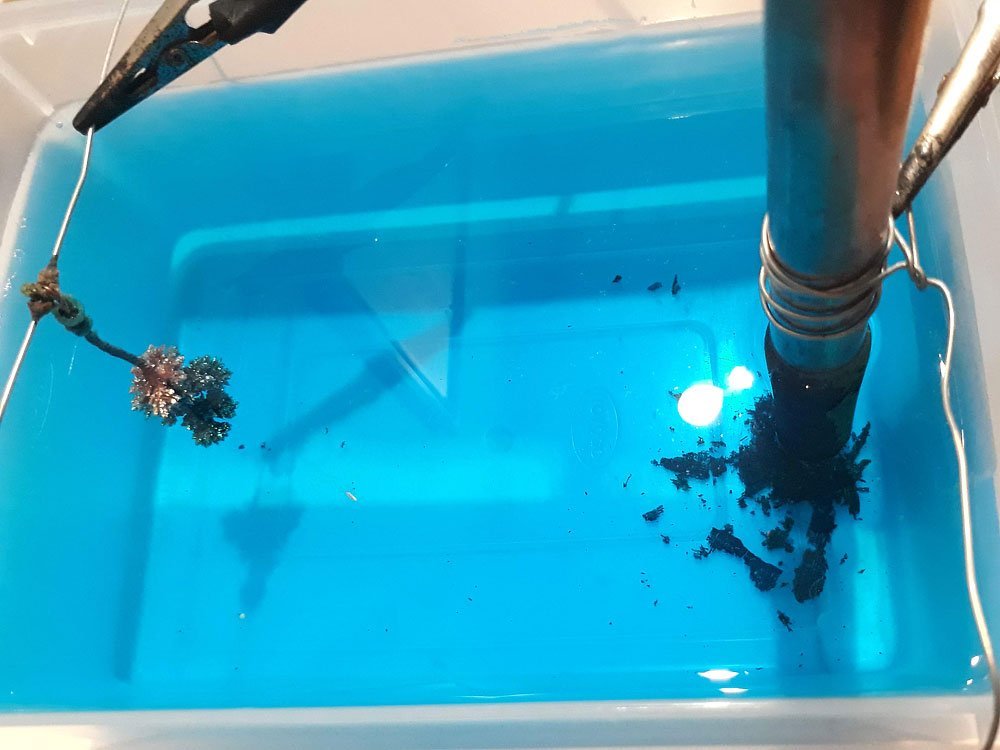 It was going pretty well, and the crystals were growing nicely. Then, I noticed that the solution was getting drawn up the copper wire, until it touched the steel wire I was using to suspend it with. Thus, the steel wire started corroding, and after 5 days, it got dangerously close to breaking.

This meant I had to replace the steel wire with some copper wire.

I took the growing crystal out of solution and set it aside. After that, I spent an hour stringing a copper wire through the container. Then, I put everything back together and restarted the power.

But there was a problem.

My crystal had oxidized in air when I took it out, and when I put it back in, the oxide layer stayed there, which meant the crystal was much duller than before.

Even as new copper metal crystals grew, only the tips of the crystals were shiny, while the base remained dull.

You can see that in this next pic, taken 2 weeks after the start. 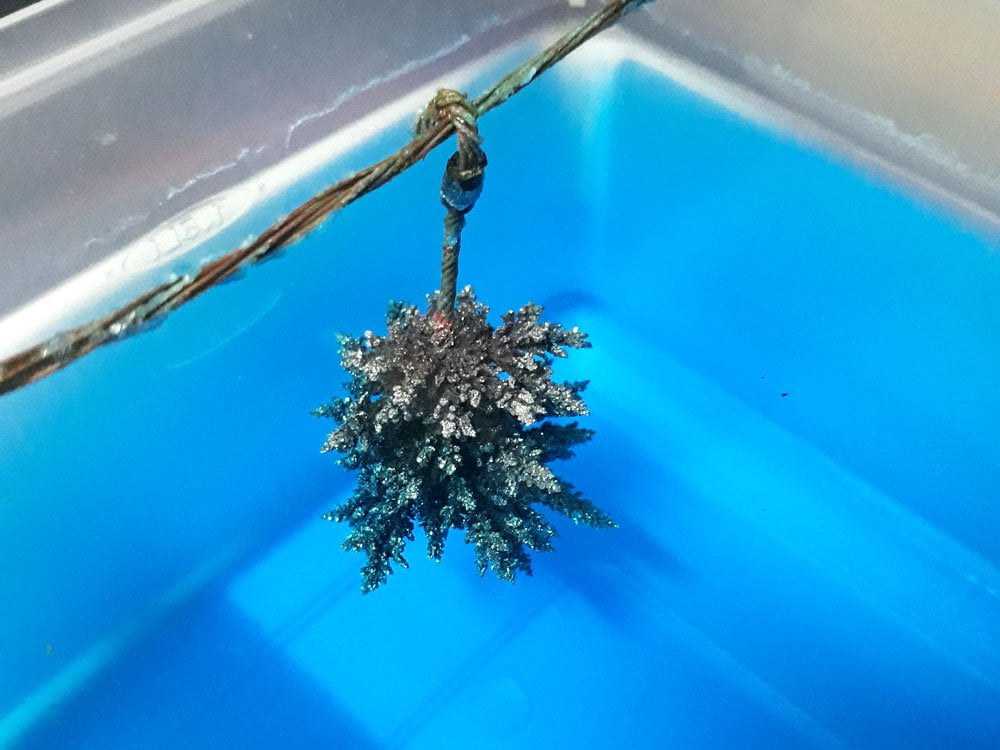 Notice that the middle is black, while the tips are shinier.

In an attempt to make the entire crystal shiny again, I decided to increase the current from 0.01A to 0.05A.

This did make the crystal spikes grow faster. However, I couldn’t save the base of the crystal. 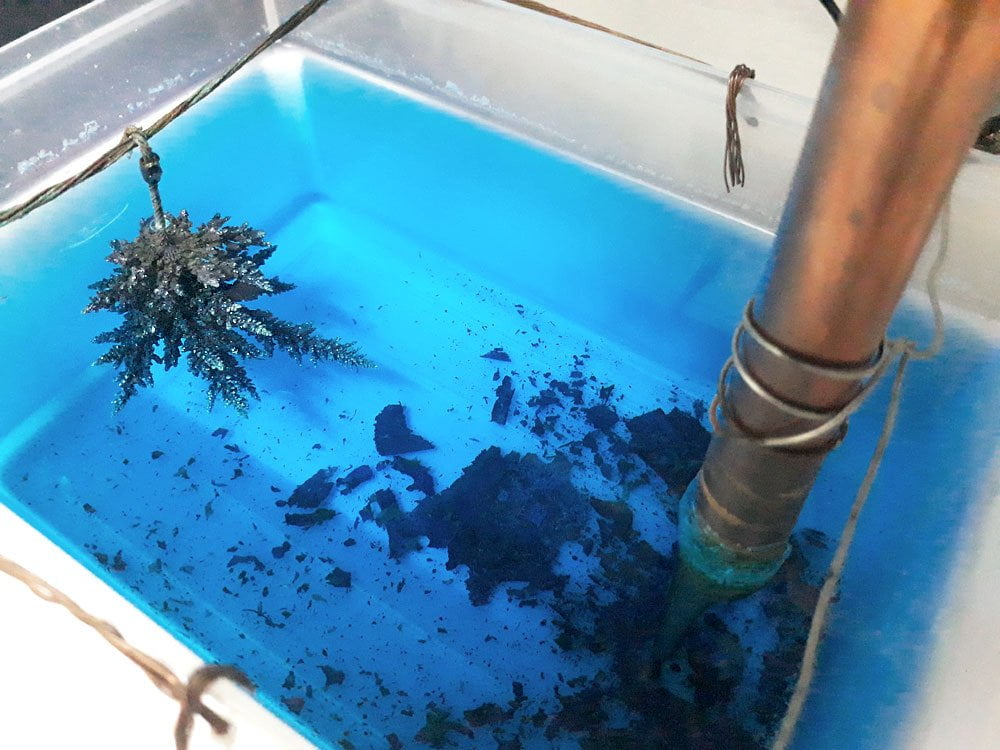 Three weeks into the growth, I took it out of solution and washed it with running water. The whole thing weighed 39g, and as a nod to chemistry, the copper pipe weighed exactly 39g less.

Most of my crystals have a tendency to split into smaller chunks, and this was no exception. It broke into 1 big, 1 medium sized, and 3 smaller fragments. These were much more stable. 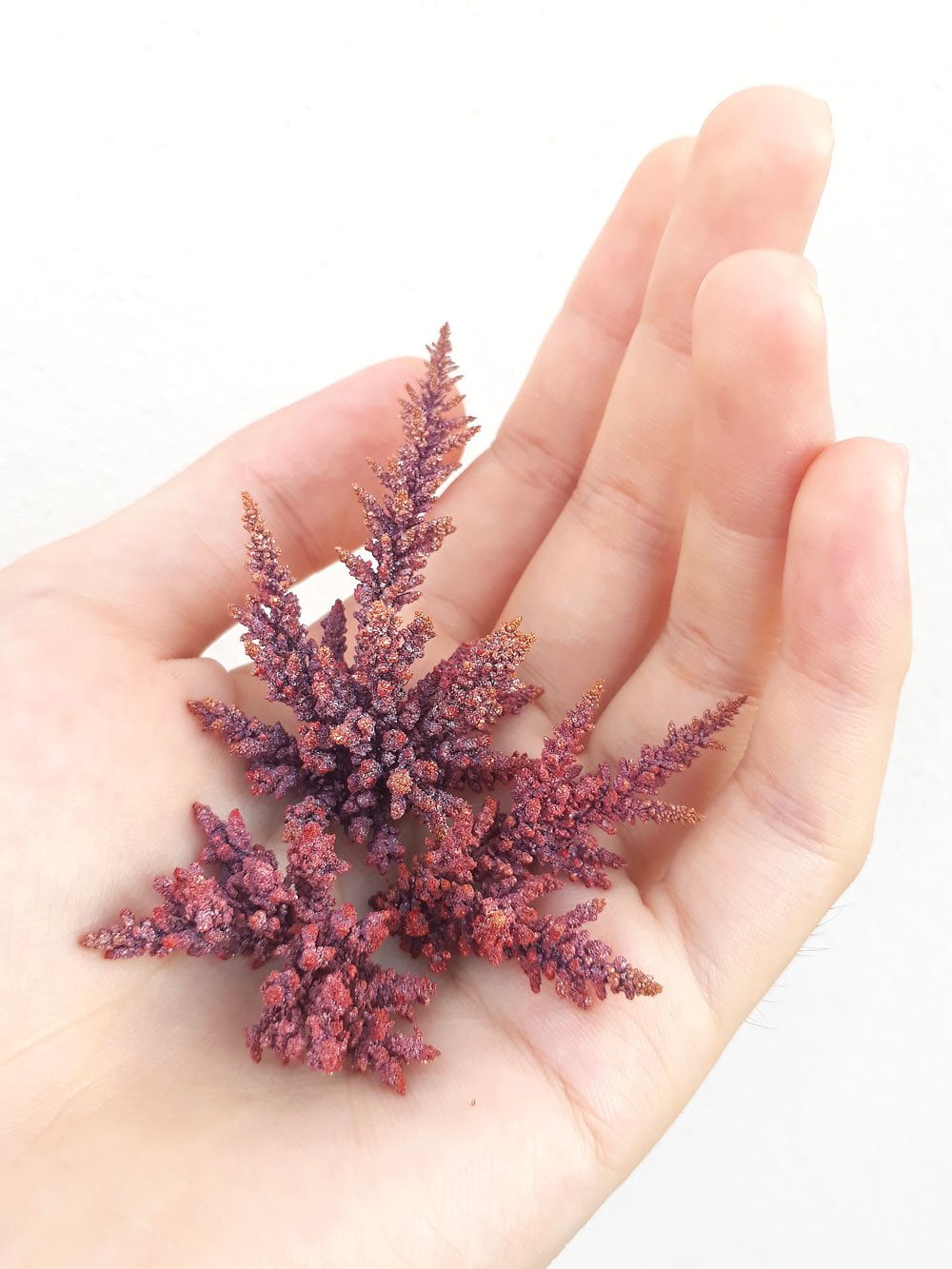 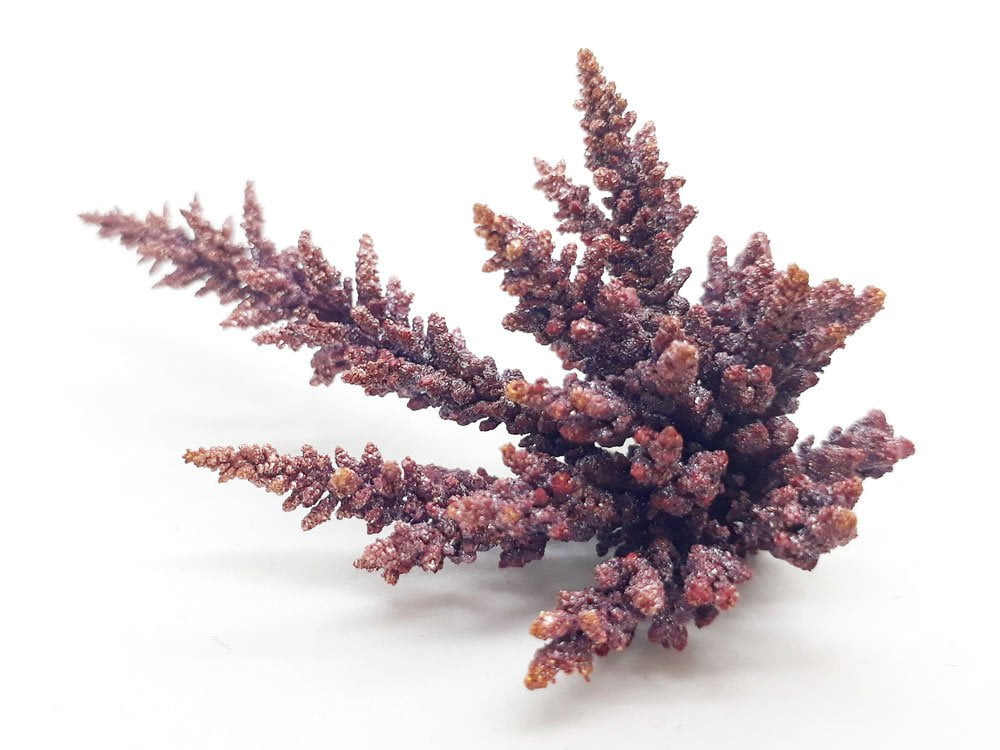 What I mentioned previously is highlighted in this picture. The base of the crystal (bottom right), which oxidized when I took it out of solution on the 5th day, is darker than the crystal branches that grew quickly as I re-submerged the crystal and upped the current. These branches remain shiny to this day.

Finally, I decided that I would try to make a copper tree.

I bent some copper wire into shape, then stuck the whole thing in solution: 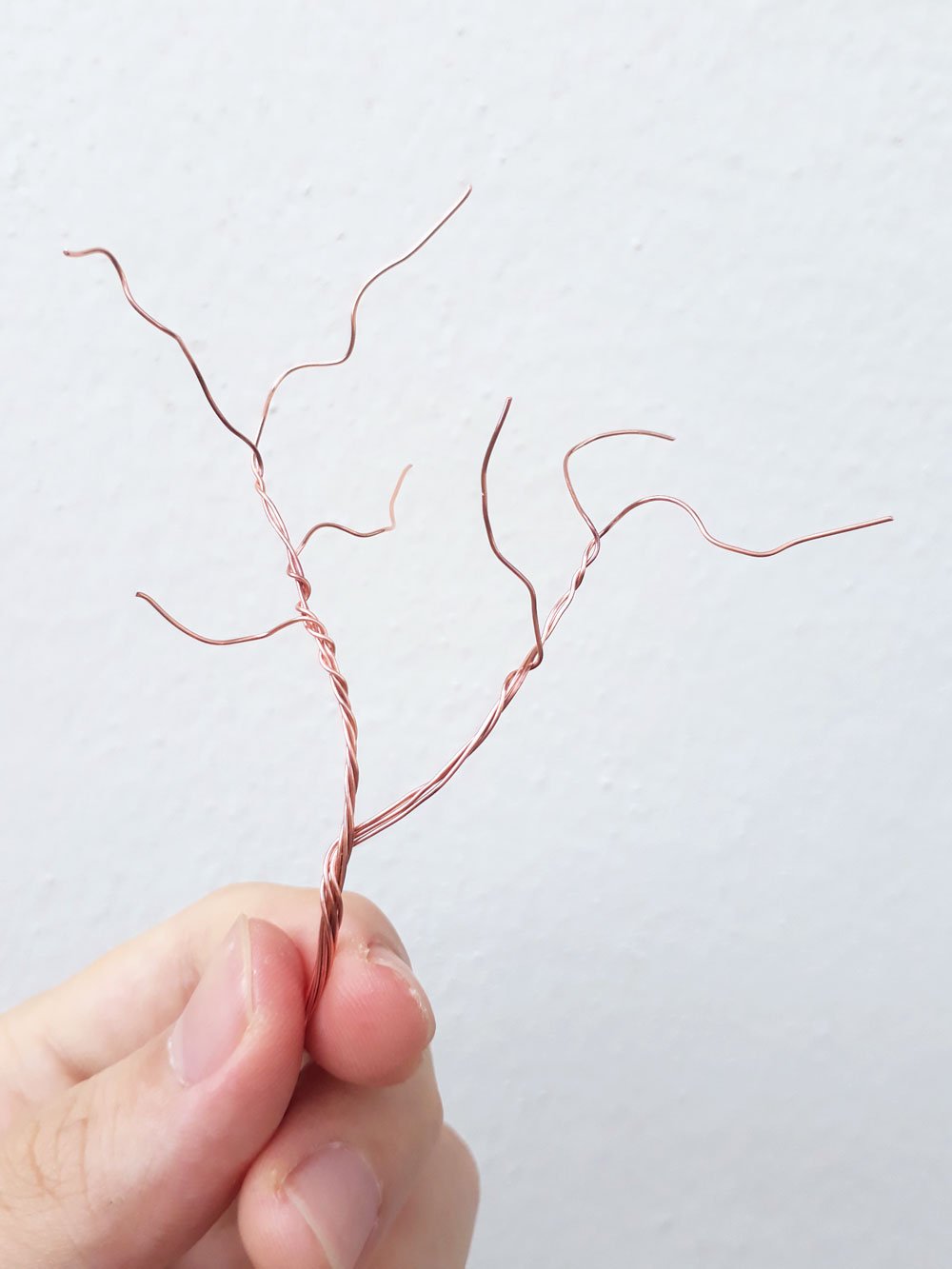 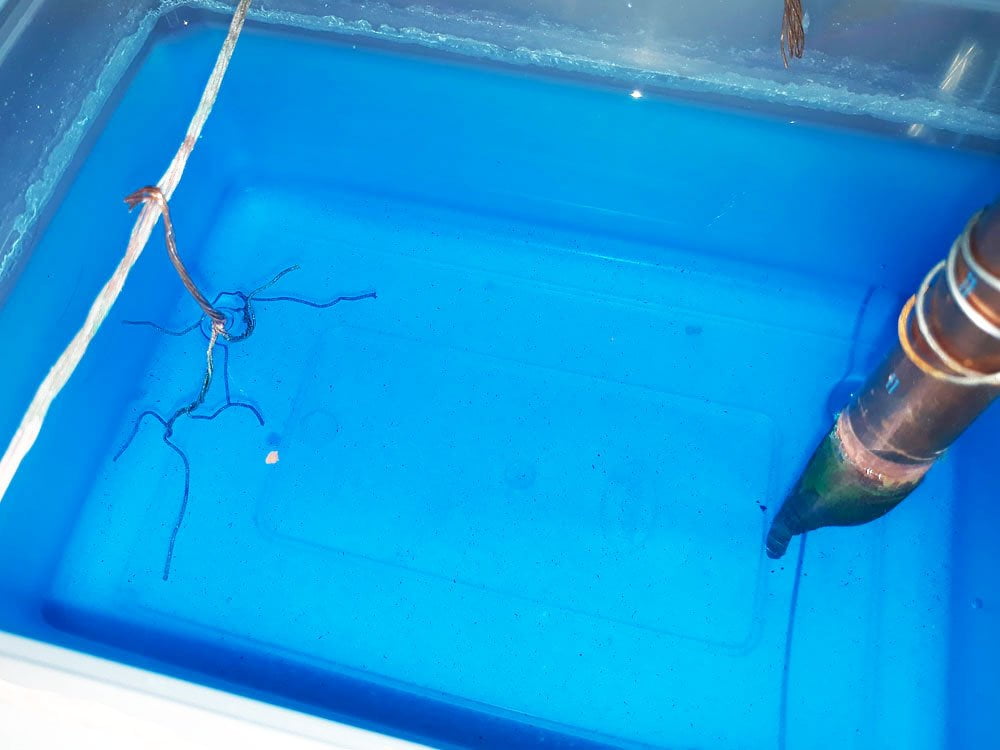 On the first week, I set the current at 0.01A to give a more even coating to the branches. Then, on the second week, I increased it to 0.03A to form the leaves. 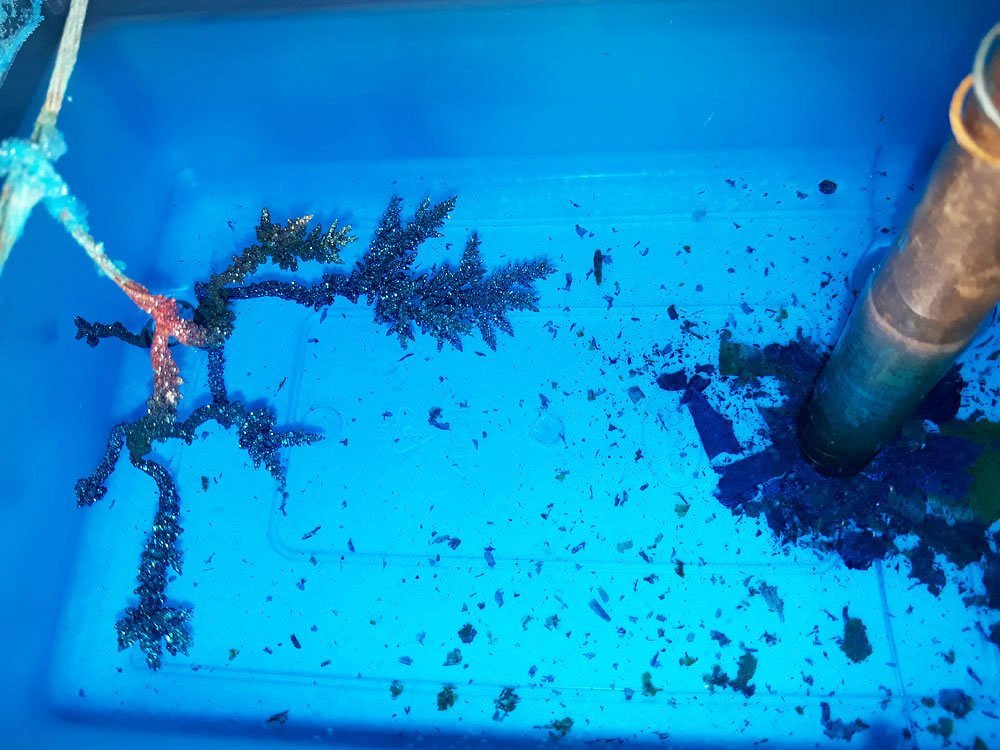 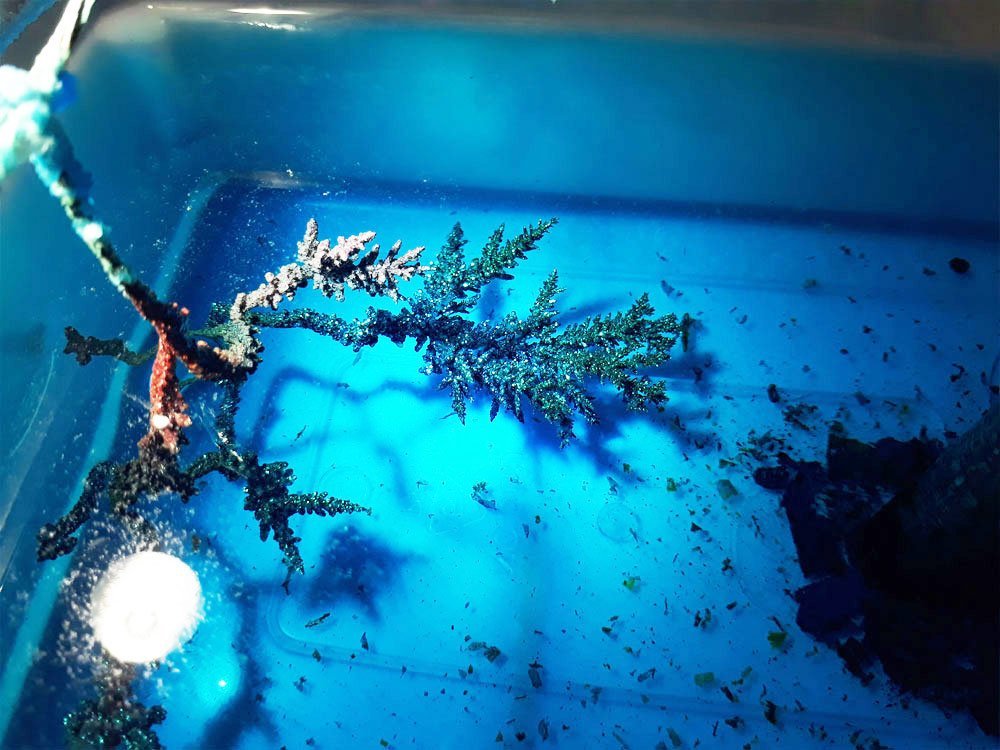 The crystals have a tendency to form on sharp points, and so the majority of the clusters grew on the tips of the wires, and not the branches.

As the crystals lengthened and approached the copper pipe, the resistance of the solution began to decrease. Consequently, the crystals at the tips of the leaves grew much more quickly, but were also smaller in size. 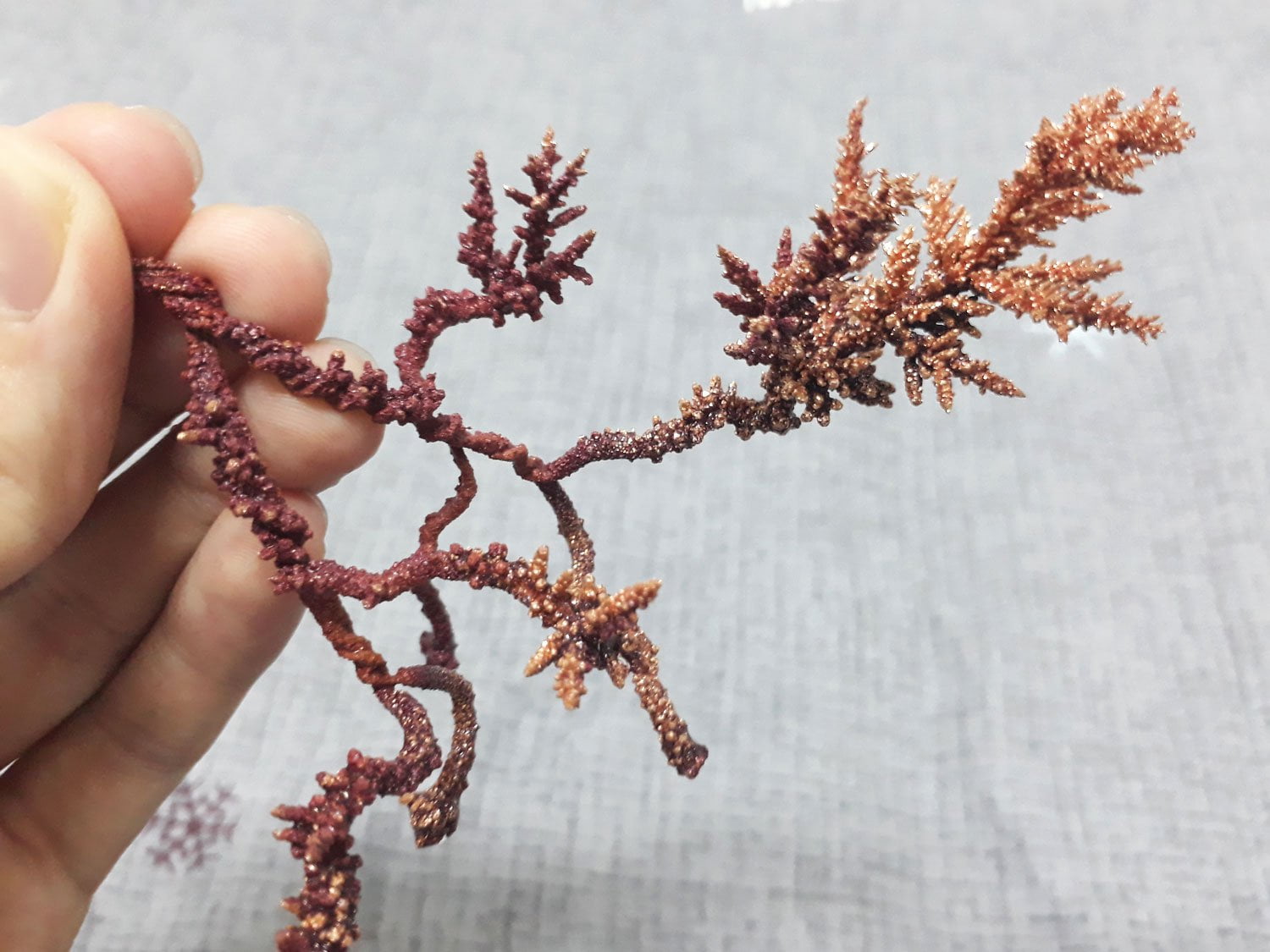 It looks really beautiful, with the shinier leaves that somewhat resembling corals growing from the duller, reddish brown branches. Here, you can clearly see that the crystals at the tips of the leaves are much finer than the ones closer to the trunk.

Though unfortunate, it should come as no surprise that the biggest crystal broke off again while I was handling the tree, a few days after the photo above was taken. 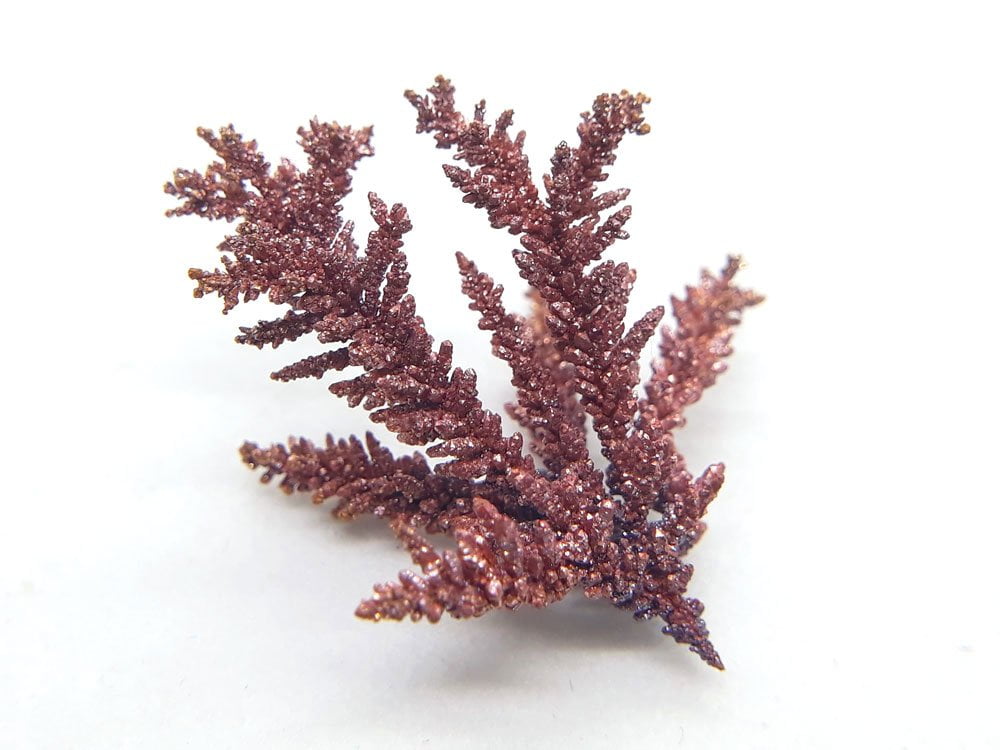 It looks more like a flower now. Oh well.

So there you have it. My best specimens of copper metal crystals. 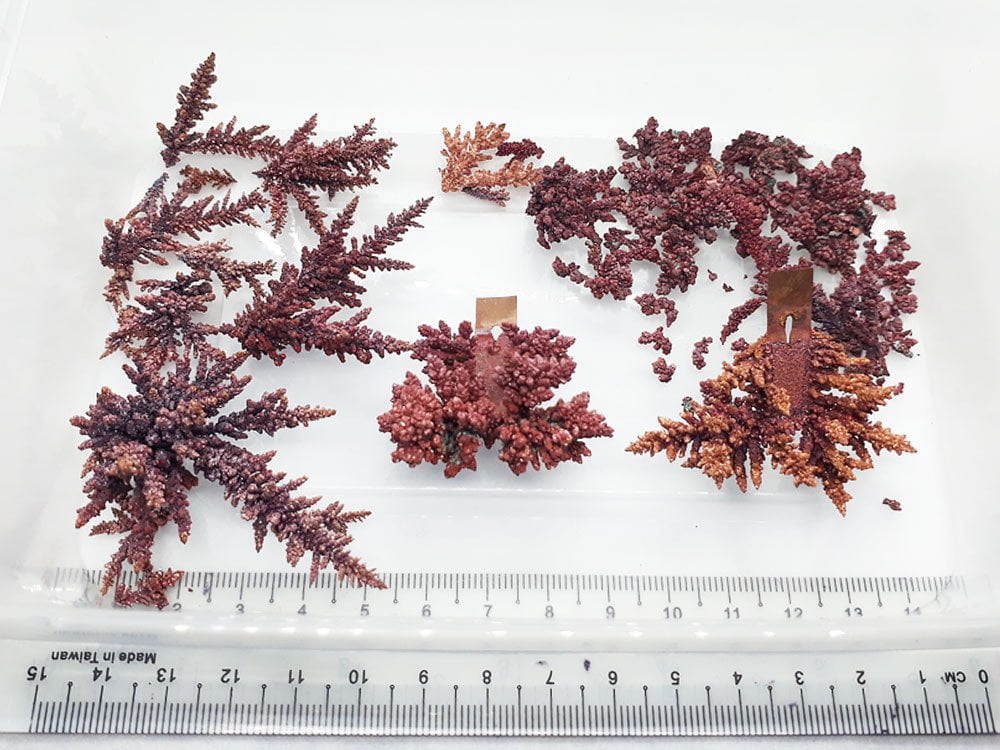 Let’s summarize my procedure and my observations. 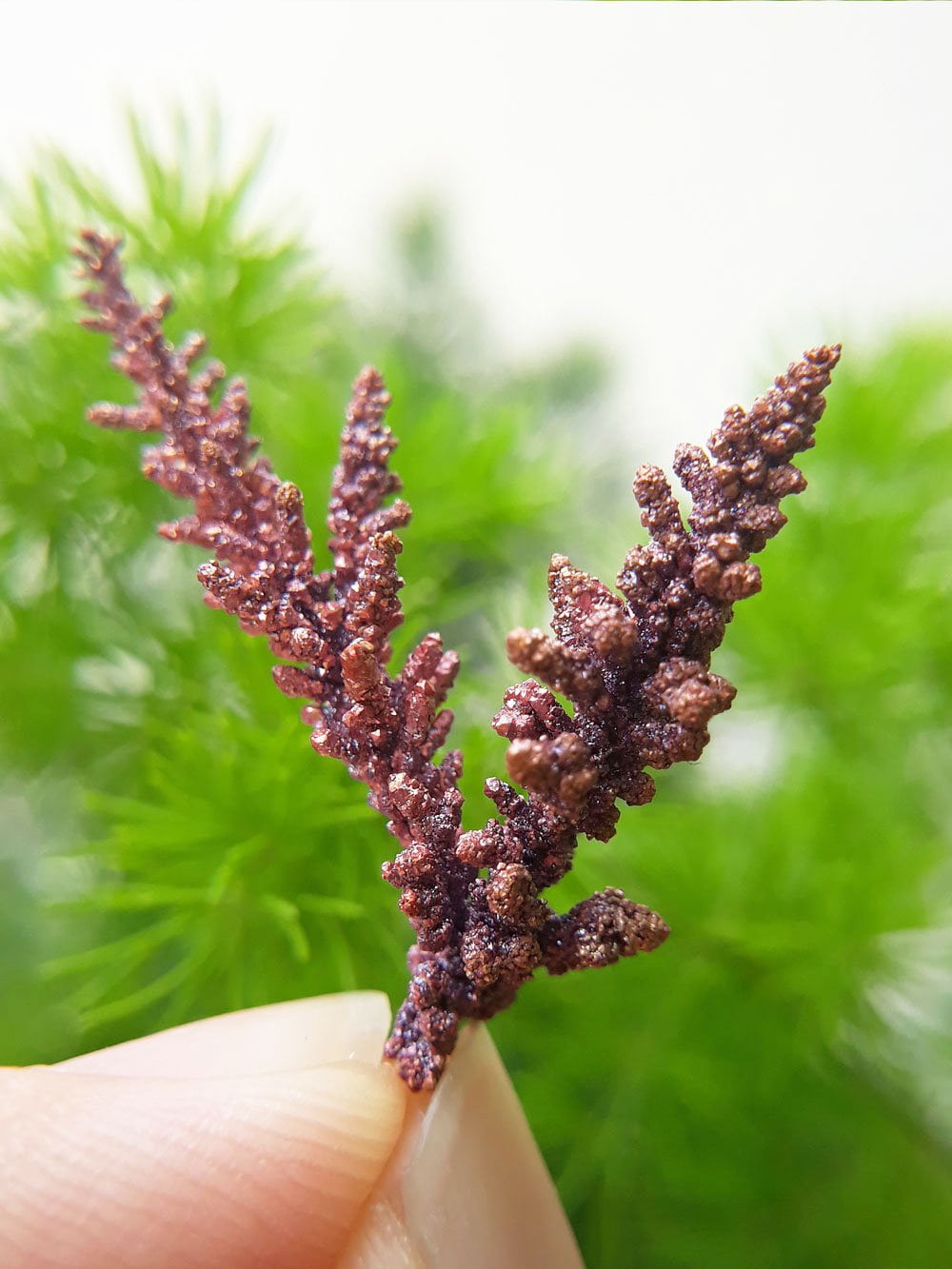 Note: In this case, anode and cathode mean positive and negative terminal respectively. 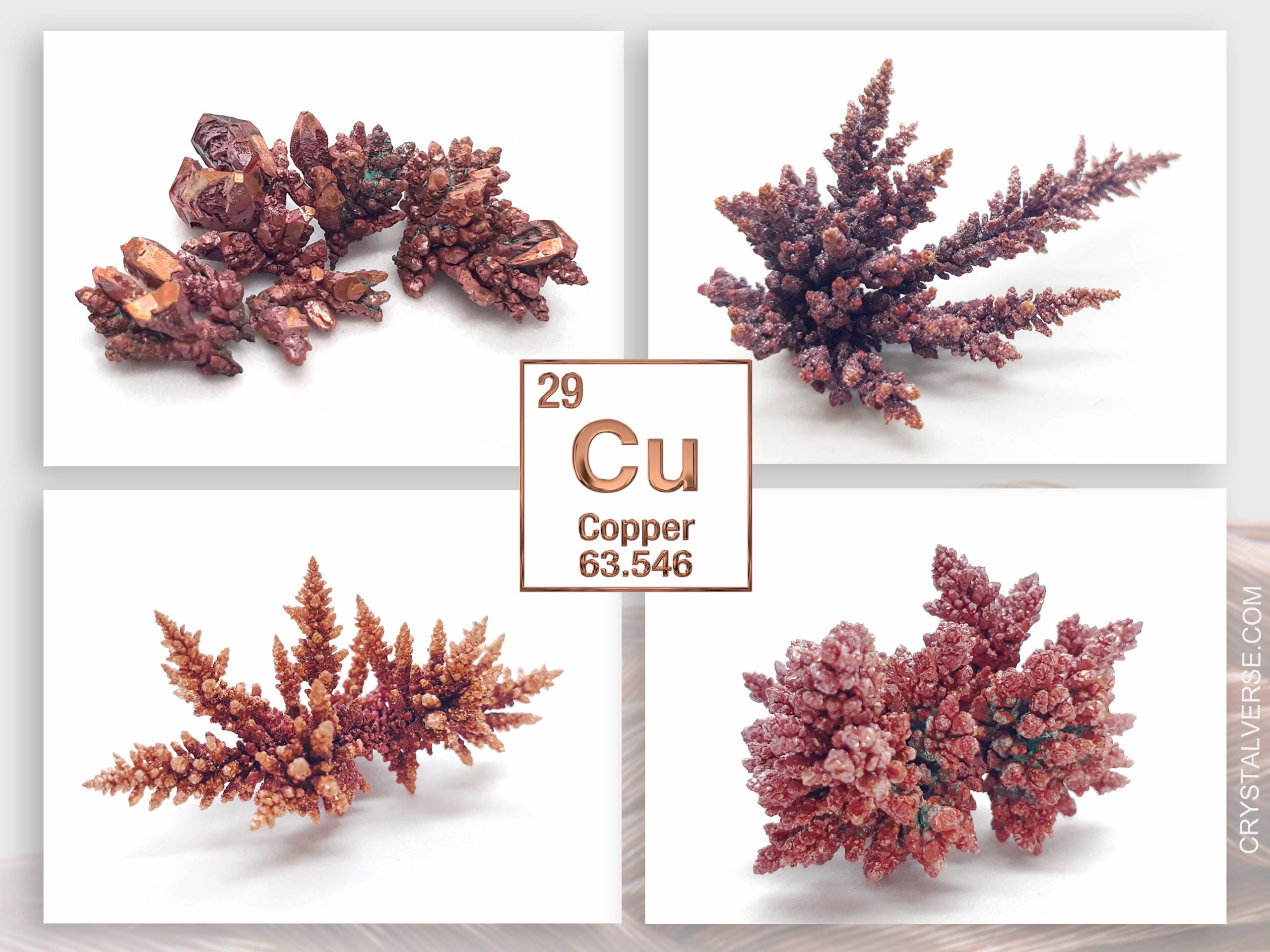 In the future, I plan to:

That’s all for now. I hope you enjoyed my post 🙂

If you have any questions, feel free to ask below.

If you’ve made it to the end, then I’m glad that you liked the crystals just as much as I do. You might also enjoy learning how to grow stunning copper sulfate crystals.

Thank you for reading.